Fanack Home / Syria / History of Syria from Past to Present / Amid New Syria Peace Talks in Geneva, No Accountability for Chemical Attacks

Amid New Syria Peace Talks in Geneva, No Accountability for Chemical Attacks

In a report released on 26 October 2017, the United Nations Security Council (UNSC) confirmed that the Syrian government was behind a chemical attack that killed dozens of people in Khan Sheikhoun, a rebel-held town in north-western Syria, in April 2017. Following the release of the report, Russia used its veto in the UNSC to prevent any further official investigation into the matter.

In order to investigate chemical attacks, the UN relies on the Organization for the Prohibition of Chemical Weapons (OPCW). The organization exists to promote and verify adherence to the Chemical Weapons Convention, which prohibits the use of chemical weapons and requires their destruction. However, its main role is documenting suspected chemical attacks and carrying out on-site inspections. In August 2015, the UNSC adopted Resolution 2235, establishing the Joint Investigative Mechanism (JIM) whose mission is to determine which country or party is responsible for the chemical attacks documented by the OPCW.

The JIM’s first report on Syria, published on 24 August 2016, alleged the use of chemical weapons, specifically sarin gas, by the regime at least twice, in Talmenes in April 2014 and Sarmin in March 2015. The gas causes foaming at the mouth, spasms, permanent neurological damage and, ultimately, death by cardiac arrest or suffocation. The regime has always denied the allegations.

The JIM’s mandate was renewed a year after its creation, but on 17 November 2017, Russia again used it veto to prevent the mandate being renewed for a second time. A draft resolution put forward by Japan would have extended the JIM for 30 days to allow time for negotiations on a wider compromise.

“Russia is wasting our time,” US Ambassador Nikki Haley told the council after the vote. “Russia has no interest in finding ground with the rest of this council to save the JIM. Russia will not agree to any mechanism that might shine a spotlight on the use of chemical weapons by its ally, the Syrian regime. It’s as simple and shameful as that.”

Prior to the vote, Rogelio Pfirter, former director general of the OPCW, had written on Syria Deeply, a website dedicated to covering the Syrian conflict, ‘I see no grounds to question the impartiality or quality of the investigations carried out by recognized OPCW and UN experts.’ He was then hoping for an agreement at the UNSC before the end of the mandate, which ultimately did not happen. Without this UN cooperative, he wrote, ‘efforts towards the complete elimination of chemical weapons in Syria will be undermined, and justice for the victims of chemical attacks will be denied’.

The same recommendations had been made by Human Rights Watch (HRW) at the end of October 2017. In a press release, Deputy Emergencies Director Ole Solvang said, “The Joint Investigative Mechanism report should end the deception and false theories that have been spread by the Syrian government. Syria’s repeated use of chemical weapons poses a serious threat to the international ban against the use of chemical weapons. All countries have an interest in sending a strong signal that these atrocities will not be tolerated.”

He added, “Russia called for an independent investigation and here is the result. The question now is whether Russia will support accountability for the violation of these international norms or whether it will sacrifice principle to protect its Syrian ally.”

The most recent Russian veto answered his question: for now there will be no accountability. “The OCPW continues its mission, but there is no more mechanism at the international level to put names on these proven attacks,” Nadim Houry, director of HRW’s terrorism and counterterrorism programme, told Fanack Chronicle. “For us, the main question is: how should it be moved forward? We need to find another way to name the perpetrators of these crimes and bring them to justice.”

He added, “There should be accountability here, and this could take several forms. The UN could put it on the agenda, or several countries that care about the issue, like France for example, could make sure there is a follow-up. Will it affect Syria in the future? Definitely. But will it actually happen? It really depends on other countries’ reactions because with Russia it’s clear: they don’t want to make a big fuss about it. Also, it’s about setting an example, it’s about the issue of chemical weapons use worldwide, not just in Syria.”

As the latest Syria peace talks continue in Geneva, Switzerland, few are optimistic of a breakthrough. After months of stalemate, the talks are expected to focus primarily on a new constitution and elections, with little likelihood that chemical attacks will be mentioned at all. 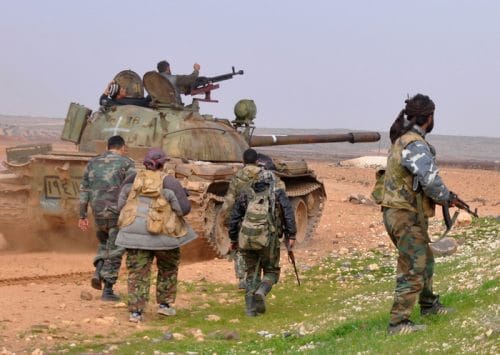 Muted International Response to Air Strikes, Chemical Attacks in Syria
‘Russia’s de-escalation zones are now crumbling, as all major actors inside and outside Syria now seek to define the...