No Clear Funding or Reconstruction Plan for Syria

During April 2018’s Brussels Conference on Supporting the Future of Syria and the Region, the international community made clear that the European Union (EU) and the United Nations (UN) will not support reconstruction in the country unless clear political reforms are made.

“We stated here again that the money for the reconstruction of the country will come only once the political process started and is well underway under UN auspices,” said EU High Representative Federica Mogherini. She also questioned the practicality of the process: “Who do you give the money to? Is it realistic to think that any international institution gives the money to [Syrian President Bashar] al-Assad?”

Speaking after a September 2017 meeting of around 14 countries that back the Syrian opposition, Boris Johnson, then British foreign secretary, said, “We believe that the only way forward is to get a political process going and to make it clear to the Iranians, Russians and Assad regime that we, the like-minded group, will not support the reconstruction of Syria until there is such a political process and that means, as [United Nations Security Council] Resolution 2254 says, to a transition away from Assad.”

Resolution 2254 was adopted on 18 December 2015. It demands that all parties immediately cease attacks on civilian targets, urges member states to support efforts to achieve a ceasefire and requests the UN to convene the parties to engage in formal negotiations.

In July 2018, Russian President Vladimir Putin urged world powers to help Syria’s economic recovery and allow refugees to return home, saying, “We need to strengthen the humanitarian effort in the Syrian conflict. By that, I mean above all humanitarian aid to the Syrian people, and help the regions where refugees living abroad can return to.” This would mean rebuilding housing, health and sanitary infrastructure as well as redeveloping local industries. François Delattre, the Permanent Representative of France to the UN, responded to Putin’s statement by saying, “We will not take part in the rebuilding of Syria unless a political transition is effectively carried out with constitutional and electoral processes conducted in a sincere and meaningful way.”

This requirement for political reform puts Syria’s reconstruction at risk as its allies are unlikely to give as much as needed, a sum estimated at $250 billion by Staffan de Mistura, the United Nations Special Envoy for Syria.

“There is no clear source of funding for Syria’s reconstruction,” Sam Heller, senior analyst at the Crisis Group, told Fanack. “The Syrian government has taken steps to mobilize capital from individual investors, including establishing legal frameworks for property seizure and redevelopment and engaging regional investors. Moreover, it expects that returning refugees will also contribute to a sort of organic reconstruction as they restore their own communities. Still, these contributions will fall far short of the hun-dreds of billions estimated to be necessary for fully rebuilding Syria. Syria’s allies Russia and Iran and friendly countries like India seem ready to participate in reconstruction but not themselves invest on that huge scale.”

Syrians clear up the rubble of their houses that were destroyed during clashes on the outskirts of Raqa, on July 19, 2017. Photo AFPChina is now one of the favorites to benefit from Syria’s rebuilding. In addition to the $2 billion China pledged to invest in Syrian industry last year, Beijing announced during the 8th China-Arab States Co-operation Forum in July 2018 a further $23 billion in loans and aid for the Arab region, including $90 million in humanitarian aid for Yemen, Lebanon, Jordan and Syria. Yet it is still not clear how much would go to Syria itself, and it is unlikely to match the needs on the ground.

In the meantime, Russia has promised to help Syria rebuild, based on its own post-war experience. “It is necessary to use our domestic post-war experience in the reconstruction of the country as well as useful solutions used in other states affected by modern local wars and armed conflicts,” said Colonel General Mikhail Mizintsev in July. “On this basis, I ask you to prepare the relevant analytical material and bring it to the Syrian side.”

In August, Iran also promised its help. Iranian Defence Minister Amir Hatami said that Iran had agreed with Syria that Iran would have a “presence, participation and assistance” in reconstruction “and no third party will be influential in this issue”. No details have yet been released regarding the scale of this assistance.

For Heller, the situation gives Western countries leverage in negotiations on political reform. “But it’s not clear they can actually use that leverage effectively,” he added. “And Damascus and its Russian ally seem to recognize their own leverage, as they link reconstruction funds to refugee return and play on European domestic political pressures related to migration and refugees to push for a European contribution to reconstruction.”

Also in August, Saudi Arabia pledged to give $100 million to a US-backed ‘stabilization’ campaign aimed at areas formerly controlled by Islamic State (IS), which seized large parts of Iraq and Syria in 2014, including the Syrian city of Raqqa. The Saudi embassy in Washington said that it ‘will play a critical role in the coalition’s efforts to revitalize communities, such as Raqqa, that have been devastated by [IS] terrorists’, adding the money would ‘save lives, help facilitate the return of displaced Syrians and help ensure that [IS] cannot re-emerge to threaten Syria, its neighbors or plan attacks against the international community’.

The Saudi pledge, like the $550 million from the United Arab Emirates for the stabilization of Raqqa, are not meant directly for the country’s reconstruction but to assist areas largely wiped out during the anti-IS offensive. The US-led coalition has refused to endorse the Syrian government, accusing it of war crimes, and has declined to provide support to areas under its control.

In response, Syria rejected Saudi and Emirati reconstruction efforts, with the Syrian Foreign Minister Walid Muallem denouncing Saudi Arabia’s “flawed decision”. According to the Syrian Arab News Agency, he said, “Saudi authorities, who conspired against the interests of our Arab nation, announced the provision of $100 million to the international coalition led by the United States of America outside of international legitimacy and in defiance of the UN Security Council resolutions related to the crisis in Syria.”

On 19 August, US President Donald Trump said the US had ended “the ridiculous” $230 million in civilian funds it provides for Syria, adding that it would be “Saudi Arabia and other rich countries in the Middle East” that “will start making payments”. This should de facto diminish their influence over any political reform that would take place.

On the ground, no one knows how large-scale reconstruction will eventually happen or even when it will start. With no clear economic or political view of the future, refugees might not be tempted to return home. Reconstruction has already become so political, even before the war has ended, that a solution to the issue might take years to be found. 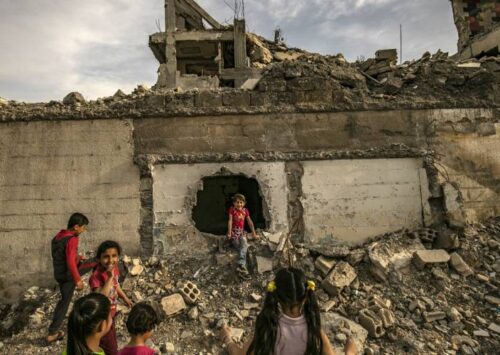 In Syria, Lack of International Recognition for Raqqa’s Civilian Administration Hampering Reconstruction
Tens of thousands of people who left the city before the final battle have now returned. But life is far from easy: most...