Fanack Home / Syria / History of Syria from Past to Present / There will be ‘No Winners’ in Syrian War, as Conflict deepens

There will be ‘No Winners’ in Syrian War, as Conflict deepens

Backed by Russian air forces and Iranian and Lebanese Hezbollah advisers and fighters, Syrian President Bashar al-Assad has been regaining territories that were controlled by rebels and the Islamic State (IS).

During the first half of 2016, al-Assad’s troops seized terrain in Idlib and recaptured Palmyra. In August 2016, they were besieging rebel-controlled Aleppo, the second largest city in the war-torn country.

Would al-Assad have been able to retake control of these territories without the military intervention of Russia?

Analysts told Fanack they believe that despite the help of Iran since the start of the war in 2011, and later of Hezbollah fighters, the al-Assad regime was on the verge of collapse in 2015. But Russia changed things when it sent in its air force in September 2015.

A month later, General John Allen, former US Special Envoy for the Global Coalition to Counter IS, accused the Russians of stepping in to save al-Assad from collapse and not to fight jihadists. “The sense that Russians have played a strategic role in the region, I think is eclipsed by the reality that the al-Assad regime was in serious trouble. He was in trouble for a whole variety of reasons and what we see here is that the Russians are intervening to keep a client from collapsing,” Allen said in an interview with The Jordan Times and Al Rai dailies in Amman.

According to think tank Carnegie Endowment for International Peace, various surveys indicate that only around a fifth of Russian airstrikes has been aimed at IS targets.

Asad al-Zoubi, a leading figure in the Syrian opposition and a Syrian army defector, told the Dubai-based Al Arabiya news channel that most Russian airstrikes are targeting Sunni rebels in Aleppo and the southern province of Deraa.

“The Russians came to Syria only to protect the al-Assad regime. He is their man in the region,” he added.

Al-Zoubi accused the US of failing the Syrian people by allowing the Russians to manage the Syrian issue.

The gains the al-Assad regime has made against IS and Sunni rebels, with Russian assistance, serve Moscow’s regional agenda, according to Amman-based political analyst Feisal Malkawi.

“The Russians want to convince the world that al-Assad should remain in power at least until his term ends in 2017, otherwise Syria will fall in the hands of terrorists,” Malkawi told Fanack. He believes Moscow is aware that military intervention will not end the conflict.

“The Putin administration wants al-Assad to look stronger when negotiating a peace deal with the international community. They know that only a political settlement can end the war in Syria.”

Raed Omari, a political analyst and columnist at Al Arabiya English, said no winners will emerge from the civil war, including al-Assad, despite the gains his forces have made over the past ten months.

“The only way to achieve peace in Syria is to form a transitional government from all warring parties,” Omari said in a phone interview.

According to Omari, 2017 will be decisive in the Syrian crisis as al-Assad’s term comes to an end. “I don’t think the Russians will insist on keeping al-Assad in power or as part of a transitional government. What they want is to keep figures from the regime that could be accepted by regional and international players,” he added.

No change in Turkey-Syria relations

Ankara and Moscow agreed in July 2016 to normalise relations to end nearly eight months of tension after a Turkish F-16 fighter shot down a Russian SU-24 bomber carrying out missions over Syria, killing two Russian servicemen.

The Syrian opposition feared such a move would jeopardise Turkey‘s support to rebels fighting al-Assad.

But president of the Istanbul-based National Coalition of Syrian Revolution and Opposition Forces, Anas Abdah, told Al Arabiya that the Syrian opposition received assurances from Turkish officials that there would be “no changes” in Turkey’s Syria policy.

“Al-Assad is, at the end of the day, a killer. He is torturing his own people. We’re not going to change our stance on that,” a senior Turkish official from the ruling AKP party told Reuters.

“We believe closer cooperation between Turkey and Russia could help address the situation in Syria,” another official, speaking on condition of anonymity, told The Telegraph. He added that there were no “concrete plans” for cooperation yet.

In early June 2016, Russia’s Foreign Minister Sergey Lavrov said Washington had asked Moscow not to target al-Nusra Front, a jihadist group in Syria, but the US insisted that it only wants Russia to select it targets carefully to avoid hitting civilians and legitimate opposition groups, according to the Associated Press (AP).

Lavrov said that Russia has long insisted that the moderate, US-backed opposition groups should leave the areas occupied by al-Nusra Front, which was at the time still al-Qaeda affiliated.

US State Department spokesman Mark Toner, speaking to reporters in Washington, said that Secretary of State John Kerry had emphasized the need for Russia to distinguish between IS and al-Nusra Front on one side, and legitimate opposition units on the other.

On 28 July 2016, al-Nusra Front announced it was ending its relationship with al-Qaeda, to remove a pretext used by world powers to attack Syrians, according to Reuters.

In the first known video statement ever to show his face, al-Nusra’s leader, Abu Mohammed al-Golani, announced that the group would re-form under a new name, Jabhat Fatah al-Sham, with “no ties with any foreign party”.

Earlier that day, the current al-Qaeda leader, Ayman al-Zawahiri, gave al-Nusra Front his blessing to break away. In his message, al-Golani thanked al-Zawahiri for putting the interests of Syrians ahead of organizational concerns.

The move appeared to be an attempt to appeal to Syrians who have long had deep misgivings about al-Nusra’s links with al-Qaeda and the presence of foreign jihadists in its ranks. It could alter the strategic alignment on the ground if the renamed al-Nusra gains acceptance among other rebel groups, according to Reuters.

But al-Assad and his Russian allies are unlikely to accept the rebranding as a reason to halt military operations that have put the Syrian leader in the strongest position on the battlefield for years.

Al-Nusra Front, one of the most powerful rebel forces in Syria’s five-year, multi-sided civil war, was excluded along with IS from a US- and Russian-backed ceasefire in 2016.

Al-Nusra is listed as a terrorist organization by the US and the United Nations (UN). Al-Assad’s other opponents have long said its presence gave the government and its Russian allies a pretext to abandon the truce and launch advances under the cover of anti-terrorist operations permitted under the ceasefire.

The US State Department said al-Nusra Front fighters remained a legitimate target for US warplanes for now.

Intense fighting continued in August around Aleppo, where a rebel offensive is trying to break the government siege of rebel-held areas in the eastern part of the city, according to the BBC. The UN estimates that some 300,000 people are trapped with dwindling food and medical supplies in this part of Aleppo, according to Al Jazeera.

But the government-held western part of Aleppo, home to two million people, has found itself in increasing trouble. On 5 August, the UN demanded a full-fledged ceasefire or weekly 48-hour humanitarian pauses to reach the suffering population. These demands have not yet been met. 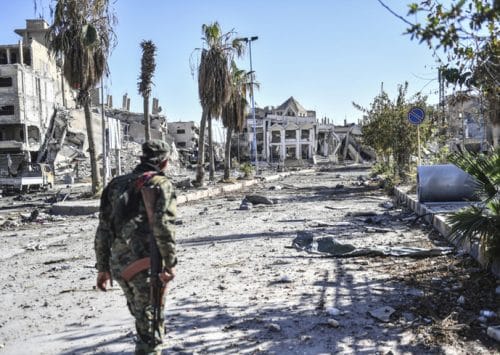 Raqqa Liberated from IS, But Who Will Pay for the Reconstruction?
In the meantime, a recently formed civil council has divided the city into 16 neighbourhoods in order to coordinate the ...