The Unsteady Position of Idlib in Syria’s War

Government shelling of the northern area of the Syrian province Idlib, where three million civilians live, began at the end of November 2018, breaking a Russian-Turkish agreement set up in mid-September 2018 to avoid a military escalation in the area. Among an array of factions controlling Idlib, the dominant force is Tahrir al-Sham (HTS), an alliance dominated by fighters linked to Al Qaeda. Tensions remains high, despite Russia and Turkey’s efforts to maintain calm.

In early December 2018, regime artillery shelled Idlib, causing civilian causalities; the rebels reportedly responded with rocket fire. At least 18 civilians have been killed and 51 others wounded in bombardments since 30 November, according to local activists, which violates the Russian-Turkish agreement to make Idlib a buffer zone where no fighting is allowed.

Russia and Turkey are the main international actors in Idlib as well as the guarantors of the “observation of the ceasefire,” despite their opposing interests on the ground; the third guarantor is Iran, which supports the Bashar al Assad regime. Rounding out the list of actors is the US-led coalition of foreign powers fighting terrorist groups. Russia is the Syrian regime’s main ally while Turkey is the main ally of Syrian rebels–even controlling several areas in northern Syria, including Idlib, Afrin and the area near Jarabulus.

The Russian-Turkish agreement, sent to United Nations Secretary General Antonio Guterres and the president of the Security Council, lists a 10-point plan to avoid an offensive in the northwestern Syrian province. The demilitarized zone would go “15-20 kms deep into the de-escalation area” and an Iranian-Russian-Turkish coordination centre would play a role in implementing the ceasefire.

“Effective measures will be taken to ensure a sustainable ceasefire regime within the Idlib de-escalation area. In this regard, the functions of the Joint Iranian-Russian-Turkish Coordination Centre will be enhanced,” the agreement stated. The document also declares that transit traffic “on the routes M4 (Aleppo-Latakia) and M5 (Aleppo-Hama) will be restored by the end of 2018.”

“After the mid-September Russian-Turkish agreement, the situation became relatively calm,” Armenak Tokmajyan, Syria fellow at the International Crisis Group, told Fanack. “Recently, however, the reciprocal shelling between the regime and the rebels intensified and both sides began reinforcing their positions on the front line. Turkey and Russia, the two main relevant international actors in Idlib, have engaged to manage the situation.”

With the rise of tensions between the regime and the rebels in the area, residents are already losing hope and fleeing their homes in order to seek shelter elsewhere.

For example, Jarjanaz, a rural town with a pre-war population of nearly 11,000 inhabitants, has reportedly seen the exodus of over 70 per cent of its inhabitants since the resumption of clashes.

“A full-scale regime offensive on Idlib and adjacent areas held by the rebels, where about three million IDPs and locals reside, would lead to a major humanitarian crisis,” Tokmajyan said. “While some might [stay put and] let the attacking forces roll over them, others will be pushed closer to the Turkish border in search of safety.”

Ali Alibrahim, a Syrian journalist who won the 2018 Young Journalist Award from the BBC, told Fanack that “civilians don’t want to live under Assad.” He says the best solution for them would be to live under Turkish rule. “Three million civilians are helpless and struggling to find ways to keep their families safe in the event of an attack,” Alibrahim said. “We are certain the regime will try the same tactics [as before] and drop chemical weapons on the civilians. Around 1.5 million people currently displaced in Idlib fled there from those previous battles in Ghouta, Aleppo and Homs. If another offensive is launched with as little regard for civilian life, it would generate a catastrophic humanitarian crisis. Turkey is an option for the people living in Idlib, whose lives are now in the hands of Russia and Turkey.”

Turkey, however, has made clear it is Europe that would have to face a new wave of refugees if Idlib was to become a battle scene. Turkey’s presidential spokesperson has said a major offensive targeting the northwestern province could cause a new refugee crisis from Turkey to Europe. “Everyone’s common point is that the solution must be political rather than military,” Ibrahim Kalin said in the capital Ankara. He added that: “Of course, a new wave of migration would not only put a burden on Turkey–it could cause a new chain of crises from here to Europe. Nobody wants that.”

Therefore, it is vital for Idlib residents that Russia and Turkey put pressure on their own allies in order to keep them safe. But in case of an end to the ceasefire, Alibrahim said, “it is essential that all parties to the conflict refrain from attacking civilians, grant safe passage to civilians wishing to flee the fighting and ensure unimpeded access to humanitarian relief for all civilians in need.”

For now, Turkey has urged civilians in Idlib to stand against the al-Qaida-linked groups, according to the pro-government al-Watan newspaper. According to Maxwell B. Markusen, associate director and fellow at the Center for Strategic and International Studies, HTS elements should not remain as a power group in the city: “[They] have expressed a willingness to defend Idlib until the end, but in the case of a major regime offensive, are equally likely to move underground–just as Islamic State militants have done throughout Iraq and Syria–raising questions for the next iteration of both the Syrian opposition and the Salafi-jihadi movement in Syria.” He added that “there is a distinct possibility that al Assad will soon solidify his gains and call for the withdrawal of all foreign forces, including Turkey and the United States, which raises the question of whether he can effectively reassert control over Syria without the assistance of Iran or Hezbollah and other Shia militias.” That would mean that, in the case of a victory led by the regime and its Russian ally, what would be left of Idlib could end up under the regime’s control, just like Homs and Ghouta. The question remains whether any citizen would actually stay or leave for Turkey instead.

Idlib is the last major stronghold of the rebel and jihadi groups, which have been trying to overthrow al Assad for the past seven years. With only a few territories scattered around in the country left, if Idlib is taken by the government, it would mark the rebels’ final defeat. 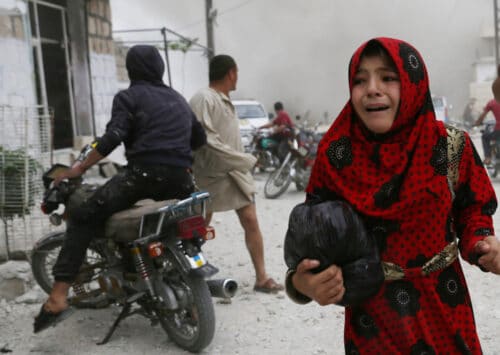