Fanack Home / Syria / History of Syria from Past to Present / In Syria, Pro-Regime Militias could become Organized Crime Groups When War ends

Before the Russian intervention that turned the tide of the Syrian civil war in the regime’s favour in 2015, President Bashar al-Assad relied heavily on loyalist militias – or shabiha – to beat back the rebel groups that were seeking to depose him.

The regime still needs the militias, given the difficulties in filling the ranks of the regular army. At the same time, the militias have become a liability, as their lawless behaviour has in some cases angered local populations, including those loyal to al-Assad.

Although the government has taken several steps to clamp down on abuses by the militias, it seems clear that al-Assad does not have the capacity or perhaps the desire to control his supporters.

The government has relied on loyalist militias since the beginning of the Syrian uprising in 2011, when so-called ‘Popular Committees’ sprung up all over Syria. Many, although certainly not all, of the members were recruited from al-Assad’s Alawite sect and other minorities that tended to be loyal to the regime, and they received support from the intelligence services to violently put down anti-government protests.

Over time, these groups multiplied and militarized. In 2013, the Syrian regime took steps to formalize – and made attempts to organize – the disparate Popular Committees into a national paramilitary structure called the National Defence Forces (NDF).

As the conflict growing, the local militias were also joined by Iran-backed foreign fighters from Hezbollah and other groups. Iran also provided training and funding for the local pro-al-Assad militia, but Iran may have preferred to rely on the foreign fighters ‘whose religious and ideological motivations have made them more loyal’, as noted by Syrian journalist Lina Sinjab.

For the Syrian government, the shabiha became an important source of manpower. With many young men defecting or fleeing the country to avoid military service, the ranks of the regular Syrian army had shrunk from about 220,000 to an ‘effective strength’ of half that by autumn 2012, according to the International Institute for Strategic Studies.

Furthermore, the Sunni fighters remaining in the army were regarded as potential defectors, motivating the regime to rely more heavily on the Alawite and Shia militias.

In some cases, young men also prefer joining militias to the regular Syrian army because the pay is often higher, particularly in militias with foreign funding. The militias may allow them to remain closer to home as well as giving them the freedom to leave if they so choose, unlike the army.

The pro-government militias were estimates to have between 150,000 and 200,000 members as of late 2015, including both local and foreign forces. More recently, the newspaper al-Sharq al-Awsat cited ‘informed sources’ as putting the shabiha number at about 60,000 – roughly the same as the official Syrian armed forces.

Meanwhile, in many parts of the country, the militias have seized control of key routes and institutions. For instance, according to Syrian researcher Mazen Ezzi, the Liwa al-Baqir militia controls Aleppo’s public transportation system with its own fleet of minibuses, sharing revenues with the government’s Traffic Police Department and Military Security.

Along with expanded control has come complaints about the militias extorting traders, businesses and average citizens for protection fees or other forms of bribes; insulting or abusing people at checkpoints; and charging exorbitant prices for basic goods for which they control the market.

There have also been accusations of looting in areas where the militias have worked alone or with the Syrian army to seize territory from rebel groups. In the Yarmouk refugee camp in Damascus, for instance, the Action Group for Palestinians of Syria claimed that houses and shops in the camp ‘have been subjected to a systematic campaign of looting’ by soldiers and militia members involved in a recent offensive to retake the enclave and oust Islamic State fighters.

There have also been more serious incidents involving extrajudicial killings by militia members, including of women and children.

In Aleppo, Ahmed Jawish, a 13-year-old boy selling gum and crackers on the street was shot and killed in June 2017 by a driver believed to be a militia member, sparking outrage in the community.

In May 2018, according to Syrian news site Enab Baladi, pro-regime militia members allegedly burned two women – along with their barley fields – in the north-western Hama region, after they refused to pay fees to allow the crop to be harvested.

In some cases, clashes have even broken out between the Syrian army and militias ostensibly loyal to the regime, as in April 2015, when members of the NDF fought against the Syrian army in Homs amid a crackdown on criminal behaviour by the NDF, with casualties on both sides. Clashes broke out in the same area in early 2016.

The Syrian regime and its ally, Russia, have taken some measures to clamp down on the militias in especially egregious cases. Jawish’s killing in Aleppo, for instance, inspired a crackdown in which government forces reportedly rounded up ‘hundreds’ of militia members and arrested the man allegedly responsible for the murder.

Following the looting in Yarmouk, Syrian and Russian military police reportedly arrested both NDF and Syrian army soldiers involved in the theft.

The government also made some efforts to crack down on the extortion of protection fees for accompanying shipments of goods, after business groups complained about the practice.

One militia, the Desert Hawks, was disbanded in 2017, after an incident in which members of the group threatened al-Assad’s motorcade as it drove to his family home, apparently unaware who was inside.

These cases make clear that the government has the capacity to control the militias when it chooses, but it clearly does not have the resources or desire to deal with the full scope of abuses and criminal activity attributed to the groups.

Writing for IRIN News, Syria analyst Aron Lund noted that the recent crackdown on militias in Aleppo shows that ‘the Syrian government can impose itself on local groups when it decides to focus its attention somewhere’, but added, ‘without sufficient resources to properly police the country or to demobilize the militia appendages sprouting chaotically from his security apparatus, it is possible al-Assad will have to continue to play a game of whack-a-mole to keep unruly loyalist factions from undermining the state’s authority’.

Whenever the war comes to an end, this challenge will become particularly difficult to manage. As the Aleppo experience has shown, the shabiha will not disappear once their military purpose has ended. Instead, they will likely linger as organized crime groups, further eating away at the state’s legitimacy and slowing the country’s economic and social recovery. 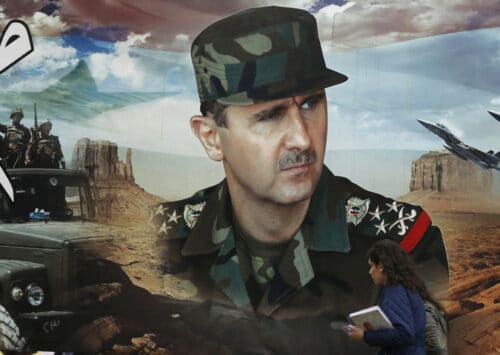 The Syrian Regime’s Information War
As the Syrian uprising descended into an all-out civil war in late 2011, the propaganda started to pick up online. The f...