On 16 December 2016, Russian President Vladimir Putin visited Tokyo, Japan to wrap up a two-day working summit on an economic cooperation agreement and a lingering territorial dispute which was preventing both countries from signing a peace treaty. During the visit, Putin announced that he and Turkish President Recep Tayyip Erdoğan were working on a new round of peace talks between the Syrian government and the opposition, and that these would take place in the Kazakh capital, Astana, on 23 January 2017. He also said that Russia has initiated talks with the Syrian opposition through a Turkish mediator. However, it was not immediately clear who would be at these talks or whether other Western or Arab countries would be included. Additionally, there were no guarantees that the Western-backed Syrian opposition would accept the timing and location of the proposed talks, given the huge losses it had sustained in Eastern Aleppo and the fact that it had been abandoned by its backers, significantly weakening its negotiating power.

On 29 December 2016, Putin announced that a new ceasefire deal had been reached between the Syrian government and the various armed opposition groups, with Russia and Turkey acting as guarantors and Iran as a signatory to a trilateral agreement. There was no mention of any other Western or Arab countries. The ceasefire came into effect at midnight Syrian time (22.00 GMT) on 30 December 2016, yet the ‘terrorist groups’ designated by the United Nations, such as Islamic State (ISIS) and Jabhat Fateh al-Sham (formerly known as al-Qaeda’s al-Nusra Front) were excluded from the deal. Usama Abu Zeyd, the Free Syrian Army’s spokesman, added that the truce also excluded the main Syrian-Kurdish armed group, the Kurdish Popular Protection Units. The US-backed Syrian Democratic Forces, dominated by Kurdish fighters battling ISIS in northeastern Syria, said it did not receive an invitation to attend the ceasefire talks.

A senior member of Jaysh al-Islam, the main rebel group supported by Saudi Arabia and one of the signatories of the truce, told The Guardian newspaper: “What could we do? Our backers [Saudi Arabia] have been nowhere to be seen all year. There’s no one from the Gulf here at all.” There are also reports that Qatar has significantly reduced aid to rebels due to threats it received from senior Russian officials.

Sergei Shoigu, the Russian Defence Minister, said that the rebel groups’ signatory to the agreement would be recognized as the main fighting force of the armed opposition. He added that these formations control the main manpower and weapons. Consequently, the Syrian groups that inked the ceasefire of 29 December 2016 were invited to the talks in Astana.

The talks faced numerous obstacles, as the ceasefire was repeatedly breached by fighting, mainly in Wadi Barada. A large proportion of Damascus’ water supply comes from the rebel-held wadi (valley), and the government had been using tankers to transport water to the city, home to an estimated 4 million people. However, the government claimed that the water had been contaminated with diesel, leaving Damascenes with a minimal water supply. The United Nations Office for the Coordination of Humanitarian Affairs reported that water had been cut off since 22 December 2016, and the UN humanitarian adviser for Syria, Jan Egeland, told The Guardian that his team had been denied access to the north of Damascus, where Wadi Barada lies. This made it difficult for the team to identify the reason for the disruption of the water supply and whether it was due to government bombardment, as the rebels claimed, or rebel sabotage, as the government claimed.

On 2 January 2017, a number of Syrian rebel groups signed a statement alleging ‘big breaches’ of the agreed ceasefire, as the government and its allies continued to attack Wadi Barada on the pretext of targeting the jihadist group Jabhat Fateh al-Sham, which is excluded from the deal. The statement also said: ‘Given the escalating situation and the continuous breaches, the signatory armed groups declare the freezing of all discussions regarding the Astana negotiations.’ A deal was nonetheless reached on 13 January 2017, allowing government workers to begin restoring water to the capital and forbidding attacks on water sources amid clashes.

Following the agreement, rebel factions gathered in Turkey’s capital, Ankara, and after five days of negotiations decided to send a delegation to Astana. Mohammad Alloush, a leading figure in Jaysh al-Islam, said he would head the rebel – military – delegation and told AFP that attempting to “neutralize the criminal role of Iran in the conflict” justified attending the talks.

However, a key rebel group, Ahrar al-Sham, which has thousands of fighters in central and northern Syria, decided not to attend due to ‘the lack of implementation of the ceasefire’, citing the regime’s offensive against ‘our people in Wadi Barada’ among several reasons for staying away.

Syrian President Bashar al-Assad had already confirmed that his government was ready to attend the Astana talks and to “discuss everything”. Consequently, the Syrian delegation was headed by Syria’s UN Ambassador Bashar al-Jaafari, alongside a ten-member government delegation that included military and judiciary figures.

The Trump administration was invited but did not send a delegation, opting instead to be represented by its ambassador to Kazakhstan. Similarly, France and Britain were represented at the ambassador level. Staffan de Mistura, the United Nations Special Envoy for Syria, attended the talks, hailing them as a “good initiative”.

The talks commenced on 23 January 2017 as scheduled, although the rebel delegation backed out of the first session in protest over the repeated breaches of the ceasefire by al-Assad’s government. Opposition spokesman Yahya al-Aridi told al-Jazeera, “If there is seriousness in making these talks lead to something substantial, formality won’t be that important.” In response, al-Jaafari referred numerous times to the rebel delegation as representatives of “terrorist armed groups” and accused them of not keeping their end of the ceasefire deal, mainly in Wadi Barada.

After two days of talks that some media described as ‘rocky’, the three regional powers – Russia, Turkey and Iran – signed a communiqué and announced the creation of a trilateral monitoring body to observe and ensure full compliance with the [December] ceasefire. Under the agreement, the three countries will join forces to minimize violations of the ceasefire, and put pressure on their proxies that breach the deal. However, neither the Syrian government nor the Syrian opposition signed the agreement.

The opposition had several reservations, among which was the credibility of Iran in any ceasefire agreement, given its support for Shiite militias that had fought alongside regime forces against the people of Syria. For its part, the regime acknowledged reaching a temporary ceasefire, yet it insisted on excluding Wadi Barada from the agreement since that area is still occupied by members of Fateh al-Sham.

The meeting’s final statement expressed Russia, Turkey and Iran’s commitment to Syrian territorial unity, paving the way for the Geneva talks in late February 2017, between the political opposition ( Astana was largely attended by rebel factions) and the regime. The statement also stressed the countries’ conviction ‘that there is no military solution to the Syrian conflict and that it can only be solved through a political process. Moreover, Ankara, Moscow and Tehran agreed to join forces to combat ISIS and to work on separating terrorist factions from armed opposition groups. Both sides welcomed the implementation of United Nations Security Council Resolution 2254 of December 2015, which sets out a roadmap for a peace process in Syria. 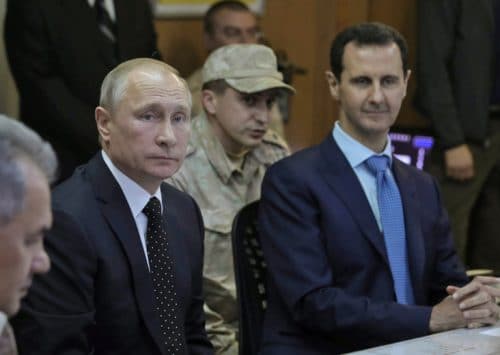