After almost five years of military confrontation between regime forces and the various opposing factions, the war in Syria may be taking a turn in the government’s favour. In early December 2016, the Old City of Aleppo, long a stronghold of the opposition, fell into regime hands after the rebels defending it withdrew.

Pro-government troops also advanced to within one kilometre of Aleppo’s ancient citadel, seizing up to 70 per cent of rebel-held eastern Aleppo. Regime forces built on momentum generated over a second consecutive weekend of heavy bombardment and rapid advances. Furthermore, on 5 December 2016, Russia vetoed a draft United Nations Security Council resolution calling for a ceasefire, paving the way for more regime forces gains.

This is not the first time Russia, a key ally of the al-Assad regime, has shaped the course of the war. In September 2015, President Vladimir Putin announced Russian military intervention in the conflict, following an official request by the Syrian government for assistance. Russian bombers were stationed at the Hmeimim Air Base near the coastal city of Latakia, known for its Alawite-majority population and complete loyalty to the regime. The intervention initially took the form of airstrikes against armed groups opposed to the regime including al-Nusra Front (al-Qaeda affiliated), the Army of Conquest (backed mainly by Saudi Arabia), the Syrian National Coalition (backed by Qatar) and the Islamic State (IS).

A month later, Russian officials were quoted as saying that the goals of the intervention seemed to be broader than helping to fight terrorists; they also included helping the regime to regain the territory it had previously lost to opposition forces. In February 2016, the UK-based Syrian Observatory for Human Rights stated that since the intervention, Russian airstrikes had killed at least 1,700 civilians, among them more than 200 children. The observatory, alongside other rights groups such as the Syrian Network for Human Rights and Human Rights Watch, documented Russian use of incendiary weapons, unguided missiles, cluster bombs and white phosphorus, in addition to the regime’s indiscriminate barrel bombing of civilian areas. According to Syrian activists, by September, Russian airstrikes had killed an estimated 3,800 civilians as well as 2,700 IS fighters and 2,800 rebel fighters.

On 26 February, United Nations Security Council Resolution 2268 was unanimously adopted by the council’s 15 members. The resolution endorsed a US-Russian deal previously brokered by Secretary of State John Kerry and Foreign Minister Sergei Lavrov, which demanded the cessation of hostilities. The ceasefire became effective the next day, but United Nations-designated terrorist organizations remained excluded. The truce appeared to hold despite minor clashes.

In March 2016, the regime backed by Russia and sectarian militias made a bid to recapture the eastern city of Tadmor from IS. By the end of March 2016, the Syrian regime announced it had also retaken the historic city of Palmyra, putting an end to a ten-month occupation during which IS destroyed some of the city’s most iconic monuments such as the Temple of Bel and the Arch of Triumph. The offensive marked the start of a series of defeats for IS that saw it retreat and shrink in size across Syria and Iraq and served as a significant morale boost for al-Assad’s depleted army.

By July 2016, the ceasefire had mostly failed and fighting broke out again between the different factions. However, the main focus of events became the city of Aleppo, where fighting intensified between the rebel forces and jihadi groups on one side and the regime and its allies on the other.

Another major event was the recapture by the Syrian Democratic Forces (SDF) of the city of Manbij from IS in mid-August 2016. The SDF is a multi-ethnic and multi-religious alliance of Kurds, Armenians, Assyrians, Turkman and Circassian militant groups that are armed and backed by the United States. Shortly after, the SDF launched an offensive to capture al-Bab, a Syrian city administratively belonging to the Aleppo Governorate whose inhabitants are mostly Sunni Muslims. The Kurdish plan aimed at eventually connecting all the Kurdish regions in northern Syria.

Given the historical feud between the regime in Ankara and the Kurdish opposition factions, and the Turkish fear of a homogeneous Kurdish entity on its southern borders, the offensive prompted a direct Turkish military intervention a week later. On 24 August 2016, Turkish armed forces launched operation Euphrates Shield, which, according to Turkish President Recep Tayyip Erdogan, was aimed at both IS and the Kurdish ″terror groups that threaten our country in northern Syria″. Although Damascus denounced the move, as it clearly violated Syria’s sovereignty, US Vice President Joe Biden, who was in Ankara on the same day, indirectly endorsed it, saying that the US had made it clear to the Syrian Kurdish forces that they should move back east across the Euphrates or lose US support.

Turkish forces aligned with some Syrian rebel groups captured the city of Jarablus and moved south towards the Kurdish-held city of Manbij. After a few clashes between Turkish forces and the SDF, the Turks seemed more interested in establishing their zone of influence and military presence within Syria’s borders. These clashes eventually died down and Turkish forces moved west to confront IS.

Late in September 2016, the Syrian army and its allies launched their Aleppo offensive in an attempt to seize the remaining rebel-held parts of the city. The main rebel forces in the eastern districts were primarily fighters from Fateh Halab (which consists of mostly Free Syrian Army groups), Jabhat Fateh al-Sham and the more radical Ahrar al-Sham group. More than 40 airstrikes were carried out on 22 September 2016 alone.

By early October 2016, the regime had advanced on several fronts. By taking mainly industrial areas south of Handarat refugee camp, it seized parts of the Ramousah-‘Amiriyah highway previously under rebel control.

In mid-October 2016, a three-day ceasefire was not long enough to evacuate civilians, yet the intervening period has been relatively calm. Rebels sought to use this period to break the siege by shelling government-held areas of western Aleppo. Regime forces fought back, halting rebel gains. In the meantime, Russia sent a large taskforce led by the country’s sole aircraft carrier, Admiral Kuznetsov, towards Syria.

Eventually, advances in the south-east restored the siege of rebel-held districts, isolating 275,000 inhabitants who had been deprived of aid since July 2016.

In what seemed to be the final push to gain control of the city, regime forces and their allies intensified their attacks on 15 November 2016, launching a fierce aerial bombardment and missile strikes from the Russian aircraft carrier stationed off the coast. This was followed by a major ground assault. Backed by Russian warplanes, pro-regime forces advanced rapidly into territory that had been in rebel hands since 2012.

With the focus of the Syrian regime on Aleppo, IS retook Palmyra in a surprise attack on 10 December 2016. The loss of Palmyra a second time – the gains made in Aleppo notwithstanding – will raise questions about the ability of the Syrian military, worn down after years of fighting, to hold territory even with the backing of its Russian allies. 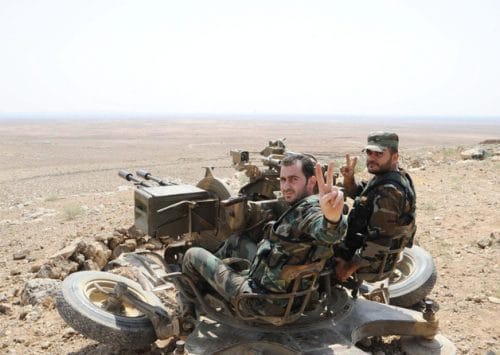 In Syria, al-Assad Gains Upper Hand as US Withdraws Support for Moderate Rebels
Although the final outcome of the Syrian conflict remains to be seen in August 2017, the changing stance of the world po...