As the Syrian uprising descended into an all-out civil war in late 2011, the propaganda started to pick up online. The flood of misinformation, in which all parties participated to various extents, helped distort the most basic components of the conflict.

However, propaganda would not have thrived if journalists had not faced multiple threats. In 2012, reporters were particularly at risk of being kidnapped and killed by jihadists who seized control of the Turkish border. For the most part, journalists were also denied access by the regime, which targeted and killed foreign reporters like Marie Colvin and Rémi Ochlik. The lack of access left the field open for compromised journalists and trolls to fill the gap with propaganda.

Prior to the uprising, the regime had already built a complex communications system targeting various types of audiences who hold different, if not opposite, views. The regime’s strength today hinges on its ability to present itself as both resistant to Western plans for regime change and as a bulwarkt against radical Islam and terrorism.

President Bashar al-Assad has also managed to portray himself as a secular family man with the help of his wife Asma. Her British accent and philanthropic activities – with a focus on women’s and girls’ rights – have helped to soften the regime’s image.

At the same time, al-Assad has cultivated the image of a tough ‘anti-imperialist’ leader in Syria and the Arab world. This has won him broad international support from self-described anti-imperialists.

In the United Kingdom, for instance, resentment at the role that Britain played in the 2003 American-led invasion of Iraq has made many civil society groups deeply averse to regime change, thus opening them up to the Syrian regime’s propaganda. The Stop the War Coalition (StWC) is characteristic of this phenomenon. It counts among its patrons Kamal Majid, a founding member of the Stalin Society, who stated during a meeting of the New Communist Party in 2012 that the al-Assad family had a long history of resisting Western imperialism and therefore should be supported. In August 2014, the coalition sparked an outcry when it published on its website an article that denied a massive crisis in the Yazidi ethnic community by calling it ‘a largely mythical siege’ used to ‘justify a new war in Iraq’. Former supporters of StWC now accuse it of ‘systematically ignoring war crimes committed by the al-Assad regime’.

Above all, many activists have called it out for turning a blind eye to anything other than perceived Western imperialism. In April 2017, during StWC’s general meeting, no mention was made of Russia’s intervention in Syria or of the Syrian regime. The fourth motion asked for a media campaign to ‘make the case that civilian fatalities in Mosul, Iraq due to Western bombing are now reportedly higher than in the bombing of Aleppo by al-Assad’.

In addition to anti-imperialism, another key feature of the regime’s propaganda is its portrayal of itself as the backbone of religious cohabitation and religious minority protection, in particular Christian minorities, in an environment marked by growing Islamist extremism. In France, this rhetoric has been picked up by segments of the Catholic right and far right and echoes the country’s historical colonial role as the protector of Christian minorities in the Levant. In March 2016, a delegation of 30 well-known French figures – including five politicians from the right-wing party Les Républicains and several far-right supporters – met al-Assad in Damascus shortly after the army announced that it had recaptured the city of Palmyra from the Islamic State group.

Regime propaganda would not be nearly as effective without the help of Russian state-controlled media. Syria is only one of the many arenas in which Russia’s President Vladimir Putin is seeking to confront the West. Yet it is key to its diplomatic strategy. Russian media such as Sputnik and Russia Today have diligently spread Moscow’s narrative.

The disinformation campaign against the White Helmets, officially known as the Syria Civil Defence, is a case in point. The humanitarian organization has been praised for pulling victims out from under the rubble of bombed-out buildings. Despite their heroism, the White Helmets have been smeared for aiding al-Qaeda, raising suspicions among politicians and prominent figures about the group’s objectives and the veracity of its footage. According to researchers interviewed by  The Guardian newspaper on the dissemination of online disinformation, there is ‘evidence of a targeted Russian influence campaign against the White Helmets’ with just a handful of ‘experts’ generating a significant number of those counter-narratives. On Twitter, the accounts of the thousands of users targeting the White Helmets resemble each other and ‘include many known pro-Kremlin troll accounts’.

Some prominent cultural figures have adopted a similar virulent discourse against the White Helmets. Pink Floyd co-founder Roger Waters castigated the organization for being fake and working to encourage Western interventionism in Syria.

Propaganda about Syria is not only produced by the regime and its allies. Rebel groups have also waged a propaganda war, although not to the same extent.

When the war started in 2011, various opposition leaders bolstered the narrative that the regime would crumple in a matter of months, which many prominent news outlets relayed. This poor reporting nurtured the belief that the regime was weak.

During the Aleppo siege in 2016, propaganda was also in full swing. Amnesty International consultant Sam Dubberly recounted in an article how the human rights organization carried out its verification work on social media to document potential war crimes when Syrian government forces were advancing into eastern Aleppo on 12 December. He wrote that alongside authentic images, footage and testimonies, two photos and a video were massively disseminated by opposition activists and sympathizers even though they had not been taken in Aleppo. One of the photos was of a woman supposedly murdered in the street following the army’s advance . In fact, the photo was of a murdered American citizen in Afghanistan in December 2015.

In early 2018, the conflict in Afrin, northern Syria, between the Turkish military and Syrian Kurdish fighters, also produced plenty of propaganda. A striking element in this case was that each party accused the other of engaging with the Islamic State.

Syria is emblematic of the information war in the digital era. With the world now turning its attention to the country’s  reconstruction, this clash of narratives is likely to continue on local, regional and international levels. 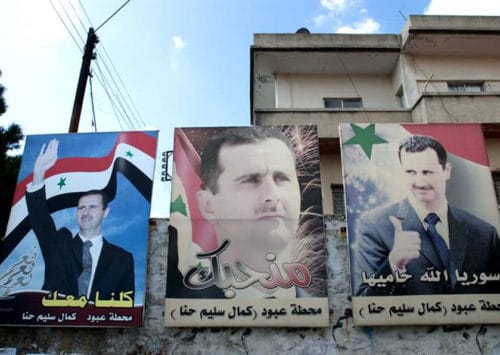 Bashar al-Assad (since 2000)
Bashar al-Assad, reportedly an indecisive personality, has not dominated the regime as his father did, and other members...