The story of Ibrahim Al-Hussein, a disabled Syrian refugee who competed as a swimmer in the Paralympic Games in Rio de Janeiro last year, captured the imagination of audiences around the world.

Al-Hussein lost his right leg in a bomb blast in 2013. He managed to flee to Turkey and then to Greece, where he received asylum and resumed his swimming career, which had been interrupted by the war and by his injury. But many Syrians disabled by war injuries remain without adequate care, both in Syria and abroad.

By some accounts, the number of Syrians who have become disabled as a result of injuries caused by the civil war is in the hundreds of thousands. The National Coalition of Syrian Revolution and Opposition Forces, a group opposed to the regime, reported in 2014 that 270,000 Syrians had been permanently disabled by the conflict. The group Syria Relief, which provides prosthetic limbs inside Syria, estimates that 30,000 people have lost limbs in the war.

A survey conducted by Handicap International in 2014 among internally displaced people within Syria found that nearly half of those interviewed had new injuries related to the war, of which 60% were sustained due to bombing and shelling. The group has also estimated that “tens of thousands” of those injured in the war require orthopedic fitting, prosthetic limbs, and physical therapy.

A separate survey from 2014, conducted by Handicap International and HelpAge International among Syrian refugees in Jordan and Lebanon, found that 30% of them required some sort of specialised physical or mental health care, while one in 20 had a “significant injury” and among those, 80% had been injured as a direct result of the conflict in Syria.

Inside Syria, hospitals and other medical facilities have been destroyed in Aleppo, Idlib, and elsewhere. An estimated 58% of hospitals and 49% of primary care centers in Syria had closed or were partially functional as of January 2016, according to the World Health Organization.

The lines of conflict often make the remaining health facilities difficult to reach and prevent aid organisations from travelling freely to the communities that are the most in need. The World Health Organization notes that “severely restricted access to medical care causes many people’s injuries to turn into lifelong disabilities, which otherwise would have been preventable.” In many cases, patients have had limbs amputated because they were not able to get to a hospital in time.

Some programs within Syria are focused on people who became disabled after war injuries. The World Health Organization and some groups like the National Syrian Project for Prosthetic Limbs provide prosthetic limbs for amputees, for instance. However, because of the same conditions that prevent access to health facilities in general, many patients are unable to benefit from these programs.

Handicap International has found that a “large percentage of those affected by injury lacked adequate care, including access to physical rehabilitation support to avoid the worsening of an injury-related health condition, and to mitigate the possible development of permanent disabilities.”

In the earlier days of the war, many Syrians traveled back and forth to neighbouring countries for medical treatment or, in some cases, were evacuated for emergency care. This has now become more difficult, as Turkey, Lebanon and Jordan have largely closed their borders.

A report by the Lebanese NGO Lebanon Support includes reports of patients who would often cross the border between Syria and Lebanon for care in the early years of the conflict. Since Lebanon effectively closed its borders to Syrian refugees in October 2014, this is no longer an option.

Until recently, war-wounded Syrians from the Dara’a governate, in the south of the country, were evacuated to Jordan for emergency surgical care and transported to a hospital operated by Medecins Sans Frontieres in the town of Ramtha, in northwestern Jordan. However, the Jordanian government closed its border with Syria in June 2016, following a suicide bombing on its frontier with Syria that killed four Jordanian soldiers, a police officer and a civil defense officer.

As of December 2016, MSF reported that at least 70 war-wounded Syrians, 16 of them children, had been denied entry to Jordan for medical treatment, and that some of the patients who were denied access had died.

Following the intensified bombardment of east Aleppo late last year, the first medical evacuations for injured civilians trapped in besieged areas of the city took place on December 15, 2016. Of the 811 people evacuated, about 100 were taken to hospitals in Turkey for specialised care, and the others to facilities in the western rural counties of Aleppo and Idlib.

In many cases, disabilities have prevented people from fleeing the conflict. But for disabled refugees who have managed to get out of Syria, the quality of care varies along with the structure of the healthcare system in each host country. In most cases, healthcare systems in the refugees’ host countries, even in conjunction with aid from the UN and local and international NGOs, have not been able to meet the needs of the disabled refugee population.

Local and international NGOs are providing wheelchairs, prosthetic devices and physical therapy to refugees within host countries – including in Lebanon, Jordan and Turkey – but not all people in need are aware of or able to access these resources.

An assessment of the Syrian refugees’ healthcare situation in Lebanon issued by the American University of Beirut’s Knowledge to Policy Center noted: “Many organizations are involved in providing financial, humanitarian, food and healthcare aid to Syrian refugees; however, there is poor coordination between them resulting in duplication of activities, and inequitable distribution of aid to refugees that is not based on the needs of refugees.”

The report also noted that Lebanon’s privatised and fragmented healthcare system has been less equipped to handle the influx of refugees than the public heathcare systems in Turkey and Jordan. However, the healthcare systems in those countries have also been under strain, leading Jordan to impose new fees on refugee medical care in November 2014.

The treatment of disabled refugees held in camps in Greece was strongly criticized in a recent report by Human Rights Watch. One 85-year-old Syrian woman in a wheelchair, in a refugee camp in Thessaloniki, said she had not taken a shower in a month because she could not access the facilities. 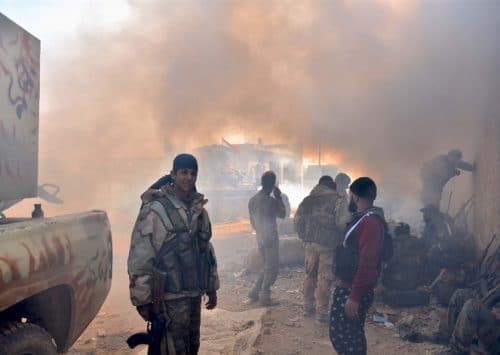 Aleppo, the Worst-Hit City in the Syrian Civil War
Aleppo has witnessed the fiercest battles between rebel groups and the regime forces, hence rendering it one of the most...