Fanack Home / Syria / History of Syria from Past to Present / My Enemy’s Enemy: Syria’s Regime and Kurdish Forces Unite to Fight Turkey

On 9 October 2019, Turkish-backed forces invaded Kurdish-administered northern Syria, intent on taking control of a broad swathe of the border region after the United States (US) withdrew its forces.

It is a change in the incursion’s direction that few could have predicted just days earlier and raises real questions about the future of the ongoing civil war in Syria.

Before the deal was announced, reports spread of negotiations at Russia’s Hmeimim airbase in Latakia. The emergency talks appear to have led to the Syrian regime agreeing to push north, entering territory they have de facto acceded to the country’s Kurds.

Despite this, the government has always maintained its sovereignty over all of Syria, with state media attacking Turkish ‘aggression’ once Turkish-backed forces rolled across the border. Although the SAA have been unable to regain control of this Kurdish territory for several years (bar a tiny garrison in Qamishli), the recent deal adds credence to regime claims of full sovereignty of the country.

Mazloum Abdi, the SDF’s top commander, made clear that the Kurdish authorities could stomach a deal that chipped away at Kurdish autonomy but saved Kurdish lives. In his words, it amounted to a choice between “compromises and the genocide of his people”.

Yet questions still linger over what compromises the Kurdish authorities have made for this assistance. They likely involve some form of government rule, assurances against US forces re-entering the area and perhaps even some military commitment to help recapture the remaining pockets of Syria still under rebel or Turkish control.

All these possibilities would entail a reversal of the situation before the Turkish incursion and represent a loss of US influence and control over the future direction of the war in Syria and the administration of the Kurdish region. They would likely also cement Kurdish mistrust of American intentions and foment anti-American sentiment within Iraq and Syria’s Kurdish community, which has been a key American ally in recent decades but feels it has been abandoned by Washington several times in recent years.

Only time will tell if the local population will put up with renewed government control, which presumably would include conscription of young men – one of the key reasons for migration out of regime-controlled areas).

That said, the government has in the past periodically relaxed conscription requirements for communities whose collective loyalty was in the balance. This may be how al-Assad will look to begin solidifying actual control in Kurdish areas.

Ruled by a local network of councils that have been lauded internationally for their apparent embrace of democracy and gender equality, Kurdish-administered Syria (known as Rojava by Kurds) has been one of the few relatively stable areas of Syria since the ouster of the Islamic State (IS).

While there have been some reports of Kurds welcoming al-Assad’s troops, their reception seems to have been mostly muted. But with evidence of the killing of Kurdish civilians by Turkish-backed groups, more than 160,000 people already internally displaced and fears of ethnic cleansing if Ankara’s plan to re-settle up to 2 million Syrian refugees currently on its territory goes ahead, it is easy to see why the Kurds would be keen to avoid falling under the thumb of Turkish-backed forces.

Fighting in a media vacuum

In its immediate aftermath, the SAA’s push north has had dire consequences for media coverage of the conflict. Since the 2011 revolution, the Syrian regime has had a hostile relationship with the world’s media.

Given journalists’ interest in covering both the protests that sparked the 2011 revolution and the rebel groups that subsequently emerged, international media incurred al-Assad’s wrath when they covered the human rights abuses committed by the regime. Journalists visiting rebel-held territory were blacklisted, accused of entering the country illegally and barred from working in government-held areas in the future.

One of the first effects of the SAA’s push north was the exodus of foreign journalists back into Iraq, many fearful of potential arrest or the border being blocked by government troops. This will have obvious effects on coverage of the fighting and, as is often the case, in a vacuum of international awareness and accountability, war crimes and human rights abuses are all too common.

This has led to some bizarre events. Chief among them was the US ceding one of its own bases to Russian forces – one of the first times this has happened since the Second World War (it also occurred after the US withdrawal from Vietnam).

The US and Russia have committed substantial military and political resources to back their preferred proxies in the war in Syria, furthering their own regional interests but also competing against each other.

Although Russian and US forces have both clashed and cooperated during the war, they have largely kept to their own proxies’ fiefdoms. With the SAA’s push north, that appears to have ended. Furthermore, it appears that the Pentagon was actually assisting Russian forces to take up those positions.

Secondly, as US forces pulled out of their bases in northern Syria, following President Donald Trump’s abrupt and seemingly spur-of-the-moment decision, they passed Syrian troops on one of the area’s motorways.

Syrian troops were apparently moving into the area to take up their newly agreed positions. For two countries that have sealed their mutual animosity in burning vitriol and cruise missiles, the sight of the two sides rolling past each other on a motorway may just be Syria’s new normal.

Can Turkey be stopped?

Despite US sanctions, Trump’s rhetorical bluster and allies’ ire, Turkey has faced little push-back. Indeed, with the incursion a political winner back home, President Recep Tayyip Erdogan seems unlikely to stop in his mission to establish a border zone free of Kurdish militants, unless he runs into significant military opposition.

The SAA is unlikely to be much of a threat, but the Russians might, and Moscow’s troops have already been patrolling the frontline between the Turkish and Syrian/Kurdish troops. Ironically, these troops have taken over the job the US soldiers were deployed to do, namely keeping the peace between the two armies.

In a matter of days, the US’ role and position in the war in Syria has been thrown into disarray, a relatively stable area of the country has turned into a battlefield, IS, which was all but eliminated, may be rallying, and Moscow and Damascus seem to be in a stronger position than they have for years.

In the eight-year war in Syria, a new chapter has just begun. 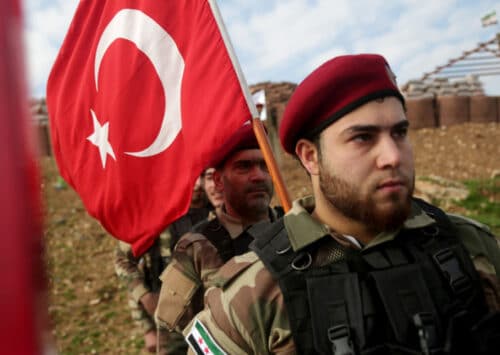 Aaref WATAD ©AFP
Aaref WATAD ©AFP
"Ignorance leads to fear, fear leads to hatred, and hatred leads to violence.
This is the equation."
IBN RUSHD/AVERROES (1126 – 1198)
We are a Dutch not for profit organisation (NGO), financed solely by individuals who share our belief in the importance of publishing and disseminating reliable, unbiased information on the Middle East & North Africa region. To represent the voice of the region’s people, we carefully echo the region’s heartbeat by offering fact-checked and therefore credible information.
Your support is greatly appreciated and helpful!
Donate