Fanack Home / Syria / History of Syria from Past to Present / Turkey’s Presence in Northern Syria: A Caring Brother Acting in its Own Self-interest

Turkey’s Presence in Northern Syria: A Caring Brother Acting in its Own Self-interest

Where does the rebuilding of daily life end and the ‘turkification’ of Syrian society begin? That seems to be the central question when assessing what the Turkish state is doing in the areas of northern Syria under its control. To make that more concrete with an example: nobody can object to the re-opening of a hospital in the town of Jarablus, but what are the portraits of Turkish President Recep Tayyip Erdogan doing on the walls?

It is not only the Turkish military and its armed affiliates that have become dominant in several areas of northern Syria, Turkish companies and the Turkish state have also established a strong presence. This was kicked off by the Turkish army’s first cross-border operation in the summer of 2016, when the border town of Jarablus was captured from Islamic State (IS). Turkey has since expanded its influence westwards. Its last conquest early in 2018 was Afrin in the northwestern corner of Syria, which has been occupied by Turkey and its proxies ever since.

Turkey has so far remained on the western side of the Euphrates river. The eastern side is ruled by the Kurdish YPG and its political arm the PYD, supported by the United States (US) in its ongoing efforts to neutralize IS. Recently, however, Erdogan has stepped up his rhetoric, announcing an operation east of the river “within days”. Due to the US presence east of the Euphrates, a large-scale operation is not possible, as journalist Amberin Zaman explains. However, smaller cross-border actions are likely, maybe in towns where the US army is not present like Tal-Abyad and Ras al-Ayn. This makes the question of whether Turkey is ‘turkifying’ the border regions and if so, to what extent, even more pressing.

Turkish construction companies have started to rebuild destroyed houses and other buildings, mobile internet providers have set up antennas to provide their services and teachers from Turkey have taken jobs in Syrian schools. In some towns, clocks have even been set to Turkish time, the residents now living an hour behind their fellow Syrians.

Turkey has not been secretive about its activities in the areas under its control. It has taken groups of international journalists across the border to show off its efforts to rebuild destroyed houses and neighbourhoods, to re-open schools and hospitals and to start services with Turkish brands, like internet and post offices. One report, by France24, showed a school in Syria that has been dedicated to the victims of the failed coup attempt in Turkey in July 2016. Turkish newspapers, especially those with English-language websites, are also contributing to the picture that Erdogan wants to paint of Turkey’s presence on Syrian soil: that of a caring older brother, tirelessly and altruistically helping people get back on their feet.

While few would argue against the importance of children being able to go back to school, of hospitals functioning and of the police being trained, the question arises of how altruistic Turkey really is. What is its interest in the region?

This interest is first and foremost military. There is another military power in Syria, and it is no coincidence that this is Turkey’s archenemy: the PYD and its military wing the YPG and YPJ (women’s units). They share an ideology and a leader with the PKK, the armed Kurdish movement that has been at war with the Turkish state since 1984. Turkey finds the presence of ‘Öcalan fighters’ along its border unacceptable. It also claims the presence of IS in the border region was problematic, although this is doubtful. When Turkey first crossed the Syrian border in the summer of 2016, IS was already weakening. A weakened IS, Turkey knew, could no longer control the further expansion of the PYD and the YPG/J. Turkey thus took over that task.

This was just a tactical move. By also investing in the region administratively and commercially, Turkey is serving a longer term strategic goal: to enhance the country’s influence in the region and in Syria specifically, as a force working against Syrian President Bashar al-Assad, whom Turkey has wanted to see removed from power since the beginning of the uprisings in 2011. This expansionist desire is inspired by the vast territories controlled by what was then the Ottoman Empire, the grandeur of which Erdogan is keen to revive. Commercial and cultural dependency on Turkey helps to further that goal.

Last but not least, Turkey hopes that by helping life return to normal in at least some parts of the war-torn country, some of the more than 3 million Syrian refugees can be convinced to return home. A town like Jarablus, which has working schools, hospitals, internet and electricity, does indeed have appeal, if the official numbers are correct: the population has grown from 5,000 residents under IS to at least 140,000 today, a number that includes both returnees from Turkey and internally displaced Syrians.

Meanwhile, a lot remains unclear about the extent of Turkey’s efforts to recreate parts of north Syria in its own image.

Education offers an interesting example. Turkey has supplied school books and teachers who speak Arabic. The fact that children now also learn Turkish instead of French, as used to be the case in all Syrian schools, could also be considered logical, as this article by France24 makes clear. Isn’t it more useful to know the language of the current influential northern neighbour than that of the former colonizer? Yet this begs other questions. What about local languages in the curriculum, like Aramaic and Kurdish? And how much influence did the Turkish state have on the content of the school books it supplied? In other words, what are children under Turkish rule in Syria learning?

Turkey’s actions show an interesting contradiction in its Syria policies. After all, ever since the beginning of the Syrian war and especially since the Kurds started building their autonomous regions in the north of Syria, Turkey has warned against the disintegration of its southern neighbour. Syrian unity was to be respected at all times. Turkey’s fear of self-rule for the Kurds in a post-war Syria, which could further embolden the Kurdish movement at home, runs deep, since it undermines the strength of the state. Apparently, ‘turkifying’ parts of Syria is not considered to be a nail in Syria’s coffin. 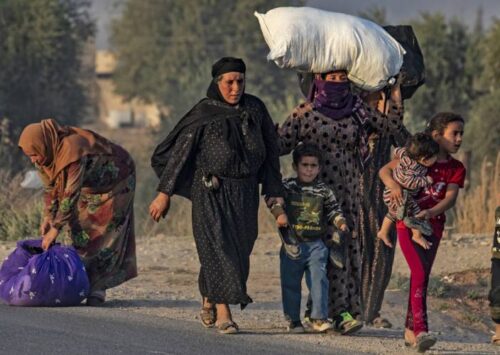 Islamic State Strikes as Turkey Attacks North-east Syria
It is not so much that Trump is fulfilling his election vow to pull US troops from Syria that is concerning. It is the w...