In November 2015, the International Syrian Support Groupi (ISSG), met in Vienna to discuss ways to end the Syrian conflict. ISSG members unanimously expressed urgency to end the suffering of the Syrian people, the destruction of Syria, and the subsequent increase in terrorists drawn to the fighting in the country. The group also stressed the need to implement a nationwide ceasefire in Syria soon after official representatives of both the Syrian Government and opposition begin serious steps toward a political transition under UN auspices and based on the 2012 Geneva Communique.

In parallel with the ISSG meeting, the five permanent members of the United Nations Security Council pledged to back a UN-endorsed ceasefire-monitoring mission in parts of Syria where monitors would not come under threat of attack from terrorist groups such as the Islamic State (IS) and al-Nusra Front.

Almost three months later, the United States and Russia, as members of the ISSG, agreed to enforce the ceasefire throughout Syria, effective 27 February 2016. Unlike in a previously aborted ceasefire, Russia and the United States have arranged to act as direct guarantors and monitors of the cessation of hostilities in Syria. Should the ceasefire last long enough, it could pave the way for reconciliation between the Syrian government and moderate rebel forces and hopefully set the stage for a peaceful transition to end the five years of violent unrest in Syria.

The ceasefire raised hope for a respite in Syria, because it would alleviate the people’s suffering across the war-torn nation. Immediately after the ceasefire came into effect, the United Nations and its partners stepped up deliveries of food, water, and medicine and were planning to help approximately 1.7 million people in “hard-to-reach” areas by the end of March. The United Nations also delayed by two days the next round of peace talks, initially scheduled for 7 March, to give some time for the truce in the country to take hold, UN Syria envoy Staffan de Mistura told Reuters.

Aid groups aimed to use the lull in the fighting, which has claimed an estimated 270,000 lives and displaced half the population, to deliver desperately needed supplies. The Syrian Arab Red Crescent said aid workers began the first deliveries of humanitarian aid to Syrians two days after the truce came into effect, with ten aid trucks entering the besieged rebel-held town of Muaddamiyat al-Sham, southwest of Damascus. Before the ceasefire, only two aid deliveries had been made to the city in February.

Eyewitnesses in Damascus claimed that they saw less shelling during the ceasefire, and, in parts of Aleppo, Syria’s second-largest city, children walked to their first day of school of the week without fear of rocket attacks, an Agence France Presse correspondent said.

On 14 March, Russian President Vladimir Putin ordered the withdrawal of the “main part” of the Russian forces from Syria after five and a half months of military operations, a move that was welcomed internationally as a prelude to diplomatic efforts to advance the peace talks in Geneva and hopefully to end the five-year war in Syria.

Despite rising expectations that the ceasefire would put violence on hold and reduce the tragic situation of the Syrian people, indications are that the ceasefire might collapse soon. Reports said that there has not been a complete cessation of airstrikes in areas covered by the agreement, and the warring parties blamed one another for breaching the ceasefire.

The Syrian ceasefire excluded jihadist armed groups such as IS, al-Nusra, and Ahrar al-Sham. Neither the Syrian regime nor Russia, despite its partial military pullout, ceased their attacks across Syria on groups labelled as “terrorists,” and the United States continued its attacks. These “terrorist” groups remain active in large swaths of Syrian territory, particularly in the east and southwest, which means that these areas will continue to be dangerous conflict zones.

The independent Syrian Network for Human Rights claimed to have documented 14 separate violations by Russia and the regime on the first day of the truce, causing the deaths of 15 people, and that two of the attacks were incidents of barrel bombing in northwestern Syria. Similarly, residents of the town of Darat Izza in Aleppo’s countryside were far from optimistic about the ceasefire, given the civilian deaths in “increasing” Russian and Syrian aerial bombardment, said Clarissa Ward, CNN’s senior international correspondent. Many people in rebel-controlled territory opposed the ceasefire because they see the cessation of hostilities as “a trick designed by the regime to take more territory,” Ward noted.

For its part, the Syrian regime denied breaching the ceasefire, blaming rebel forces instead. Syrian President Bashar al-Assad, speaking to the German broadcaster ARD, said “We will do our part so that the whole thing works,” claiming that the Syrian army “has refrained from retaliating attacks in order to give a chance for the agreement to survive.” Al-Assad accused “terrorists” of violating the deal from the beginning.

Regional and International Concerns about the Ceasefire

Regional and international parties expressed concerns that violations of the already fragile ceasefire might lead to a collapse. French Foreign Minister Jean-Marc Ayrault, speaking on the sidelines of the UN Human Rights Council on 29 February, called for an urgent meeting for the UN-backed task force overseeing “a fragile Syria ceasefire to evaluate a range of breaches…in areas controlled by the moderate opposition.” He also reiterated that all perpetrators of violations in Syria must be held accountable and referred to the International Criminal Court in the Hague.

NATO Secretary General Jens Stoltenberg, addressing a press conference in Kuwait City, said cautiously, “We have seen encouraging signs that the ceasefire is largely holding, but at the same time we have seen reports about violations.” He stressed that “all sides [of the conflict] should respect the agreement” but also noted that NATO was concerned about Russia’s military buildup and five-month bombing campaign in support of al-Assad.

Israeli Prime Minister Benjamin Netanyahu carefully welcomed the ceasefire, saying that Israel would not accept Iranian “aggression” or the supply of advanced weapons to the pro-Iran Hizbullah militia. Netanyahu stressed that any agreement “must include an end to Iranian aggression aimed at Israel from Syria’s territory.”

Russian Foreign Minister Sergei Lavrov refuted these concerns about the success of the ceasefire, saying “We’re moving in the right direction…and the cessation of hostilities is settling.”

The chances are small that the ceasefire will be a breakthrough in the overall Syrian political transition, given the strong resistance from local opposition groups and regional powers, including Saudi Arabia and other Gulf states, observers said. However, the ceasefire agreement will probably enhance the Syrian people’s access to humanitarian aid across the country, as both the regime and the opposition have agreed to lift the devastating sieges imposed on towns in Syria so as to prepare for the delivery of aid.

In March, new peace negotiations started in Geneva, but they were expected to produce little movement. UN Special Envoy Staffan de Mistura said that “the mother of all issues” was political transition in Damascus, but neither side—government or opposition—was yet ready to compromise on the future of President Assad. 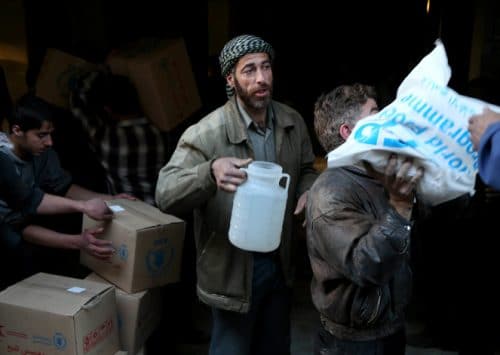 UN Accused of Pro-regime Bias in Relief Effort in Syria
The investigative report which involved interviewing dozens of UN staff (current and former employees), concluded that B...