Since the protests began in January 2011, there has been a severe clamp down on press freedom. Authorities have banned foreign and independent journalists from entering the country. 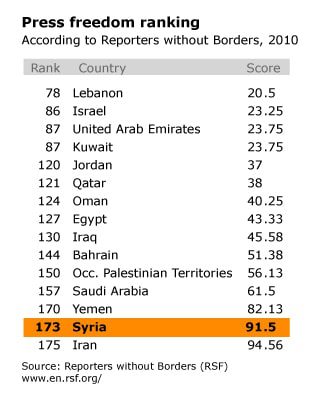 In July 2010, the New York-based independent Committee to Protect Journalists (CPJ) addressed a letter to President Bashar al-Assad on the occasion of the 10th anniversary of his presidency, recalling his acknowledgement, in 2007, that the Press Law needed to be improved. The CPJ urged the President to ‘ensure that long-stalled amendments to the restrictive Press Law are enacted’. In its letter, the CPJ also recalled that, at the time of writing, three journalists were still in jail, two of whom facing a military court, and the third, having served a 30-month sentence, awaiting a new trial on new charges. A fourth journalist was arrested while trying to cross the Lebanese border. By August 2010, his fate was still unknown.

In its Press Freedom Index 2009, the Paris-based media watchdog Reporters sans Frontières (RSF) ranked Syria 165th out of 175 in the world, between Somalia and Vietnam. RSF also lists Syria as an adversary of the Internet. Over 200 websites are blocked and censors are watchful. See further Freedom House; International Freedom of Expression Exchange or the International Press Institute.

The Arab Human Development Reports, published by UNDP, mention Syria’s infringements in covert terms like constitutional failings and legal restrictions. Yet bloggers, publishers, journalists and, other (new) media users seem to know ways around state censorship. Artists are on Facebook – and/or have their own websites – and most performing artists can be seen and heard on YouTube. Websites have Follow us buttons on Twitter, Facebook or YouTube. At times, mild criticism seems possible, particularly in the economic field. For instance, in May 2010, the (print and online) magazine Syria Today published an extensive dossier on poverty in Syria, revealing that the situation is much worse than official data suggest. This issue of Syria Today was on sale on the streets of Damascus. The fact that it is in English and has the support of the international (business) community probably makes a difference.

As long as one does not criticize the Baath Party, the government, or of course the President and his family, there are ways to manoeuvre around the censors. On the other hand, both the Syrian Center for Media and Freedom of Expression, and the local office of al-Mashriq satellite channel (based in Dubai) were closed in 2009 by Syrian intelligence services. The repression seems arbitrary, as some journalists are banned while others can continue reporting; local factors seem to play a role (Attacks on the Press, CPJ).