Consumers of the new media are still limited in number, with only 22.5 percent of the population using the Internet (5,069,480 users in 2012; percentage in the whole of the Middle East: 40.2, Internet World Statistics). The number of broadband Internet subscribers is tiny: 0.06 percent of the population (Worldbank). Those who do surf on the Internet, do this mostly either in the workplace, or in Internet cafés, which are strictly controlled and where it is compulsory to show an ID, making anonymity impossible. Access to the Internet is regularly cut off. Over 200 websites are blocked by the censors (see Reporters sans Frontières). Syria has banned websites of political opponents and arrested people for accessing them. Also, sites like YouTube, Arabic Wikipedia and Facebook are blocked from time to time.

Still, in interviews, President Bashar al-Assad insists he has the firm intention to expand the use of new media such as the Internet and the mobile phone (one of the two Syrian providers, MTN, is owned by the president’s cousin). In 2009, 44 percent of Syrians had a mobile phone (International Telecommunications Union,Worldbank). In 1999, there were a mere 4,000 mobile phones in the whole country. The number of Internet users has also shown a sharp increase over the years (from just 30,000 in the year 2000 to 5,069,418 in 2012 (Internet World Statistics)). 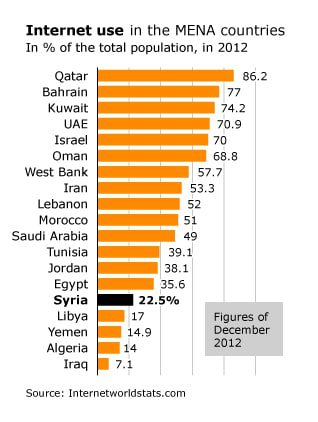