Clans and Communities in Syria 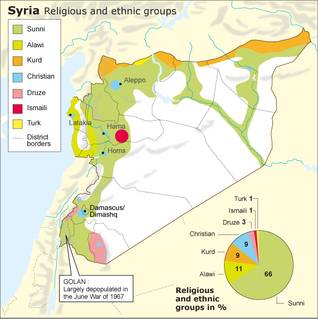 Syria is not a tribal society, except for the semi-nomadic Bedouins, most of whom live in the Syrian deserts. Syria is – at least formally – a state in which ethnic or religious backgrounds are not supposed to play a role. It is a secular state; the President insists secularity should be maintained, even strengthened – hence the ban on wearing a veil for university students, introduced in July 2010.

Yet there are some notable divisions, both along ethnic and religious lines. First, there is the distinction between Arabs – the vast majority – and non-Arab minorities. Syria’s official name is the Syrian Arab Republic and its legislation stresses its adherence to the Arab culture and language. The Kurds, Armenians, and descendants of Syriacs or Arameans resent this. Their languages are neglected, to say the least, and their cultures ignored, sometimes even repressed.

There are also divisions between religious groups, particularly since the Alawites – who form only 10 percent of the population and who, in the past, belonged to the poor agricultural class – began to dominate power in the 1960s and 1970s (see Ethnic and religious composition and Relations between groups). It is not so much religion as such that divides the people, but rather sociological factors (power, wealth) in relation to specific groups.

One of Syria’s problems is the old community system, inherited from the mandatory power. In the early years after independence, each religious or ethnic community was represented in Parliament by a certain number of seats. Each community also had its institutions, and its own sets of laws concerning questions of personal status (marriage, divorce, inheritance et cetera). The military, who took power in 1949, systematically put an end to this community system – reducing at the same time the number of institutions. The Christians still have their own laws, but all Muslims, whatever their background, share the same sets of (family) laws.