School dropout rates are relatively high, as is child labour. 0.5 percent of boys and 0.3 percent of girls in 2011 were out-of-school at the primary level. Figures for the secondary level are much higher: 9.1 percent of boys and 12.2 percent of girls dropped out from secondary school. According to the ILO report National Study on Worst Forms of Child Labour in Syria, the school drop-out rate is linked to several factors: poverty (children who instead work to financially support their families), poor quality of education, poor school accessibility or the tendency of not sending girls to school. The exact occurrence of child labour in Syria is difficult to define, as data from several sources contradict each other (moreover, recent data is not available). The above mentioned 2012 ILO report cites several sources: a 2002 UNICEF report on child labour states that 12.8 percent of children between 12-14 years old and 3.1 percent of 10-11 year olds work. The UNICEF Multiple Indicator Cluster Survey (MICS) of 1999 reveals that (only) 3 percent of 10-14 year olds work. Finally, according to UNICEF Childinfo statistics, 4 percent of Syrian children aged 5-14 are engaged in labour (based on the MICS of 2006).

Most sources agree that the highest incidence of male child labour occurs in urban areas (especially between the ages of 10-14), while female child labour mainly occurs in rural areas. Child labour increases in governorates with high population growth rates and high school drop-out rates, in addition to agricultural governorates in the north-eastern area. According to nearly all studies, the majority of working children are either school drop-outs or have never enrolled in school. 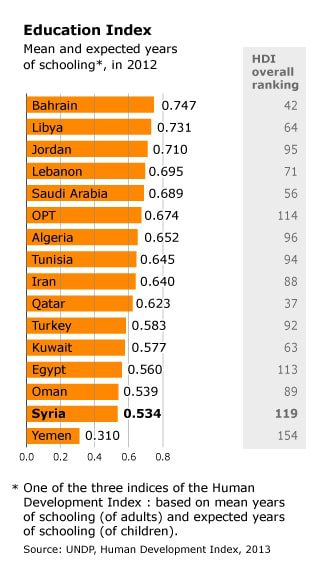 There are four state universities, in Damascus, Aleppo, Latakia, and Homs. For a few years now, private schools and universities have been authorized, and several have been founded recently. A study among university students by the Norwegian research institute FAFO shows how fast the level of education has risen in Syria. Almost one out of five students has parents who never advanced further than primary school, while one-third stopped at the lowest level of secondary school.