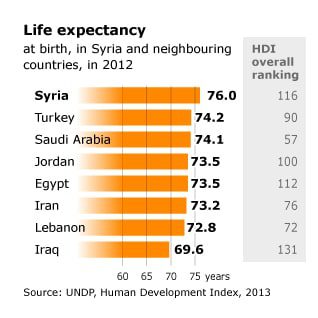 In 2012, Syria’s Human Development Index (UNDP) was 0.648. Over the past thirty years, it rose by 0.77 percent annually from 0.603 in 1980. Still, Syria’s HDI is lower than might be expected from an oil-producing country, especially given Syria’s GDP. In this respect, Syria ranks 116 out of 187, below Egypt and just above Morocco, Iraq and Yemen.

Syria scores much better where human poverty indicators are concerned (such as the Human Poverty Index, the probability of not reaching the age of 40, or the adult illiteracy rate). Its score is significantly lower, however, on the gender-related development index (GDI). Its GDI value is 96.4 percent of its HDI value. Out of the 155 countries with both HDI and GDI values, 145 countries score better ratios than Syria (see Women).