There are notable – regional and other – imbalances in Syria in regard to the distribution of age, work, wealth and – inversely – poverty. According to the United Nations Development Programme (UNDP, Poverty in Syria, data for 2003-2004), almost two million inhabitants (11.4 percent of the population) cannot meet their basic food and non-food needs. Using a broader definition of poverty, 30.1 percent of the population (5.3 million individuals) may be considered poor.

Poverty is generally more prevalent in rural than in urban areas (62 percent in rural areas), but the greatest differences are geographic. 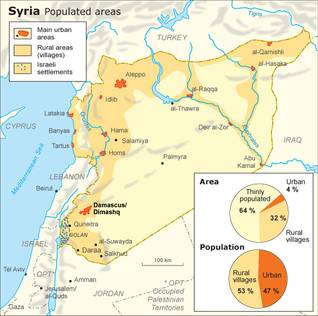 The north-east (Idlib, Aleppo, al-Raqqa, Deir al-Zor and al-Hassaka), in both rural and urban regions, has the greatest incidence, depth and severity of poverty, while the southern urban region has the least. Poverty decreased between 1996 and 2004 for Syria as a whole, but again, regional patterns varied. The incidence of poverty declined rapidly in the central and southern regions, but it actually rose in the rural parts of the north-east.

At the national level, the non-poor benefited proportionally more than the poor from economic growth. Inequality rose. In 2003-2004, the bottom 20 percent of the population consumed 7 percent of all expenditure in Syria, and the top 20 percent consumed 45 percent. Again, the same regional variations were significant. However, rural-urban variations were equally noticeable: inequality in urban areas increased significantly, but it did not change in rural areas.

Most poor people in Syria live only just below the poverty line. Education is strongly correlated to poverty. More than 18 percent of the poor population is illiterate, and these are most severely affected by poverty. Poverty also interacts with gender. There is a disturbingly low rate of school enrolment among poor girls. Girls in poor households in rural areas are most likely to be illiterate.

Agriculture and construction workers are overrepresented within poor groups, as are the self-employed. Moreover, the poor are more likely to work in the informal sector, which employs 48 percent of the poor. Widows as heads of household, with children, are often poor, and thus can be a targeted vulnerable group (Poverty in Syria, UNDP).

Olga Kolos ©Shutterstock
©Fanack
"Ignorance leads to fear, fear leads to hatred, and hatred leads to violence.
This is the equation."
IBN RUSHD/AVERROES (1126 – 1198)
We are a Dutch not for profit organisation (NGO), financed solely by individuals who share our belief in the importance of publishing and disseminating reliable, unbiased information on the Middle East & North Africa region. To represent the voice of the region’s people, we carefully echo the region’s heartbeat by offering fact-checked and therefore credible information.
Your support is greatly appreciated and helpful!
Donate