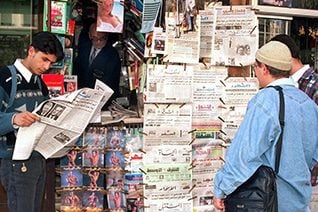 In the large cities, there are some newsstands, but it is more common for newspapers to be sold by street vendors and grocers, in small quantities. Foreign newspapers are hard to find, even in Damascus, and are banned as soon as they run articles on ‘sensitive’ subjects. No newspaper’s circulation exceeds 50,000, their distribution being, for logistical reasons, mainly limited to the big cities. The circulation of local newspapers ranges from a few thousand to about 10,000.

Al-Baath (Renaissance; circulation 40,000) was founded in 1946; it is published in Damascus and is the Arab Socialist Baath Party’s newspaper. Al-Thawra (Revolution; circulation 40,000) was founded in 1963. It is in Arabic and is published in Damascus by the Wahda (Alwehda) group, which also publishes the newspapers al-Jamahir  (The People), al-Wahda (The Unity), al-Uruba (The Arabic Idea), al-Furat (The Euphrates), and al-Fida (The Redemption), and the sports weekly al-Mawqif al-Riyadi (Sport Stance; circulation 50,000). Tishrin (October; circulation 50,000) is a political daily founded in 1974 (after the October War).

Al-Watan (The Fatherland), published by the Syrian Arab Publishing and Distribution Company, was Syria’s first independent newspaper. Baladna (Our Country) and Baladna English were launched in December, 2009 and are published by United Group, which also publishes the Syrian version of the Yellow Pages and Tourist Yellow Pages, What’s On and Top Gear, among many other titles. Qasiyun (Kassioun; The Tough Ones) is the Syrian Communist Party’s daily newspaper.

Sana is a government-run news agency; it is in Arabic, English, French, Spanish and Turkish.

Forward mainly offers business news and is in English. Since 2007, it is published monthly by Haykal Media, which also publishes the Arabic-language bi-weekly business magazine al-Iqtisadi (The Economist), and runs a number of (news) sites, such as Syrian History and the directory Every Syrian Site. Haykal Media is part of the powerful Haykal Group (transport, logistics, ITC). Syria Today contains business and cultural news in English, and is slightly critical. It is published monthly (print and online). The online version has links to several news sources, including the BBC and Reuters.

Syria News is an Arabic news site, as is Syrian News Station (SNS). JPnews (Jouhina Portal News) is a news site which is both in Arabic and English. Aram Group offers cultural and societal news in Arabic. Creative Syria.com has cultural news and a current affairs blog, with further links to Syrian and foreign news sites.