Fanack Home / Tunisia / Past to Present / Manich Msamah, the Tunisian Movement That Will Not Forgive

Manich Msamah, the Tunisian Movement That Will Not Forgive

It all started on 14 July 2015, when Tunisian President Beji Caid Essebsi presented the so-called Administrative Reconciliation Act, legislation that would effectively grant amnesty to pre-revolutionary business elites and officials accused of corruption under dictator Zine el-Abidine Ben Ali, who was toppled in January 2011.

The act’s objective, as stated in its preamble, was ‘to liberate the entrepreneurial spirit in the administration, promote the national economy and enhance confidence in the state institutions’. However, the proposal was met with anger and outrage by opposition politicians and the public. In this context, Manich Msamah was born.

The activist movement, whose name translates as ‘I will not forgive’, describes itself as youth-based, socially aware and leaderless. The name itself clearly indicates the movement’s political position: it will not forgive those who have benefited for decades from a corrupt system and it refuses reconciliation without accountability.

Barely 300 people took to the streets in September 2015 to express their rejection of the proposed act, which they considered as a ‘threat to the gains of the revolution’. The demonstrators were violently dispersed, which only served to strengthen the movement both in the streets and on social media. It subsequently launched a campaign called ‘Wanted’, in which it published the names of corrupt businessmen along with an estimate of the illegal profits they have made over the years.

The movement’s perseverance attracted public support, and as a result, the proposed act was amended in July 2016. The second draft excluded businessmen from the amnesty and limited it to officials. The president argued that these officials were largely coerced into committing infractions and should thus not be held accountable for their actions.

To Manich Msamah, this made no sense. “Those who support this act want us to believe that the corrupt officials did not personally benefit from their acts, which could not be further from the truth,” said Khaoula Sliti, one of the early members of the movement. She argued that the act would not only destroy the concept of accountability but would also be an insult to all of the honourable men and women who had said no to corruption during the years of dictatorship and who, in many cases, lost their jobs, were subject to harassment or were labelled as non-cooperative by the regime. This resulted in these individuals being denied promotions and other benefits throughout their careers.

The movement and its political allies fiercely opposed this second version as well, leading to further amendments. Although the final legislation offered a much reduced version of the original bill, Manich Msamah considered the changes to be merely aesthetic; the essence of the act itself was counter-revolutionary and should never pass. Pass it did, however, in a final vote in parliament on 13 September 2017, although the session quickly descended into chaos as politicians from the various parties traded insults.

Manich Msamah responded to the vote by organizing multiple protests in major Tunisian cities. The largest, in the capital Tunis on 17 September 2017, attracted thousands of demonstrators who regarded the act as a major setback to the country’s new and fragile democracy. The act was also condemned by the International Center for Transitional Justice, which called it ‘a promotion of impunity’ and a ‘betrayal of all Tunisians who stood up during the revolution for dignity and democracy’.

In their own attempt to fight back, 38 opposition politicians, mainly from the Popular Front and Democratic Current, presented an appeal to Tunisia’s temporary Constitutional Commission, stating that the act, which is one of amnesty rather than reconciliation, runs counter to the country’s 2014 constitution and the United Nations Convention against Corruption. However, the commission’s inability to reach a decision by the nominated deadline meant the act was referred back to the president, its principal architect. As expected, he signed it into law.

This was not the end of the struggle for Manich Msamah, however. The movement shared  leaked documents detailing the commission’s internal deliberations that show that the act is indeed unconstitutional. The movement claims that overlooking the commission’s opinion was deliberate and constitutes one of many procedural failures that took place in the course of the law’s adoption.

Although the law was passed, the movement, which has succeeded in writing a new chapter in civic engagement and government opposition in the country, has vowed not to give up anytime soon. “At the end of the day, they will never kill this dream that we all in Manich Msamah share; a dream of a just, democratic and free Tunisia,” said a hopeful Khaoula Sliti. “We are the youth, the generation who fought for this revolution and who we will never stop fighting these ghosts of our nation’s past. Everything I have to say about the corrupt system is perfectly articulated by [the Palestinian poet] Mahmoud Darwish: You are merely ‘those who pass between fleeting words’, while we ‘have the past, the present and the future’.” 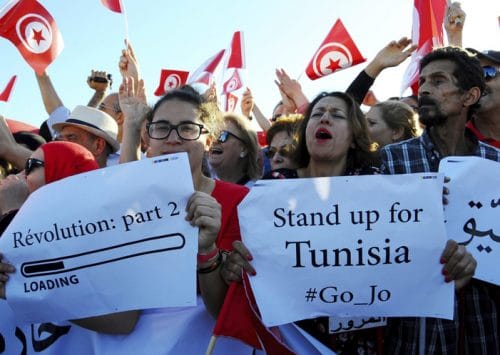