Fanack Home / Tunisia / Past to Present / Social Unrest in Tunisia: When the Expected Becomes Unexpected

Social Unrest in Tunisia: When the Expected Becomes Unexpected

On 1 January 2018, Tunisia’s new Financial Act took effect. This meant a 1 per cent tax increase on all products, higher service and consumption taxes as long as several other policies aimed at ‘reducing the budget deficit’. Thus, on New Year’s Day, Tunisians woke up to a general hike in the prices of commodities, including everything from fruits and vegetables to gasoline, phone cards and perfumes.

The law, which was passed on 9 December 2017, had been heavily criticized throughout its adoption process, with several members of parliament describing it as ‘catastrophic’, ‘lacking any clear economic vision’ and the government’s attempt at an ‘easy solution’. The Afek Tounes party, part of the ruling coalition, asked its ministers to resign from the government, and announced ‘it had now joined the opposition’, stating that ‘this financial law does not reflect a will for economic reform’.

Even though economic growth increased to an estimated 2.2 per cent in 2017, up from 1.1 per cent in 2015 and 2016, the country’s economy is still floundering. The unemployment rate hovers around 16 per cent while inflation is 4.5 per cent. Another indicator of a deteriorating economy is the value of the dinar, which dropped from 1.9 dinars to the euro in March 2011 to a record low of 2.95 dinars to the euro in December 2017.

Moreover, the government has struggled to implement the reforms linked to its $2.9 billion loan from the International Monetary Fund (IMF). These mainly consist of reducing public sector salaries, which at 15 per cent of GDP are among the highest in the world, improving tax collection and cracking down on tax evasion.

In this context, Prime Minister Youssef Chahed launched ‘a war on corruption’ in May 2017 that saw the arrest of several businessmen including former presidential candidate Yassine Chennoufi. However, more needed to be done to reduce spending and foster growth, hence the 2018 Financial Act.

The government was unprepared for what came next. What started as a few complaints online, evolved into a wave of protests in cities including the capital Tunis, Mahdia, Siliana and Kasserine. In Thala, which made headlines during the 2011 revolution, protesters set the security forces’ headquarters on fire, forcing them to withdraw. The army has since been deployed in Thala, Bizerte, Sousse and Kebili.

On 8 January 2018, the protests claimed their first (and so far only) victim in Tebourba: 43 year-old Khomsi Ben Sadek Eliferni. According to a statement released by the Interior Ministry, the cause of death was asphyxiation by tear gas. However, a video and several pictures surfaced online of the victim being run over by a police car, fuelling more violence and protests in the city. The prime minister announced that he would visit Tebourba to try and defuse the situation. However, his visit was cut short with no official explanation, and he only made it to Batan, eight kilometres short of Tebourba – proof, said local residents, that the central government does not care about them.

But the government does care. Over 800 people have been arrested, according to United Nations figures, although the Fech Nestannew movement puts this number at more than 1,000. The movement, whose name translates as ‘What are we waiting for?’, was the true catalyst behind many of the protests, mobilizing its activists both on the ground and through its Facebook page. It accuses the authorities of ‘an indiscriminate crackdown’ and ‘a return to Ben Ali’s [the former Tunisian dictator] oppressive techniques’.

This concern for freedom of expression and peaceful assembly has also been raised by Rupert Colville, the spokesperson for the United Nations High Commissioner for Human Rights, who issued a press briefing note calling on the authorities ‘to ensure that people are not arrested in an arbitrary manner’ and ‘urging all sides to work together towards resolving, with full respect for human rights, the economic and social problems underpinning the unrest’.

Furthermore, several journalists have reported being interrogated by the police while covering the protests, including Mathieu Galtier from the French newspaper Libération and Michel Picard from French International Radio (RFI). Reporters Without Borders condemned the interrogations, with its North Africa Director Yasmine Kacha saying that they have “no place in a democracy”.

Tunisian politicians reacted differently to the protests. Predictably, the prime minister defended the Financial Act, stating that the decision to introduce it had been “difficult but necessary to improve the economic situation”.

At the same time, he blamed the Popular Front opposition party for the ensuing violence. Ennahdha, another of the parties in the ruling coalition that supported the act, made the same accusations, declaring that leftist anarchic political parties had taken advantage of citizens’ demands ‘to incite chaos, acts of vandalism, sabotage and looting’. In response, Hamma Hammami, leader of the Popular Front, said that by accusing them, the government is “trying to escape its responsibilities and is attempting to mislead the public”.

President Beji Caid Essebsi took a different approach and chose to spend 14 January, Revolution Day, in Ettadhamen, an impoverished suburb of Tunis. Ettadhamen has been the scene of various clashes with the police since the start of the protests. Speaking at the newly restored cultural centre, which has been closed since the revolution in 2011, the president said that he understands the youth’s frustration and that the economic situation is getting better “slowly but steadily”. The prime minister shares his optimism, announcing that “2018 would be the last tough year for the Tunisian economy”.

In the midst of the turmoil, one question has been asked repeatedly: Why is a law that has been criticized and rejected by many politicians and incited nationwide protests still in place? One possible answer is pressure from the IMF. Since the revolution, the Tunisian government has taken out various loans to cover expenses, pushing up its public debt from 41 per cent of GDP in 2010 to a staggering 71 per cent in 2018. This has led observers such as Jihen Chandoul, co-founder of the Tunisian Economic Observatory, to accuse the IMF of “imposing these reforms and causing this unrest”.

In an online statement, the IMF responded by saying that ‘the fragile economic condition of Tunisia is a result of … its model of state patronage’, adding that ‘the IMF does not advocate austerity … (but) advocates well-designed, well-implemented, socially-balanced reforms’.

Whether it is the design or the implementation of the reforms, Tunisians are clearly dissatisfied. To some extent, the recent protests are in line with most acts of protest in the country.

Historically, January has been the month of social unrest: from the infamous bread riots in January 1984, to the revolution in January 2011 and the protests over high unemployment in January 2016. Although all of them were violently suppressed, most resulted in major regime change, whether it be ousters, resignations, or in one case, exile. What it will be this time around only time will tell. 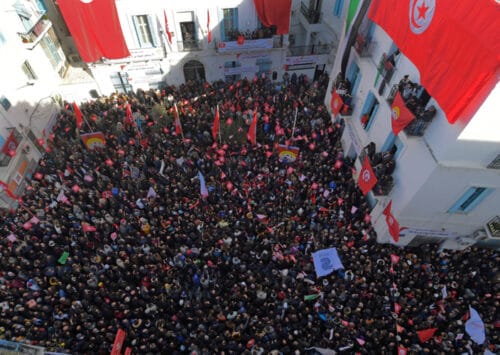