In early January 2016, Tunisia marked five years since its successful revolution, and, by the end of the month, the country was on the verge of a second revolution. The situation has since calmed down, but the root causes have not faded away and the country is still at risk.

Revolutions sometimes seem romantic, using slogans such as “power of the people” and “call for freedom,” but popular uprisings are often more about everyday needs, chiefly economic ones. So, when the Tunisian people took to the streets, rallying against their long-time dictator, they were indeed calling for freedom, but they were hoping, above all, to see improved economic conditions, including better job opportunities.

Most of those demonstrating were younger citizens, many of them university students or graduates. They were fed up with an economy unable to respond to their expectations. Before 2010, similar young people spent all their money to board tiny makeshift vessels in order to cross to Europe. If they did not end up as fish food, they faced the risk of arrest and deportation and then arrest back home. Once free, they repeated their flight again and again.

The Arab Spring, which began in Tunisia in December 2010, gave Tunisia’s youth the chance to express their feelings. They overthrew a dictator and part of a regime symbolized by a strong police apparatus and an older generation of elites, but the youth were unable to provide an alternative, and the old order was unwilling simply to fade into the background. The state restructured itself, the former ruling elite returned to the front of the stage, and the police resumed their repressive methods.

So, over the years, while democratic elections were organized and leaders were peacefully replaced, the youth were increasingly disengaged from the political process. The initial surge in patriotic nostalgia and will to participate in public life faded gradually. Young people abstained in large numbers from the 2011 constitutional election and in even larger numbers from the 2014 legislative and presidential elections. The success of the Arab Spring did not benefit its heroes.

These young people, who felt excluded from public life and unattached to the nation state that they had long equated with a corrupt and brutal regime, kept trying to join Europe. Others, following a long tradition of going east to participate in the region’s seemingly never-ending wars, traveled by the thousands to Syria and Iraq to join extremist groups fighting to establish an Islamic state on the ruins of the Middle Eastern postcolonial nation states.

But most of them, hundreds of thousands, stayed in Tunisia. Those living in the marginalized areas of the northwest and the south have been in constant upheaval over the past five years. Complaining about the lack of development and direct investment, they felt that they had been abandoned, forgotten, and disregarded, calling their treatment hogra (hajra, oppression). Most expect the state to provide jobs, and that is the motivation behind most of their demonstrations. Their movements were co-opted by political parties that tried continually to transform their economic frustrations into political demands.

Sidi Bouzid in 2011, Siliana in 2012, Gafsa in 2013, Gabes in 2014 —these are only the tip of the iceberg. Warning signs were ever present. Apart from limited, short-term attempts in 2011 and 2012, no government was able to provide concrete solutions for the angry masses. Tunisians were promised things by politicians eager to be elected, they had high expectations, and they heard stories about the success of the Tunisian Revolution, but they saw no improvement in the quality of their lives.

The year 2015, even if it marked the official inauguration of democracy in Tunisia and the end of the political transition, was also the time of Tunisia’s harshest economic crisis. The country’s economy is linked to that of the European Union and Libya, and, as the crisis in Europe worsened and as Libya was collapsing and its oil production decreased, Tunisia suffocated. Terrorism killed Tunisia’s tourism industry, which accounts for about 15 per cent of the country’s GDP. Moreover, due to insecurity and regional instability, local and foreign investors preferred to look elsewhere, mainly Morocco and the United Arab Emirates.

Youth anger, high expectations, weak leadership, and economic crisis were the ingredients of a recipe for a second revolution. When winter came, many warned that the situation was explosive. Winter is the season of social unrest in Tunisia, as cold weather affects the households of poor people and fuels their resentment. So, when Ridha Yahyaoui, a young demonstrator in the city of Kasserine (in northwestern Tunisia), died during the riots—in an accident, not a police attack—the revolt spread.

Yahyaoui’s death, on 16 January, marked the beginning of protests that engulfed much of Tunisia, reaching even the capital city.

Some political parties tried to exploit the situation, but their success was limited; demonstrators felt that politicians had betrayed them, and they refused to include political slogans in their protests. Extremist groups such as Islamic State attempted to take over the movement, but they were largely ignored. UGTT, the all-powerful trade union, took a neutral position, which allowed them to negotiate with the public and private sectors.

The government announced several urgent measures to calm the protestors, and the police resorted less to coercive measures and more to dialogue and negotiations. Clearly, the state was listening to its people. This was the greatest achievement of the Arab Spring: people speaking and asking for their rights and officials responding. The movement ceased, and life returned to normal in most Tunisian cities, apart from a few sporadic events.

But how long will this calm last? What will happen after the next political assassination or terrorist attack? Where is Tunisia heading if the economic crisis is not halted? These questions are put on hold, like the country’s situation, more than five years after the Arab Spring. 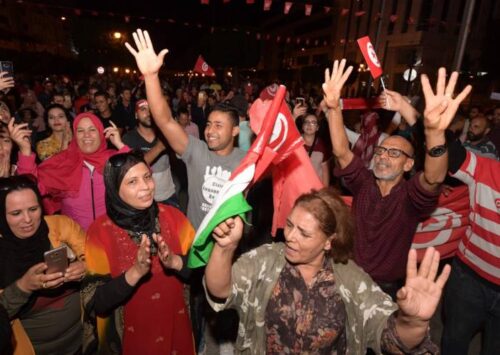