The Tunisian culture is a synthesis of especially Arab and Berber elements, which come to expression in, among others, its jewellery, ceramics, tapestry, and music. Tunisia cherishes and promotes its heritage in its museums and various cultural institutions and initiatives.

centuries. The Romans, Phoenicians, Arabs, and French have all left distinct traces, contributing to Tunisia’s rich and multi-layered culture.

Various ethnic and ideological groups, such as traditional Muslims, secularists, Jews, and Christians, live side by side in Tunisia, in a complex cultural landscape. Whilst the vast majority of Tunisians are Sunni Muslims, they do not constitute a homogeneous community but can be classified broadly into three groups: Salafists, moderate Islamists, and the general Muslim population.

Tunisian souks are famous and a favourite tourist destination. Tunisian women who dress traditionally wear characteristic long, colourful dresses, often decorated with embroidery. Most Tunisians speak Arabic and, influenced by the culture of the protectorate, French.

For many years, the International Sahara Festival has taken place in Douz, at the end of December. The festival lasts for several days and attracts thousands of people from the Sahara region, as well as national and international tourists who want to celebrate Saharan culture. Traditional arts and crafts, games, singing and dancing, and camel races are performed at the festival, combining historical and modern cultural elements.

Tunisians enjoy a variety of famous cultural events throughout the country. Every year, music, arts, and cinema festivals in Tunis-Carthage bring together thousands of people. Regular expositions by art students and concerts by music students are also popular, taking place mostly in Tunis, usually hosted by universities. Tunisia’s traditional music, malouf, today mixes with contemporary music, resulting in a variety of music styles that can be heard at Tunisia’s many concerts. Modern jazz festivals take place regularly. Tabarka, for example, hosts an annual jazz festival. In addition, the Centre for Mediterranean Music in Sidi Bou Said presents a vast variety of other musical events.

Most Tunisian literature, which dates back to the 7th century, is written in Arabic. Ali Douagi is one of the most famous Tunisian writers; he published in Arabic during the French protectorate, a period when a great deal of French literature also arrived in Tunisia. Ali Douagi is widely considered the founder of the Tunisian short-story genre. Other famous Arabic writers are Walid Soliman, Habib Selmi, and Bchir Khraief. The latter is famous for having reinvented the novel by including dialect in his stories. Tunisian francophone literature has also become famous. The award-winning poems and novels of Abdelwahab Meddeb, for example, have inspired people from around the world.

Tunisia is famous for its handicrafts, including carpets, ceramics, pottery, leatherwork, and mosaics. Kairouan is the centre of crafts manufacture, employing about 23,000 people, most of whom are women. The manufacture of carpets began in Tunisia in the 19th century, and Tunisia now produces several types of carpet famous throughout the world: the mergoum, a short-pile woolen carpet with Berber regma (woven motifs for decoration) on it; the kilim, which is strongly influenced by the Ottoman Turk experience; and ‘tapestries’, which are woven in many colours and are especially famous. Tunisia’s pottery and ceramics are among its oldest handicrafts, dating back over a thousand years. There are two main types of pottery, one made by women – which is generally utilitarian and is most common in Tunisia’s rural areas – and a kind of turned pottery made by men. Leatherwork includes embroidery, saddlery, and utilitarian items such as the traditional leather slippers that are still widely available. Wrought iron is often used for decoration purposes, including for doors, windows, and grillework. It is inspired by the Arab, Spanish, and Portuguese craft.

Tunisia’s mosaics are among the oldest and most important in the world. Roman mosaics are the most common, but others are much older. The Bardo Museum in Tunis exhibits a wide variety of mostly Roman mosaics; the exhibits are open to the public.

The 2011 revolution launched another wave of artistic expression, which deals with the years of dictatorship and touches once again on issues such as Tunisia’s national identity. Grafitti and posters are amongst the most frequent expressions of contemporary arts. An art exhibition in June 2012 in La Marsa, a suburb of Tunis, reflected differing – and sometimes opposing – dynamics in contemporary Tunisian society, with people searching for the country’s identity, which appears rent between modernity and Muslim religion. Some artists who exhibited there protested with their work the increasing influence of Islam in society following Tunisia’s revolution. This led religiously conservative Muslims to storm the arts exhibition, which they considered blasphemous; several pieces of art were destroyed.

Probably the most famous aspect of Tunisian architecture is its characteristic white houses, often decorated with blue window frames and large, artistic gates and doors. There is much variation in Tunisian architecture, which has been influenced by various cultures over the centuries. Early Roman and Punic remains can, for example, be seen in Tunisia’s north and along its coastlines. Much later, the Arabs brought minarets and mosques to Tunisia, and some old religious sites can still be visited today. In Tunisia’s south, ancient Berber architecture, including the famous troglodyte pit houses, is still visible. During the French protectorate, French architecture and infrastructure came to Tunisia.

There are many different types of Tunisian music and dance, reflecting the country’s rich cultural heritage. Tunisia’s most famous music is maluf, which is played by a small band of violins, flutes, drums, and sitars. While it has its origin in Andalusia, the maluf that is played in Tunisia now has some Berber elements and resembles traditional Turkish and North African music. Traditional Tunisian dance is similar to that of Egypt, except that it is faster and has some different stylistic elements.

Perhaps the most famous museum in Tunisia is the Bardo Museum in Tunis, which is located in a former palace of a bey. It was founded in 1882 and presents a world-famous collection of mosaics, mostly Roman. The National Museum of Tunis-Carthage is another important archaeological museum, which was founded in 1875. Visitors can see the remains of the ancient city of Carthage as it was during Punic and Roman times. Many famous archaeological pieces can be seen, including human sculptures and limestone and marble carvings. The museum also presents jewellery, household utensils, and weapons.

Tunisia’s most important Roman archaeological site is Dougga, a UNESCO World Heritage Site. It is located in northern Tunisia, on a hill in the middle of the countryside, and contains the best-preserved remains of a Roman city in North Africa.

Handball is also important in Tunisia, and the national team has played several times in the world championships. It has won the African Cup eight times. Tunisia has participated in the Olympic Games since 1960. The 2012 Olympic Games in London saw six medals go to Tunisian athletes. One gold medal went to swimmer Oussama Mellouli, in the 10-kilometre marathon. He also won a bronze medal in the men’s 1500-metre freestyle, making him one of Tunisia’s most successful and famous athletes. 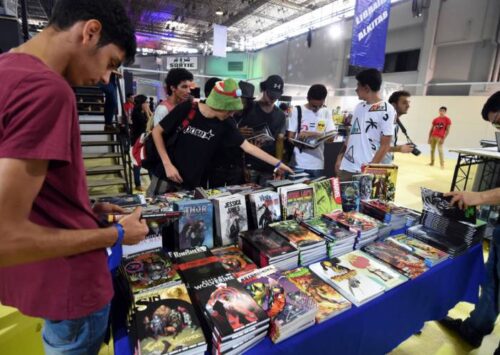 Empty Words? Tunisian Writers Face Hard Times Amid Economic Slump
Clearly, there is no shortage of compelling stories to inspire Tunisian writers. Whether they can inspire Tunisian readers to open their wallets is less certain.

Theatre and film
The Tunisian film industry and cinema is one of the most liberal and famous in the Arab world. Many companies have filmed in Tunisia, most famously for the Star Wars series, some parts of which were filmed in the Tunisian Sahara. ...