Fanack Home / Turkey / Past to Present / In Turkey, Attack on Democracy Continues with Removal of Kurdish Mayors

The mayors of Diyarbakir, Van and Mardin were elected with more than 50 per cent of the vote in local elections on 31 March 2019. Yet on 19 August, Turkey’s ruling Justice and Development Party (AKP) announced it had removed them from office and appointed local governors in their place.

Several government officials, including Interior Minister Suleyman Soylu, stated that the mayors needed to be replaced because they were misusing their positions to support terrorism, referring to the mayors’ alleged ties to the armed Kurdistan Workers’ Party (PKK).

According to officials, these ties include attending the funerals of PKK fighters and naming streets after guerrillas who lost their lives. Kurdish mayors do openly attend such funerals, as fighters are often buried in their hometowns and are mourned by the communities that voted the mayors into office.

The mayors were not given the opportunity to contest their dismissal in court, which would likely have been fruitless anyway since the courts have lost their independence during almost two decades of AKP rule.

Before the elections, the electoral board found no objections to the candidates and approved their candidacy.

Although the dismissals may have come as a shock to the cities’ residents, replacing elected officials, especially in Turkey’s Kurdish-majority south-east, is not new. After the attempted coup in July 2016, hundreds of Kurdish mayors were removed and several were subsequently arrested.

Some of those arrested are still in jail, like Gultan Kisanak, the previously elected mayor of Diyarbakir who was dismissed in October 2016. Her successor, Cumali Atilla, ran as the AKP candidate in March this year but secured only 31 per cent of the votes, while Selcuk Mizrakli, the now-replaced Peoples’ Democratic Party (HDP) candidate, won 63 per cent.

The other two ousted mayors, Ahmet Turk in Mardin and Bedia Ozgokce Ertan in Van, won 56 per cent and 54 per cent of the votes respectively.

These latest dismissals follow the AKP’s earlier attempts to get the election board to overrule the March results. In several cases, the attempts were successful, and the runners-up – always the AKP candidates in the Kurdish regions since the party has support among more religious Kurds – were appointed instead.

In some instances, the attempts were unsuccessful, as in the case of Ahmet Turk, whom the AKP tried to disqualify because of his age (78). Turk, a highly respected veteran of the Kurdish political movement, was installed as Mardin’s mayor but has now been fired, indicating that the state will use whatever means it can to get rid of mayors it does not approve of.

As soon as the replacements were announced, protests broke out in the three cities. The security forces tried to disperse the crowds with water cannons and tear gas. Hundreds of people were arrested on the first morning of the protests, a number that has increased significantly in the days since.

About the replacement of the Kurdish mayors, Imamoglu tweeted: ‘It is impossible to associate the removal of Diyarbakir, Van and Mardin mayors with democratic practices. The three mayors who are replaced by state-appointed trustees were elected by popular vote in the March 31 local elections. Ignoring the will of the people is unacceptable.’

Dismissed mayor Mizrakli told the independent news outlet Ozguruz, “This struggle will continue until the mechanisms that generate such seizures of rights is changed in its entirety.” The Union of Kurdistan Communities, an umbrella organization of Kurdish groups in several countries, also reacted and called for ‘‘total resistance’’ by the people.

The international community was similarly quick to denounce the AKP’s efforts to change the outcome of the elections. Human Rights Watch wrote on its website that the removal of democratically elected mayors ‘blatantly violates the rights of voters and suspends local democracy’.

Anders Knape, president of the Congress of Local and Regional Authorities of the Council of Europe, published a statement in which he expressed his ‘grave concern’ about the decision of the Turkish authorities to suspend the elected mayors. He called on the Turkish authorities not to undo the removals but ‘to restore the capacity of municipal councils to choose a replacement mayor’.

His statement suggested that the replacements were a legal rather than a political decision. Interior Minister Soylu was keen to stress this point despite the fact that the ‘trustee’ of Van was quick to send the municipal council home. At the time of writing, this had not happened in Mardin and Diyarbakir.

The HDP expressed concern that the replacements will encourage the greed and mismanagement displayed by previous ‘trustees’. In a strongly worded press interview, HDP co-chair Pervin Buldan said, “Those who were found to be involved in misleading acts like theft, plunder, corruption, bid rigging and other disgraceful acts are once again being sent by the AKP government to replace the mayors who have been elected by our people.” 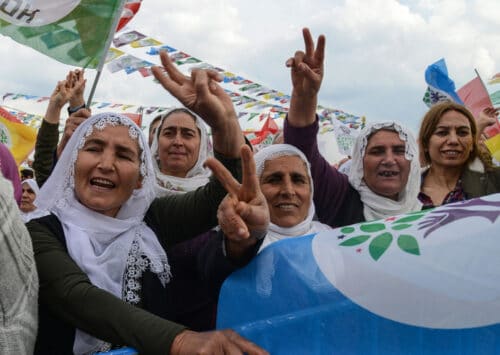 Turkey’s Ruling AKP Manipulates Election Outcomes in Kurdish South-east, Leaves Municipalities Broke
The big question in the Kurdish-majority municipalities in the south-east of Turkey was whether the candidates for the l...