Fanack Home / Turkey / Past to Present / In Turkey, Calling Early Elections Could Be President Erdogan’s Master Stroke / Turkey’s Elections: The Winners and Losers

Turkey’s Elections: The Winners and Losers

On 24 June 2018, Turkey’s President Recep Tayyip Erdogan announced that he had been re-elected for another five-year term.

Inflation of 12 per cent and a 20 per cent drop in the lira’s value this year failed to turn the electorate against the president, who has been behind much of the country’s economic prosperity over the past 15 years.

Furthermore, the 110,000 civil servants dismissed nationwide and the tens of thousands of Turks detained did little to dent his success at the ballot box. The unofficial results from the state-run Anadolu Agency showed clear winners and losers in the elections.

Erdogan ended the night with just over 52 per cent of the vote, winning the elections outright and re-moving the need for a second-round vote. His Justice and Development Party (AKP) took home 42 per cent of the vote, assuring a parliamentary majority thanks to an alliance with the right-wing Nationalist Movement Party (MHP). Even so, this was 7 per cent fewer votes than the AKP won in November 2015, deepening its reliance on partners. It is unclear yet what pound of flesh the MHP will demand for its loyalty to Erdogan.

With 11 per cent of the vote, the MHP far outdid expectations, particularly as the party’s leader, 70-year-old Devlet Bahceli, did little in the way of campaigning – even if he received more air time from state broadcasters than opposition candidates. He stood by the AKP, having forged an electoral alliance before the vote, and this appears to have served him well. Many expected that the AKP voters who had become disenchanted with Erdogan’s growing authoritarianism would vote for an opposition candidate. Instead, publicly released figures indicate they voted for Erdogan’s electoral ally. This protest vote was calculated not to affect the balance of power, which now, as before the elections, rests with Erdogan’s Islamist AKP.

CHP presidential candidate Muharrem Ince was the obvious loser. He ended the election campaign as the de facto leader of the most united opposition movement (or loose coalition) in decades. With rallies reportedly drawing millions of supporters, it was clear that he had rejuvenated the political left and given hope to the voters who remain strongly opposed to Erdogan’s agenda and personality politics.

Moreover, Ince’s ‘popular’ touch – speaking at rallies in a far more relatable way than CHP frontrunners before him – and his ease with his family’s religiosity, sparked hopes that he could attract more socially conservative voters.

Even so, he failed to rally sufficient support. His hopes of ousting Erdogan rested on other opposition parties lending their votes to him in a second round, the only viable means of defeating the long-time leader.

However, having entered the race as the clear underdog, Ince’s performance should not be viewed simply as a defeat. Erdogan still commands an intensely loyal and impressively large base, for whom he apparently can do little wrong. The fact that Ince was able to inspire hope in his party after 15 years of nominal electoral opposition is a victory. With a social media campaign that far outdid the AKP’s efforts, Ince has set the stage for a new era of opposition politics in Turkey. Some think he may even challenge the CHP’s leadership.

Meral Aksener’s Iyi Party, a new political movement born out of disillusionment with the MHP and AKP, promised to steal votes from the president’s base. However, election night was a disappointment, with little evidence of a swing to ‘the she-wolf’.

In contrast, the pro-Kurdish Peoples’ Democratic Party (HDP) fought its way back into parliament, crossing the 10 per cent threshold required for representation, and in doing so denying the AKP an outright majority. With their leader campaigning from jail, and amid fears that a new electoral law could be used to discriminate against Kurdish voters, gaining 11 per cent of the vote was a real victory for the HDP and Turkish democracy.

After the widespread claims of fraud in last year’s constitutional referendum, there was speculation about whether these elections would be free and fair. On election day, claims of abuses in Kurdish areas began to spread, with reported cases of armed security personnel entering polling stations and videos posted online of ballot box stuffing.

Observers from the Organization for Security and Cooperation in Europe (OSCE) said that opposition parties were denied equal campaigning conditions and that the AKP enjoyed an undue advantage from excessive media coverage and restrictions on the free press. Additionally, observers said the ongoing state of emergency and rights restrictions impacted the vote’s result. Such an unbalanced field adds further credit to the performance of the opposition parties.

Turkey does not have exit polls, and domestic and international media were dependent on the state-run Anadolu Agency for the results. As the initial votes predictably came from pro-AKP areas, the first results showed heavy swings towards Erdogan rand his party. This led to criticisms of pro-government media trying to paint a picture of an inevitable AKP victory as well as erroneously favouring the AKP in their reporting of the results, giving hours of hope to CHP supporters that the final tally would swing back in their favour. This longed-for result never materialized.

Criticism was also levelled at Erdogan’s early claim of victory, which he made well before any official results had come in. In most countries, this would be seen as presumptuous or even foolish. In Turkey’s current political climate, where accusations of treachery are widespread and often have dramatic consequences, Erdogan’s claim set the scene for anyone opposing the result to be declared a traitor. Although the opposition conceded the elections, the CHP initially said that the party’s own polls at the ballot box cast doubt on the Anadolu Agency’s figures.

Ince’s concession speech called on Erdogan to act as a president for all and not just for his own party. Ince even called Erdogan to congratulate him on his win. While this played up to his own campaign message, it missed the point of Erdogan’s politics. For years, Erdogan has been consolidating not only his own power but also that of the AKP. His desire to remain the leader of the AKP while president (he changed the constitution to ensure this) speaks to his steadfast desire to see the AKP’s Islamist agenda become Turkey’s established norm.

Erdogan’s win means more than just another five years of his authoritarian rule. The elections gifted him with a raft of new powers – voted for in last year’s referendum – including the right to directly appoint public officials, impose a state of emergency and intervene unilaterally in the judicial system.

With such a concentration of power in the hands of a man with a track record of quashing dissent and forcing his own agenda on his people, Turkey may only have seen the first chapter of its transformation. 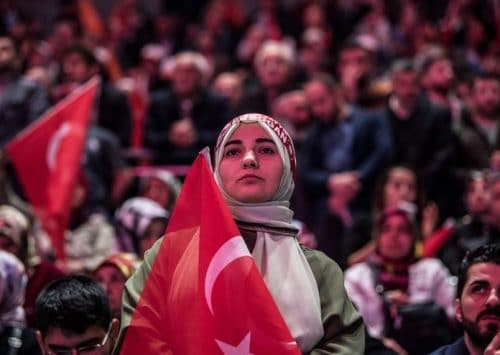 In Turkey, Calling Early Elections Could Be President Erdogan’s Master Stroke
With the economy showing worrying signs, some observers have viewed the early elections as a sign of weakness, and the g...