Fanack Home / Turkey / Past to Present / Iran and Turkey: Partners of the Moment

Centuries ago, the Ottoman and Safavid empires were archrivals, nemeses that battled each other for dominance of the Middle East. In 2018, much has changed, and Turkey and Iran appear to be enjoying the warmest relations since Iran’s Islamic Revolution nearly four decades ago.

The two countries now share trade ties, both legal and illicit, military cooperation and political objectives, a situation that even a few years ago would have seemed impossible between NATO member Turkey and the hardline Islamic Republic of Iran.

However, it has only been in the last couple of years that the countries’ closeness has been made public. Since 2012, executives at Turkey’s state-owned Halkbank have conspired to allow Iran to evade American sanctions by spending its oil and gas revenues on gold and food. The recent trial of one executive, Mehmet Hakan Atilla, in which Reza Zarrab, an Iranian-Turkish co-conspirator, testified against him, revealing Turkish President Recep Tayyip Erdogan’s support for the scheme, was extremely embarrassing for Ankara. Erdogan was outraged that a New York prosecutor was allowed to air Turkey’s dirty laundry in public, and he frequently attacked the United States (US) rhetorically in the run-up to the trial. This antagonism between the US and Turkey explains to some degree the improvement in Turkish-Iranian ties. Ankara’s pursuit of a geopolitical path more independent of the US and Europe has freed Turkey to engage more closely with pseudo-pariah states like Iran, even to the extent of such illicit dealings.

Mutual interests have also driven the warming of relations. In August 2017, General Mohammad Bagheri, Iran’s military chief of staff, made an official visit to Ankara, where he met with Erdogan and the Turkish defence minister. The visit, the first by such a senior Iranian official since 1979, was apparently fruitful, with public promises of enhanced training and counter-intelligence cooperation. Erdogan is also slated to visit Iran. Bagheri’s visit was initially organized to discuss the war in Syria, and it is this seven-year conflict that has largely been the catalyst for the Turkish-Iranian rapprochement.

Although Turkey and Iran have supported opposing sides in Syria, with Tehran staunchly backing the regime of Bashar al-Assad and Turkey backing the predominantly Sunni rebels, in recent years their interests have begun to align. Since Russian support for the regime has made al-Assad’s ouster increasingly unlikely, Ankara has agreed to engage with Tehran and Moscow to bring the conflict to an end and ensure Turkey’s interests are best served in the interim. The Astana talks have facilitated this dialogue. A rival negotiation to the UN-brokered Geneva peace talks, the Astana talks have been seen in the West largely as a Russian ploy to steer regional decision making back towards Moscow, although Turkey has engaged in them without such prejudice. Iran, Russia and Turkey have agreed de-escalation zones that, although rightly criticized as enabling later regime attacks, have held longer than those devised in Geneva. Crucially, the Astana talks paved the way for Turkey’s incursions into Jarablus and Afrin in northern Syria, targeting Kurdish militants whom Ankara believes are linked to the Kurdistan Workers’ Party (PKK) in Turkey.

The battle against the Kurds is where Turkey and Iran find the most common ground. Both states have struggled with Kurdish insurgencies for decades, and the autonomy of Iraq’s Kurdish region has only fanned the flames of ethno-nationalist sentiment among both state’s Kurdish populations. In October 2017, Iran and Turkey jointly closed their borders and airspace to all traffic in and out of Iraqi Kurdistan after an unrecognized independence referendum there the previous month. Also in 2017, Turkey announced a wall along the border with Iran to combat cross-border smuggling, a move welcomed by Iran, which has struggled to tackle the problem. Together with Iraq, the two countries carried out a joint anti-PKK operation in December. Iran is no fan of Kurdish aspirations for autonomy in Syria, and considerations of how both Turkey and Iran can benefit from Turkish incursions into northern Syria likely played a dominant role during General Bagheri’s visit to Turkey last year. Interestingly, given the three countries’ cooperation in the Astana talks, the Turkish firm Unit International announced last year that it had signed a $7-billion agreement with Russia’s state-owned Zarubezhneft and Iran’s Ghadir Investment Holding to drill for oil and natural gas in Iran, opening up a new front for expansion in Turkey’s energy industry.

Warmer Turkish-Iranian relations must also be viewed in light of the regional balance of power. The ascendance of (Iranian-backed) Shiite influence in the Middle East has been met with stiff resistance from predominantly Sunni Saudi Arabia. As Ankara has sought a more influential regional role, Turkey has also irked the members of the Arab League, stoking tensions with Riyadh. These came to a head with last year’s Saudi-led blockade of Qatar. As the bulk of the Gulf Cooperation Council (GCC) rounded on oil-rich Qatar for cozying up to Iran and pursuing its own foreign policy goals in the region, including allowing a Turkish military base on its territory, Turkey and Iran stepped into the fray. Turkey and Iran kept Qatar supplied with food, and Iran allowed Qatar Airways to use its airspace. In November 2017, Turkey, Iran and Qatar signed a deal easing the transport of goods and boosting trilateral trade, offering a lifeline to Qatar, which is still locked in a dispute with its neighbours. In supporting Qatar, Turkish and Iranian interests once again aligned, this time in opposition to Saudi Arabia.

However, the animosity between Riyadh and Ankara is not limited to Turkey’s stance on Qatar. In early March 2018, Saudi Arabia’s Crown Prince Mohammed bin Salman (also known as MBS) accused Turkey of being part of a “triangle of evil” with Iran and hardline Islamist groups. This attack is the most senior and public made by Riyadh against Ankara and comes as the prince instigates a global PR campaign to white-wash international opinions of Saudi Arabia.

The comments were also evidence of growing competition between the two states, with MBS denouncing Turkey for attempting to revive the Islamic caliphate, which collapsed almost a century ago following the birth of the Turkish republic. As the guardian of the two holiest sites in Islam, Saudi Arabia’s monarchy holds a revered position in Islamic culture, a position that once belonged to the Ottoman sultans. Erdogan, whose Islamic AK Party champions the use of Ottoman nostalgia, covets the standing in Muslim eyes that Riyadh enjoys and has won considerable public support for its stance on Palestine and its willingness to host Syrian refugees since 2011. From MBS’ comments, this does not seem to have gone un-noticed in Saudi circles.

Yet despite noticeably closer ties, Turkey and Iran are far from being friends. Given their opposing stances on the future of Syria and both countries’ wider ambitions for regional influence, they are likely to lock horns in the future. But as partners of the moment, they are ideally suited. 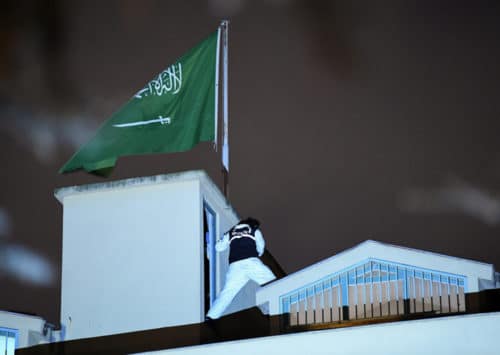 Turkey and Saudi Arabia – What Does the Khashoggi Affair Mean?
With the constant fear of Ankara releasing the tapes and sabotaging Riyadh’s attempts to deny or conceal their involve...