Fanack Home / Turkey / Past to Present / With Islamization, Erdogan Is Reshaping Atatürk’s Turkey

Turkey has been a bastion of secularism in the Middle East for much of the 20th century. However, after 16 years under President Recep Tayyip Erdogan’s Justice and Development Party (AKP), accusations of Islamization are widespread.

In the early 2000s, the AKP was praised for its religious liberalization, but in recent years the government has actively sought to promote religion, trampling on freedoms and drawing ire at home and abroad.

Under Erdogan, Ankara has done much to encourage a more pious and conservative society. Taxes on alcohol and cigarettes are among the highest in the world, driving some to brew their own booze, compulsory religious teaching is more widespread in schools and official rhetoric is laden with messages extolling ‘national morals’.

The state religious body has been at the centre of some of the most extreme accusations of Islamization. Earlier in 2018, Diyanet, Turkey’s directorate of religious affairs, said that under Islamic law girls as young as nine could marry. Turkish law prohibits marriage under the age of 16, and the religious body later stated that it does not approve of child marriages. Yet the controversy is just the latest in a string sparked by Diyanet, including rulings with controversial stances on incest and even left-handed eaters.

Despite legal restrictions, child marriage is widespread in rural, socially conservative areas that typically back the AKP, and the child-marriage incident enraged secularists, many of whom feel that the secular basis of modern Turkey is under increasing attack from political Islam. They fear a country where such rulings, loosely based on Koranic edicts, are given priority over the rule of law. Some 16 years after the AKP swept to power, Turkey’s relationship with Islam is becoming an increasingly important battleground.

This Islamization has been slowly but surely etched into the country’s landscape, literally and metaphorically. Turkey’s post-2000 construction boom has included 17,000 new mosques built by the government, making the minaret an ever more common feature of the skyline.

Istanbul, largely considered progressive, has not escaped the change. In 2016, a mosque more than 150,000 square feet in size was inaugurated on a hill above the city. Boasting the world’s tallest minaret, it is visible from much of the city, prompting Kemal Kilicdaroglu, the leader of the main opposition party, to brand this another step towards Turkey becoming an Islamic republic.

While Turkey’s population is overwhelmingly Sunni Muslim and the country was for hundreds of years the seat of Muslim power during the Ottoman Empire, since the founding of the secular republic in 1923, Turkey’s official relationship with Islam has been largely neutered.

Yet in a time of such monumental change, some AKP politicians have felt emboldened to attack the very secular foundations of the republic, in what would have been considered a criminal offence by many until a few years ago. Indeed, Erdogan himself was once jailed for reciting Islamic poetry in public.

Since 1937, secularism has been written into Turkey’s constitution. But in April 2016, the AKP speaker of the house declared that the new constitution should be a “religious constitution”. He encouraged the traditional reference to secularism to be removed, and argued that a reference to God should be included. While the final referendum did not support this suggestion, such a declaration from a senior politician is no doubt a sign of times to come.

Preaching from the Blackboard

The influence of Islamist thought on the state and its organs is an emotive issue, particularly when it comes to education. In 2017, Ankara rewrote the country’s school curriculum, transforming a staunchly republican syllabus to one infused with Islamic doctrine. Lessons on the founders of the Turkish Republic were stripped bare, opportunities to study Ottoman, Arabic and Koranic subjects were generously broadened and, most alarmingly, evolution was no longer taught to all students. In the government’s eyes this was all justified in its quest to “protect national values” by teaching a “national and moral education”.

In 2014, a change in rules saw some 40,000 students forced to attend religious Imam Hatip schools, outraging many, particularly among the secular-leaning population who have decried Erdogan’s attempts to engineer a ‘pious generation’. Enrolment in these religious schools, which were originally designed to teach imams, has rocketed from 63,000 to over a million students since 2002, when the AKP came to power.

The schools have been the bedrock of the AKP’s dominance, not just in politics but also in the police, judiciary, business and military. Erdogan attended an Imam Hitap school himself, as did many prominent members of the AKP’s ‘New Turkey’. Cleric Fethullah Gulen’s Hizmet movement funded many of these schools during the pre-AKP era and he boasted of using them to raise a generation that could topple the rulers of republican Turkey. The avalanche of arrests across the public sector following the 2016 alleged Gulenist coup attempt is a testament to just how successful these schools were. Erdogan is now looking to a broader Islamization of Turkey’s schools to solidify his legacy, transforming the country from the bottom up.

The Islamization debate has inevitably had a gendered dimension. While the AKP brought a liberalization of controls on women wearing headscarves, in recent years the government has begun to lay out a disturbing template for women’s place in society.

In 2014, Erdogan proudly stated that “women should know their place”, and that “gender equality is against human nature”, while his prime minister was publicly lampooned for saying that women ought not to laugh in public.

Attacks on women, especially within their own homes, are common in Turkey, but recently public attacks on women deemed to be ‘un-Islamic’ have begun to rise. During Ramadan in 2017, a female student was physically assaulted on a bus in Istanbul, by a man outraged at the shorts she was wearing during the Islamic holy month.

Turkey’s rapprochement with Islamist thought is not limited to domestic matters. Erdogan has been a key supporter of the Muslim Brotherhood since Egypt’s now-imprisoned President Mohamed Morsi came to power in 2012. Ankara also developed controversial ties with armed Islamist groups in Syria and has been the loudest international voice for the Palestinian cause, with Hamas’ leader making several trips to the Turkish capital. This change has been warily noted abroad. A 2016 leaked German government report described how the ‘Islamization of Ankara’s domestic and foreign policy since 2011’ has turned the country into a bastion of Islamist groups in the region. Whereas Turkey’s republicans would have shied away from any such public international links, Erdogan has embraced them, heralding to the world Turkey’s new direction and a for the country that he has long sought to achieve. 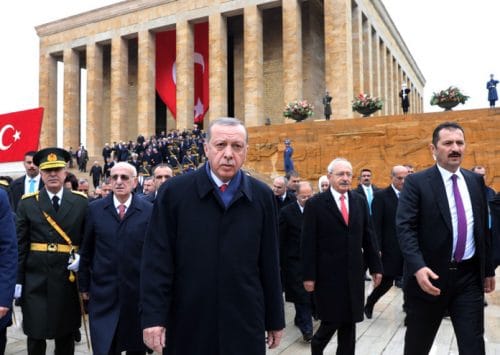 Recep Tayyip Erdogan: Turkey’s Saviour or Sultan?
Erdogan has cemented his place in the history books as modern Turkey’s second-most notable ruler, but he seems determi...