Fanack Home / Turkey / Past to Present / Istanbul’s Mayoral Rerun: Will Everything Be Great?

Istanbul’s Mayoral Rerun: Will Everything Be Great?

Her sey cok guzel olacak (‘everything will be great’) has become the unlikely mantra of one of the biggest upsets in recent Turkish politics. Despite the backing of most of the country’s media, which are almost totally state-owned or aligned, and with a candidate who is a household name (former Prime Minister Binali Yildirim), the ruling Justice and Development Party (AKP) failed to beat Ekrem Imamoglu of the Republican People’s Party (CHP) for Istanbul’s mayoral seat. Although Imamoglu won the 13 March 2019 election by a hair’s breadth, the victory represented a political tsunami, turning the tide on nearly two decades of AKP electoral dominance in Turkey.

The Supreme Electoral Council annulled Imamoglu’s victory, following pressure from the AKP, and called for the election to be rerun on 23 June, nearly three months after the original vote. Suspicions that the delay was an effort to suppress the turnout of CHP voters – many of whom leave the city for the coast during the hot summer months – prompted CHP-aligned councils in several popular beach resorts to publish tongue-in-cheek weather warnings about storms, unheard-of humidity levels and even snow on election day. This viral campaign, light-hearted as it is, points to common fears that the AKP will stop at little to ensure victory in the rerun and that every vote will matter.

Fight to the political death

Polls indicate that Imamoglu retains a slim lead over Yildirim (the poll was commissioned by the AKP), but neither side has let up with their campaigning.

President Recep Tayyip Erdogan has consistently framed the rerun as a ‘victory for democracy’ and a vote ‘against organized corruption’, despite widespread condemnation for rerunning a seat that his party lost while validating similar seats that his party won. The AKP’s accusation of corruption focused on the presence of non-civil servants among polling station staff, which the Supreme Electoral Council upheld. Confusingly, however, the same authority ruled to keep the same electoral boards, in essence replicating the conditions of the first vote.

Erdogan made his name as Istanbul’s mayor in the 1990s, but the city has more than sentimental value for him; it is a valuable prize. With a huge budget of some $9.5 billion that can be directed towards the kind of mega-infrastructure projects that the AKP has used to shore up the Turkish economy and public support, the city’s loss would be keenly felt in Ankara’s political circles. During his 19-day tenure as Istanbul’s mayor, Imamoglu said he had already uncovered a raft of wasteful spending, stunning debt levels and expenditure dominated by lucrative contracts to private companies.

He has continued his political fight in the manner he started, employing a hopeful, upbeat strategy that his campaign describes as one of ‘radical love’. Using a no-holds-barred style largely unknown in Turkey, he has shared everything from his weekly shop to election night rallies (when state media bizarrely stopped coverage). On election night alone, he attracted hundreds of thousands of new followers on social media, and his live broadcasts have been watched millions of times. He has similarly relied on social media to reach out in the weeks following the vote’s annulment. True to his promise of increased transparency, he has also broadcast his mayoral meetings online.

But it is not only technology that he has used to his advantage. He was seen repeatedly at mosques during the Muslim holy month of Ramadan – a tactic that is not unusual for CHP leaders but holds added significance for Imamoglu and his political image. Imamoglu, whose name literally translates as ‘imam’s son’, has made Turkey’s religious roots central to his image, frequently affirming his comfort with daily religiosity (a trait uncommon to most CHP leaders), and displaying a familiar approach to Islam within Turkish life. This approach seems to have been crucial to his electoral success, winning over many AKP voters who pride themselves on their attachment to their interpretation of religious virtue and Islam in general.

A battle of personalities

One of the most interesting facets of the rerun has been Erdogan’s prominence in Yildirim’s campaign. Although the president has always been a full-throated backer of his former PM (with his face even appearing on the premature ‘thank you’ posters that officials put up across Istanbul following the first vote), he has been keen to ensure the city knows he is Imamoglu’s real opponent. He has fronted most of the AKP rallies and led the rhetorical battle too.

In recent weeks, this political tussle has reached somewhat farcical levels. In response to a woman shouting Imamoglu’s pledge that ‘everything will be great’ to Erdogan during a publicity event on Istanbul’s vintage tramline, he shouted back that ‘everything will be better’. It was a feeble retort perhaps, but his supporters took to social media to try and take back the online (and electoral) initiative. They have not had much success, and this slogan duel is emblematic of the wider political battle. The AKP has been on the back foot since the beginning of the rerun, struggling to compete with the energy, optimism and personal touches of Imamoglu’s campaign, instead trotting out the same tired figures and promises, many of which seem to hold little water with voters following the economic struggles of the post-2016 era.

The Kurdish vote may well be the deciding factor in the rerun. Kurds made up the majority of non-voters in the first election, and Erdogan has both courted and attacked them in the past in an effort to hold on to power. They may not be the obvious supporters of Erdogan’s now-establishment AKP, especially given the presence of a (heavily repressed) pro-Kurdish party and Erdogan’s coalition with the Nationalist Movement Party. Turkish governments have long championed hawkish stances towards security through repression in the country’s largely Kurdish south-east, where Kurdish militants have waged a long-running insurgency. Erdogan has been savvier, exploiting the security situation to both cow and win over Kurdish voters, and the AKP’s socially conservative stance does appeal to many similarly conservative Kurds. Indeed, the government already appears to be making overtures to certain Kurdish groups. However, such an approach will only work if the AKP can paint Imamoglu as an irreverent or dangerous liberal. He seems to have left them unable to do either.

The political landscape has also shifted since the last vote. The Iyi Party, a firm opponent of the AKP, appealed the annulment of the election, which was dismissed, and the small, Islamist Justice Party has come out in support of Imamoglu. Moreover, another of Erdogan’s former PMs, Ahmet Davutoglu, sharply criticized the AKP amid rumours he will form a new party. Former AKP president Abdullah Gul has long been expected to do the same. Although these shifts are unlikely to affect the rerun, a splintering of AKP support may hint at the country’s fatigue with Erdogan’s rule.

If the rerun is clouded in the same controversy as the first vote, it will likely be the final nail in the coffin of Turkish democracy. Conversely, if Imamoglu wins again, and the vote is uncontested, it will herald a new balance of power and perhaps a new era of Turkish politics. 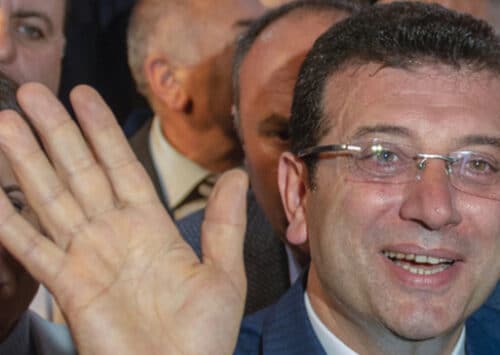 Ekrem Imamoglu, the Man Who Unseated the AKP in Istanbul
Both Imamoglu and Erdogan were born and raised in humble, conservative families. Aside from these shared roots and a lov...