Politics of confrontation dominate the AKP third term in office

When his Justice and Development party (AKP) won a third mandate, with nearly 50 percent of the popular vote in June 2011, Prime Minister Recep Tayyip Erdoğan announced that his new term would be an “era of mastery.” He also vowed to seek consensus across society to construct a new democratic constitution for Turkey.

Far from making good on these promises, however, the prime minister rapidly abandoned the reformist goals of his early years in power. After successfully sidelining the army, he could have ushered in a period of social peace and greater democracy. Instead, he embraced the top-down approach adopted in the past by the state and sought to impose his own conservative agenda on society. With his eye on the presidency, he put pressure on the media and cracked down on dissenters in order to consolidate his power.

In this polarized atmosphere, political parties were unable to reach a consensus on a new draft constitution, and, after months of regular meetings, the commission tasked with writing a new document to replace the constitution introduced by the military in 1982 eventually acknowledged its failure in November 2013.

Since the 2011 elections, tension has been mounting steadily, as Prime Minister Erdoğan, adopting an increasingly authoritarian style, has sought to interfere with citizens’ lifestyles, introducing new limitations on alcohol consumption and condemning abortion and Caesarean sections. In 2012, his government transformed the country’s education system on short notice, after little or no consultation with civil-society groups.

On a more positive note, the AKP government launched a new Kurdish peace initiative in 2013, after the failure of an earlier attempt in 2009. This time, the authorities publicly involved the jailed PKK leader Abdullah Öcalan in the process. Although Turkey’s Kurds can claim few concrete gains from the process and the truce with the Kurdish rebels remains fragile, the process did put an end to the resurgence of violence that had claimed many lives in the previous couple of years.

The Turkish government also improved its relations with the Iraqi Kurdish authorities. During a meeting in Diyarbakır with Iraqi Kurdish leader Masoud Barzani in November 2013, Prime Minister Erdoğan used the name “Kurdistan” for the first time.

The Kurdish problem remains one of Turkey’s key issues, and it has acquired new dimensions with the conflict in Syria and the instability in Iraq. But the strongest challenge to Prime Minister Erdoğan’s rule came unexpectedly in May 2013, when his plans to turn Gezi Park in central Istanbul into a shopping mall and luxury residences met with opposition from environmentalists and people unhappy with the building boom and the rapid transformation of Turkey’s large cities. The brutal methods used by the police to remove a small group of peaceful demonstrators ignited a nationwide series of protests, which lasted several weeks, mobilized millions, and paralyzed the country.

The crisis could have been contained had the authorities adopted a conciliatory attitude, but, as the casualty toll mounted, Prime Minister Erdoğan denounced the movement as a conspiracy against his government spurred by foreign powers. Six demonstrators and one police officer were killed during the protests. More than 4300 people were wounded by tear-gas canisters, police truncheons, rubber bullets, and water cannons. Three more people died later from tear-gas inhalation. In the aftermath of the unrest, court proceedings were launched against more than 5000 people, while several journalists lost their jobs because of coverage critical of the government. Plans to cut down the trees in Gezi park were eventually shelved, but sporadic unrest continues to affect Turkey’s cities, mainly Istanbul, and is still met with a strong police response.

In early 2014, the authorities, which had denounced social media, imposed a ban on Twitter and YouTube, but the prohibitions were later lifted by court decisions.

Little by little, these democratic setbacks are eroding the reforms of the early period of AKP rule. After Erdoğan alienated the liberals who had initially support his government, he fell out with another erstwhile ally, the Gülen movement.

In December 2013, corruption allegations emerged against cabinet ministers and their relatives, forcing a government reshuffle. Further leaks targeted Prime Minister Erdoğan and his son Bilal. The claims surfaced after the alliance between the Hizmet movement, led by Pennsylvania-based cleric Fethullah Gülen, and the government broke down irreversibly and turned into open conflict.

A rift had widened since a prosecutor close to the Gülen movement launched proceedings in February 2013 against Hakan Fidan, the head of MIT, Turkey’s intelligence service, for conducting secret meetings with PKK (Kurdistan Workers’ Party) figures in Oslo. Erdoğan successfully defended his protégé, but the episode left him wary of Gülenist influence on the judiciary and police.

The graft allegations, in the form of leaked tapes published on the Internet, surfaced after the prime minister announced he would close down all dershane, the cramming schools widely relied upon by Turkish students to prepare for national exams; many of these schools are run by the Gülen movement.

Erdoğan dismissed the claims as yet another plot against his rule and accused the Hizmet movement of being a “parallel state.” A massive purge of the police and the judiciary was launched, raising questions about the separation of powers in Turkey. Numerous senior figures, starting with the prosecutor who had ordered the arrests of the ministers’ relatives, ended up being transferred to new positions or fired.

The results of the municipal elections held on 30 March 2014, won by the AKP with 43 percent of the vote (compared with 39 percent in the March 2009 local poll), show, however, that the corruption case has not significantly eroded the prime minister’s popular support, although Erdoğan’s confrontational approach has deepened social divisions in Turkish society.

For now, the prime minister’s ability to project the image of a powerful leader through an increasingly subservient media continues to appeal to many conservative voters, who have benefited from Turkey’s economic growth in the past decade and from the social reforms, such as improvements in access to the healthcare system, introduced by the AKP. The lack of a credible opposition offering a clear vision for the future also works in the ruling party’s favor. Abroad, however, Erdoğan’s authoritarian attitude and his fiery anti-Western rhetoric have tarnished his image. Politicians on all sides continue to pay occasional lip service to Turkey’s EU accession bid, but the process is clearly on the back burner.

On July 1, Prime Minister Erdoğan formally announced his candidacy to replace the current head of state, President Abdullah Gül, when his mandate ends in August 2014. Erdoğan, who is widely expected to win the popular vote, will be competing with Ekmeleddin Ihsanoğlu, former head of the Organisation of the Islamic Conference, nominated by the two main opposition parties, the Republican People’s Party (CHP) and the Nationalist Action Party (MHP) and Selahattin Demirtaş, candidate for the pro-Kurdish People’s Democratic Party (HDP).

As the presidential elections approach, Prime Minister Erdoğan’s aspirations are however facing a new challenge, this time from abroad. The fall of the northern Iraqi city of Mosul, captured by the radical Islamic State of Iraq and Syria (ISIS) on 11 June 2014, and the kidnapping of Turkey’s consul general, along with 48 staff and family members, has turned the spotlight on the government’s flawed foreign policy.

The prime minister has made no secret that he won’t be satisfied with the president’s current limited powers. Because constitutional changes have not been enacted, Erdoğan will be elected according to existing rules. Who will be prime minister until general elections to be held in 2015 remains unclear, and it is uncertain whether, once in the Çankaya presidential palace, Erdoğan will be able to convince parliament to increase the powers of the presidency. What is in no doubt, however, is that unless Mr. Erdoğan softens his one-man approach to governance and adopts a more tolerant attitude toward criticism, Turkey’s social fabric will come under more strain, and democracy will be further eroded. 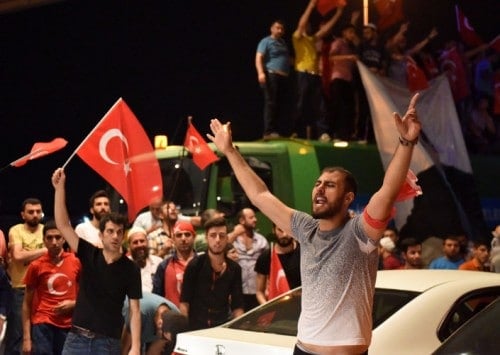 The Failed Coup in Turkey and Its Consequences
A military coup attempt in Turkey on Friday 15 July failed, but the future of the country’s democracy, and survival as...