For nearly six weeks a court case in New York has gripped the Turkish media. Involving corruption allegations, the millionaire husband of a pop star, leaked wire taps and international sanctions, the story seems closer to a movie script than real life. But why has this case made such waves in Turkey, and what does it mean for the future?

On 3 January 2018, Turkish banker Mehmet Hakan Atilla was found guilty of helping Iran evade sanctions, as mandated by the American Iran Threat Reduction and Syria Human Rights Act (ITRA) of 2012. The charges included sanctions evasion, bank fraud and obstructing the actions of the United States (US) Treasury. In November 2017, gold trader Reza Zarrab, the purported ringleader of the Turkish scheme, pled guilty to several lesser charges and chose to cooperate with prosecutors.

Both men had been at the centre of a scheme involving the Turkish government and Turkey’s second largest state-owned bank, Halkbank, where Atilla was a deputy general manager.

Atilla’s testimony disclosed details of his work between 2012 and 2016 in Turkey and Dubai, unveiling a conspiracy between the Central Bank of Iran, the Iranian Oil Ministry, Turkey’s former Economy Minister Zafer Caglayan and Halkbank’s ex-CEO Suleyman Aslan.

Evidence suggests that Caglayan and Aslan provided Iran with access to billions of dollars of oil payments frozen by US sanctions. The Turkish operation converted the funds to gold that was then smuggled to Dubai in suitcases.

All told, Zarrab said he helped shift “a few billion euros” from Halkbank accounts back to Iran. He may in fact have helped Iran pocket as much as $100 billion, making it one of the largest evasions of international sanctions in modern history. Zarrab himself, who was arrested by US officials while on holiday in Disney land in 2016, admitted to having made somewhere in the range of $100-150 million from the scheme.

This latest corruption scandal is linked to a previous scandal in 2013, when the Turkish authorities investigated Zarrab, Erdogan’s son-in-law and current Prime Minister Binali Yildirim, in a probe that has since been connected to police and prosecutors with ties to the exiled Turkish cleric Fethullah Gulen. It was the 2013 investigation, which Erdogan managed to quash, that signalled the start of open conflict between the AKP and Gulen supporters.

Zarrab also claimed that Caglayan, then economy minister, had accepted bribes of more than $37 million annually to permit him to grow his money-laundering agreement with Iran. Notably, Zarrab testified that Erdogan himself had in 2012 directed Turkish banks to participate in the money-laundering scheme.

Erdogan has been a fierce critic of Syrian President Bashar al-Assad’s regime, yet through Zarrab and Atilla, his ministers were indirectly helping to fund Iran’s support for Damascus.

However, it seems that rather than financial greed, although that surely played its part, domestic considerations drove this secret deal. The gold trade helped boost Turkey’s flagging export numbers at a time when those numbers might have hurt Erdogan’s chances for re-election.

As painful as Zarrab’s testimony must have been for some in Ankara, the revelations seem to have done little to rock the foundations of the current Turkish government, and Erdogan’s hold on power looks secure.

When Zarrab and Atilla were taken into custody in the US, the Turkish government took swift action to try and limit the damage a court case could do, first by paying former senior American officials to lobby on its behalf, then by claiming the case was an anti-Turkish conspiracy and opening its own investigations into two of the US prosecutors overseeing the case, to determine whether evidence was illegally obtained. After it became clear that Zarrab might be cooperating with US investigators, Turkey’s foreign minister called him a “hostage” who was being forced to testify against the Turkish government.

Erdogan has also personally lobbied the US government to release Zarrab and has linked the case to the failed 2016 coup against him, claiming that the same forces behind the putsch – which he blames on Gulenists – are behind the case against Zarrab.

In addition, he has claimed that the case is part of US efforts to put pressure in his government, including as a tool to blackmail Ankara to submit to US policy regarding the Kurds in northern Syria, whose hopes for an independent state Turkey is determined to quash. The case’s use of evidence from the previous corruption scandal in 2013 has allowed Erdogan to further claim conspiracy and Gulen-backed scheming against his presidency.

Although Zarrab used to be a favourite of the AKP, and married to one of Turkey’s biggest pop stars, his fall from grace has been rapid. Following his testimony and cooperation with the US authorities, Ankara confiscated his assets, ostensibly as part of an investigation against the trader.

The case comes amid the worst deterioration of US-Turkish relations for decades, and its fallout is unlikely to be over.

Given the guilty verdict, a substantial US fine against Halkbank or even sanctions banning it from trading the dollar could be on the table. A leading French bank was fined $8.9 billion for lesser transgressions violating the sanctions against Cuba, Sudan and Iran.

In October 2017, Washington suspended its visa services in Turkey, after Turkish authorities tried to arrest two of its local embassy staff. Ankara responded in kind, leading to a three-month deadlock before the US received assurances that its staff would not be at risk from Turkish authorities.

The Turkish lira has been struggling for months and this scandal, which has implicated Turkish banks in international money laundering, is likely to damage the health of the Turkish economy further. No doubt aware of this, all eyes will be on Washington to see how it responds. With Turkish rhetoric growing ever more bellicose over US support for Kurdish groups in northern Syria, the US punishment for these financial transgressions has the potential to affect far more than markets in the Middle East. 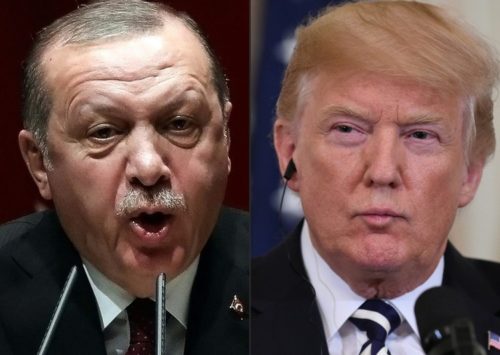 Dangerous Game: Is Hostage Diplomacy Straining US-Turkey Relations?
This spat coincides with growing trade tensions between Ankara and Washington. The US is now reviewing Turkey’s duty-f...