How Turkey has Changed Its Stance on Syria

Turkey has played a critical role in the war in Syria, rallying international support for the Syrian opposition, backing its preferred military actors and tussling with Syria’s Kurds. However, over the nearly seven years of the conflict, Turkey’s involvement has changed dramatically. But why?

As the Syrian revolution began in 2011, Turkish President Recep Tayyip Erdogan was one of the loudest voices calling for the removal of Syrian leader Bashar al-Assad. His hostility to Damascus and his backing of the Syrian opposition won him many plaudits among Syrians, especially those forced by the upheaval to leave the country. In comparison, the rhetoric from Ankara in 2017 has been muted. Like other world leaders, Erdogan has had to accept that, with Russian and Iranian backing, al-Assad’s position is safe and he will not lose the war. Where Turkey was once a lynchpin in the anti-Assad coalition, Ankara’s involvement has pivoted to a purely self-serving agenda.

Although initially the war appeared relatively harmless to Turkish interests, with the ascendance of Kurdish self-governance in the country’s north, coupled with the arming of Kurdish militias by Western countries, that has dramatically changed the balance of power.

Turkey has been fighting a low-level insurgency by militants in the Kurdistan Workers’ Party (PKK) for decades, and Ankara understandably fears that the war in Syria will send a flow of arms and experienced fighters across the border into Turkey. The PKK has strong ties with the main Kurdish forces in Syria, including the YPG and Syrian Democratic Forces, which the United States (US) has been supporting in their fight against the Islamic State (IS). Turkey sees the build-up of arms in Kurdish hands in Syria as a direct threat to its own security, and Ankara has been trying to block military aid to these groups since the support was announced but with little tangible success. In light of this, Turkey feels the need to prioritize its own interests – namely blocking the establishment of a Kurdish state or official enclave on its border. To this end, Turkish forces mounted operation Euphrates Shield in 2016. Along with allied Free Syrian Army fighters, Turkish troops split the Kurdish-majority region in two, putting an end to hopes of a contiguous Kurdish enclave.

The operation was nominally aimed at defeating IS, although the Turkish advance was halted when it met forces loyal to al-Assad at al-Bab, creating a zone of influence that, although administered by Syrians, is beholden to Ankara’s wishes.

Turkish media claims that 75,000 Syrians have already returned from Turkey to ‘safe zones’ in their home-land, including areas like al-Bab. Erdogan has long called for internationally backed ‘safe zones’ or no-fly zones in Syria, as a refuge for civilians and presumably to halt the influx of refugees into Turkey, which now hosts more than 3 million. While there is no immediate political pressure in Turkey to see Syrians returned home, indeed they contribute widely to the country’s economy, enabling the conditions for the safe return of Syrians offers considerable political capital for Erdogan.

As with its aid to the Rohingya in Myanmar and the Palestinian cause, Turkey’s humanitarian assistance to the Syrian people is only nurturing the image Erdogan desires as the popular and benevolent leader of the Muslim world.

For the first years of the conflict, the Geneva conferences – United Nations-brokered and Western-backed peace talks – were the principal hope for a negotiated end to the war. Now, however, they lie dead in the water, and the Astana talks between warring Syrian factions, overseen by Russia, Iran and Turkey, are the main vehicle for mediating the conflict. Turkey has always been a critical actor in the conflict and its willingness to participate in Astana has been a slap in the face for European and US peace efforts.

Although the Astana talks are portrayed by many in the West as a tool for Iran and Russia to whitewash their support for al-Assad’s regime, in Turkey they are not seen as a marginal effort to be ignored. Indeed, as Turkey’s relations with Europe and the US continue to deteriorate, most recently after Washington and Ankara stopped issuing visas to each other’s citizens, the Astana talks have presented Turkey with an opportunity to pursue foreign policy objectives independent of its traditional allies. Reportedly, Turkey’s involvement in the Astana talks is also contingent to some degree on Russia and Iran green-lighting a Turkish operation against the Kurdish forces in the now-surrounded Afrin enclave in northern Syria.

Importantly, the four temporary ‘de-escalation zones’ that the Astana talks agreed upon in September 2017 – their most significant result to date – have only furthered Turkish interests in Syria. By legitimizing Turkey’s role as an observer state in the country’s north, Damascus, Tehran and Moscow agreed not to interfere with Turkish operations in the country for the time being. The incising of Idlib province, the main bastion of the Syrian opposition, as one of the zones has enabled Turkey to protect its image as a backer of forces opposed to al-Assad.

Furthermore, involvement in Astana has not affected Turkish cooperation with Syrian rebel groups. These forces, including the extremist elements that control much of Idlib, remain in dialogue with Turkey. October’s incursion by Turkish troops around Afrin was seemingly conducted in concert with fighters from the jihadist alliance Tahrir al-Sham, which escorted Turkish vehicles within Syria. Turkey’s steps away from Western-backed initiatives on Syria have been carefully managed to protect Ankara’s interests and existing relations.

With no quick solutions to the Syrian conflict in sight, Turkey’s approach to the war has become one of self-interest. Gone are the days of demanding regime change. Al-Assad looks here to stay, a fact reflected in Turkey’s changing stance on the war, which is now focused on countering Kurdish military strength. The resurgent Kurdish threat will ensure that Turkey will not be leaving Syria any time soon. 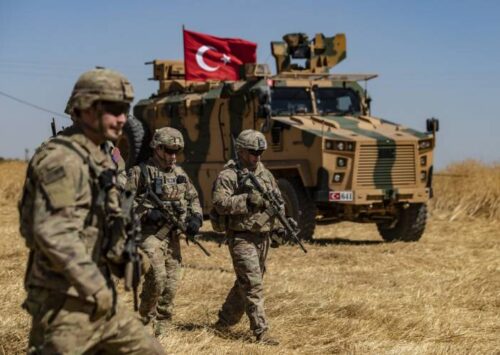 Buffer Zone on Syrian Border: Why the Turkish Obsession?
Erdogan is under growing pressure at home to find a solution to tensions, perceived and real, between Syrian refugees an...