Fanack Home / Turkey / Past to Present / Turkey-Israel Relations: Why Animosity is Not an Option

Turkey-Israel Relations: Why Animosity is Not an Option

The past 15 years have seen any number of upsets to the delicate balance of power that drives the Middle East. The war in Syria, the Arab Spring and Saudi-Iranian competition have rightly seized the lion’s share of international attention. However, rocky relations between Turkey and Israel, damaged to an extent unthinkable 20 years ago, have also played an important but subtle role in shaping regional geopolitics.

In December 2016, Ankara and Tel Aviv exchanged ambassadors, restoring normal relations after five years of diplomatic enmity. But what was behind the breakdown and subsequent rapprochement between the two states? And what does that say about the Middle East today?

Turkey has long enjoyed relations with Israel unlike those of any Muslim-majority nation. These bonds are largely rooted in the Second World War, when neutral Turkey took in thousands of Jewish refugees fleeing genocide in Europe before the state of Israel was founded in 1948. From then on, the secular republicanism of Turkey made Ankara a natural ally in the war-ridden first decades of Israel’s existence. The two states enjoyed joint military exercises, weapons-for-water deals and even a 1950s tri-partite intelligence-sharing pact with Tehran.

But in 2010, these warm ties grew distinctly frosty. Ever since the 2003 election of the conservative AK Party in Turkey, a rift between Israel and Turkey had seemed possible. The desire of Recep Tayyip Erdoğan, then prime minister, to win over Muslims at home saw him take a far more aggressive stance on Israel’s occupation of Palestinian territories than any of his predecessors. In 2010, a flotilla of Turkish ships carrying aid to Gaza and intending to break the illegal Israeli blockade of the Gaza Strip was intelligence-sharing by Israeli commandos in international waters. Clashes between the crew on the Mavi Marmara, one of the five ships, and Israeli soldiers resulted in the death of ten Turks and provoked outrage from Ankara.

Relations between the two states reached an all-time low in the attack’s aftermath, with ambassadors expelled and military co-operation terminated. Erdoğan demanded an apology from Israel, the lifting of the blockade of Gaza and compensation for the families of the activists killed in the raid. Israeli Prime Minister Benjamin Netanyahu refused.

Four years thereafter, Turkish-Israeli relations saw little tangible improvement, despite the efforts of the United States government, which was keen to see two regional allies mend their ties. However, as the shockwaves of the Arab Spring swept the region, the new balance of power prompted a reconsidered approach. In 2013, as the war in Syria ramped up and millions of refugees began flooding into Turkey, Netanyahu apologized to Erdoğan in a phone call.

With Turkey at loggerheads with Iran over ally Bashar al-Assad’s bloody conduct, and Israel nervous about the prospect of a nuclear agreement between Tehran and world powers, the two states began to draw closer. In mid-2016, Ankara and Tel Aviv announced that they had finally reached a deal to restore diplomatic relations. Turkey’s agreement to drop all criminal and civil claims against Israel and its soldiers was bought with a $20-million compensation package, while Israel agreed to loosen restrictions on the passage of aid into Gaza. Although the blockade on Gaza remains – an initial sticking point in the negotiations – Turkey was able to deliver some 11,000 tons of aid to the Palestinian enclave through the Israeli port of Ashdod, and implement several much-needed infrastructure projects, including a hospital and desalination plant. To facilitate this, the Erez border crossing was opened to aid vehicles in July 2016 for the first in nine years. By year’s end, two new ambassadors had been appointed, returning diplomatic relations to an improved, if still not warm, state.

A less-public sweetener that eased the deal’s passage appears to have been the expulsion of several Hamas leaders from Turkey, including Saleh al-Arouri, founding commander of the group’s military wing. While Turkey’s commitment to the Palestinian cause remains resolute, Turkey’s desire to shore up its regional position has demanded such pragmatic concessions.

As with so many dealings in the Middle East, the politics of hydrocarbons casts a long shadow. For years, Israel has been exploring the untapped natural gas fields off its Mediterranean coast. Meanwhile, Turkey’s relations with its primary natural gas supplier, Russia, have been rocky since Moscow’s intervention in Syria. A proposed pipeline project between Russia and Turkey was mothballed in the fallout from Turkey’s downing of a Russian jet in November 2015, although the deal has since been reinstated, and Turkey is even considering buying Russian anti-aircraft missiles.

However, despite this smoothing of tensions, somewhat serendipitously, thawing Turkish-Israeli relations provide both countries with a level of economic insurance in the midst of continued regional turmoil. Part of the initial negotiations between Turkey and Israel included a natural gas pipeline under the Mediterranean, presumably intended as a foil against a total break with Russia. Economics is just as much a driver of this rapprochement as politics, and animosity is a luxury that neither can afford. 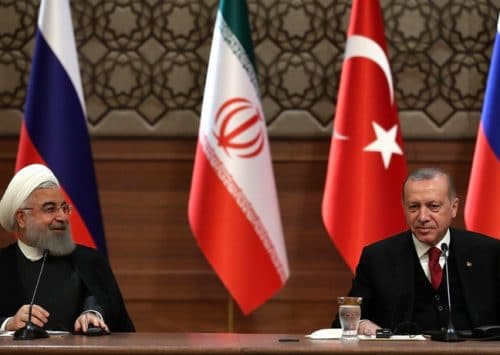 Iran and Turkey: Partners of the Moment
Yet despite noticeably closer ties, Turkey and Iran are far from being friends. Given their opposing stances on the futu...