Fanack Home / Turkey / Past to Present / What Does Referendum Reveal about Turkey?

What Does Referendum Reveal about Turkey?

Turkish citizens voted on 16 April 2017 to approve changes to their constitution and grant the country’s president, Recep Tayyip Erdoğan, extensive executive powers. The result will likely be viewed as a key moment in the country’s political history as well as a personal highpoint of Erdoğan’s career. Voter turnout was around 85 per cent, one of the highest ever, with 51.4 per cent of votes were cast in favour of transforming the parliamentary political system, which has been largely untouched since Mustafa Kemal Atatürk founded the republic in 1923. But what does the referendum reveal about the country itself?

Turkey’s new political form is cast in the mould of one man: President Erdoğan. The referendum was his project from the outset. The constitutional changes, most of which will come into effect after the next elections in 2019, give him vastly expanded powers to appoint ministers, prepare a budget, choose the majority of senior judges and enact certain laws by decree. He will also become the head of the executive, as well as the head of state, while retaining ties to his political party. The role of the prime minister will be scrapped and the new post of vice-president (possibly two or three) will be created. Parliament will effectively lose its right to scrutinize ministers, and Erdoğan could now stay in office until 2029. Many have been quick to liken this new Turkey to a one-man state

Nothing has been deemed too high a price to pay for victory in this vote, with even Turkey’s international relationships put at risk. In recent years, Erdoğan’s rhetoric has turned against a strengthening of ties with the European Union (EU), but as Turkey’s largest trading partner, Ankara needs the EU now more than ever. The EU accounts for almost 55 per cent of Turkish exports, and just under two thirds of its $12 billion of foreign direct investment. Yet when several European cities banned ‘Yes’ campaign rallies or political visits by government ministers, Erdoğan was not afraid to burn these bridges. After both Germany and the Netherlands put restrictions on his efforts to win the votes of the several million Turks living in those countries, he branded their leaders ‘Nazis’, drawing international ire.

Dissent in the Ranks

Since 2002, Erdoğan’s Justice and Development Party (AKP) has ruled almost unchallenged, winning strong majorities in all but one election. Under Erdoğan’s leadership, the party has seemed undefeatable, However, the referendum has unveiled growing dissent in the party’s ranks. Erdoğan’s thirst for power appears to have rankled some of his closest allies. Abdullah Gül, Turkey’s previous president and a senior figure in the AKP, distanced himself from the campaign. Erdoğan and Prime Minister Binali Yıldırım twice met with former AKP ministers to drum up support, and Gül was absent on both occasions. He expressed his disquiet with Erdoğan’s campaign more publicly too, refusing to attend a ‘Yes’ rally in his hometown of Kayseri on 22 April 2017. Last year, Gül said that a presidential system was not needed in Turkey.

Another prominent AKP politician to have deviated from the Erdoğan line is former Prime Minister Ahmet Davutoğlu. Sidelined from the top echelons of Turkish politics in 2016, Davutoğlu’s formerly close relations with Erdoğan seem to have grown frosty. When Davutoğlu was head of the AKP in 2015, the promise to adopt an executive presidency was removed from the party’s manifesto. He played a marginal role in the ‘Yes’ campaign and, in January 2017, he described parliament as the “shield and spine of democracy”.

Yet unease with the ‘Yes’ campaign was not limited to the political top brass. Even in Anatolia, usually the heartland of AKP support, voters expressed concern at the prospect of further concentration of power in Erdoğan’s hands.

In an effort to secure the ‘Yes’ vote, deal making was the name of the game. The AKP went as far as reaching across the political divide to forge an alliance with Devlet Bahçeli, the leader of the right-wing Nationalist Movement Party (MHP), who has fiercely criticized government corruption and authoritarianism in past elections. It is widely believed that this unusual coalition was only possible because Erdoğan promised Bahçeli a vice-presidential post in the new system.

The Kurds, usually fierce government critics, were also targets of government sweet-talk, with promises of long-sought-after security, and even monetary gifts, if the constitutional changes were accepted. All the while, the leaders of the pro-Kurdish People’s Democratic Party (HDP) continued to be arrested on terrorism charges.

But even stranger deals were made. On 29 March, 2017 Erdoğan signed into law an emergency decree authorizing beauticians to operate certain laser hair removal tools, a last-ditch attempt to win over more liberally minded youngsters. All of these deals point to government insecurity over which way the vote would go on 16 April 2017.

Throughout the campaign serious concerns were raised about the state of democracy in Turkey. Kemal Kılıçdaroğlu, leader of the main opposition Republican People’s Party (CHP) and the ‘No’ campaign, repeatedly complained of the use of supposedly apolitical state organs, funds and even government-funded mosques abroad to support the ‘Yes’ vote. In the wake of the referendum, claims of vote rigging have been made, and two international monitoring missions have published a list of irregularities connected to the campaign and vote itself. The provenance of some 2.5 million votes – just over twice the winning margin – has been questioned, with accusations of ballot-box stuffing in almost all electoral districts. Throughout the campaign, ‘No’ rallies were regularly obstructed whereas their ‘Yes’ counterparts often received free transport from theoretically apolitical local government officials. Furthermore, Kılıçdaroğlu accused the electoral commission of changing the rules after the vote had started, provoking outrage and demands for a partial recount from the CHP.

Perhaps most worryingly, the campaign itself was marked by what the Organization for Security and Cooperation in Europe described as an ‘unlevel playing field’. Civil society actors were blocked from participating, state media (which now accounts for some 80 per cent of all Turkish media) heavily favoured the ‘Yes’ campaign, opposition politicians were jailed and the vote took place under a state of emergency. In the charged political atmosphere of the campaign, Erdoğan likened his opponents to Islamic State terrorists, and physical attacks against ‘No’ advocates were reported. The government even tried to remove the word ‘No’, whether it was related to the campaign or not, from public view. Although Erdoğan has hailed the vote as a victory for democracy, and observers have declared it ‘free’, many will question whether it was at all fair.

When the AKP first swept to power, Erdoğan promised a “New Turkey”. This referendum may well be his coup de grace, completing a state project far removed from the parliamentary democracy he inherited, and shaping a public discourse in which patriotism is now widely judged in terms of loyalty to Erdoğan himself. He once famously said that “democracy is like a train, you get off once you have reached your destination”. Many watching Turkey will want to know if the referendum marked that endpoint. 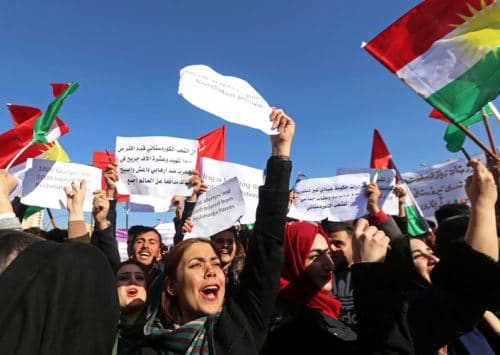 Post-referendum, No Good News for the KRG
The referendum sent shock waves around the world, inspiring Kurds to the possibility of an independent state and alarmin...

Governance - MiddleEast - past to present - Turkey