Fanack Home / Turkey / Past to Present / Turkey since the Election

Turkey since the Election

In June 2018, President Recep Tayyip Erdoğan was elected to the newly empowered role of president of Turkey, winning just under 53% of the popular vote. After several tumultuous years of his now 15-year hold on power in Turkey, many are eager to see what his re-election to the presidential role means, especially as the post is now bestowed with more power than any Turkish leader has held since the Republic’s founder, Mustafa Kemal Atatürk. Styled along American lines, the prime ministerial office has been abolished. The president now can appoint his own deputies and judges, which, in a country now lacking in credible checks and balances, offers him almost unparalleled control over Turkey. But what has already changed?

The New Rule of Law

But in its place, a new law has been signed into force. This new ‘anti-terror’ law allows the authorities to detain terror suspects (a term used on a broad swathe of detained persons in Turkey) without charge for up to 4 days. The new law also makes it possible to restrict movement of suspected persons and to dismiss public workers if they are suspected of affiliation with terror groups. On paper, the measures appear comparable to some Western laws. However, the abuse of the Turkish judicial system to try and cleanse Turkish society of any person or organisation even remotely linked to the Gulen group, who is blamed for the 2016 coup attempt, raises fears over how such legislation could be used. The law also enables governors to restrict the right of assembly of citizens. The country’s Constitutional Court has confirmed that all decrees from the emergency rule period are to be considered permanent. This includes laws with questionable links to emergency legislation, such as a law forcing drivers to use winter tires.

On 8 July, just the day before his inauguration as president, Erdoğan sacked some 18,000 state workers as part of the now two-year long purge of suspected putsch sympathisers in Turkey. Soldiers, academics, and police officers were included in this latest round of mass firings. Alongside these massive lay-offs, a TV channel and three newspapers were also closed. This is just the latest attack on the media in Turkey that doesn’t align with AKP, Erdoğan’s Justice and Development Party.

In late July, Turkey’s central bank refused to raise interest rates, despite pressure from the international community to do so to alleviate rising inflation. Prior to the election, Erdoğan repeatedly promised to take over greater control of central bank policy, so the failure to raise rates sparked fears that Erdoğan was following through on this promise. He has called interest rates the “mother and father of all evil”. The Turkish lira promptly lost 3% off the dollar, a reaction from the markets similar to the one they had when his re-election was announced. The Turkish economy is dependent on foreign investors and moves such as this one, which may hold a certain domestic nationalist appeal, are driving away foreign money and sparking fears for the future health of the Turkish economy.

One of the most headline-grabbing moments post-election was the appointment of Erdoğan’s son-in-law, Berat Albayrak, to the post of finance minister. While Albayrak has prior ministerial experience, having served as energy minister before the election, this move seems to confirm the theory of Erdoğan cementing a more dynastic form of governance. Albayrak now sits at the very heart of power in Turkey and is obviously trusted by Erdoğan to wield significant power. From the perspective of outside investors, there was hope that Albayrak might bring a more rational and less political approach to fiscal policy. But after the latest announcement regarding interest rates, such hopes seem naive. He looks set to be a loyal disciple of his father-in-law in the cabinet.

However, concerns have not just been limited to nepotism. A raft of hawks from within the AKP have been offered cabinet positions, worrying some observers in Turkey’s Kurdish community that prospects of a peace deal with the Kurdistan Workers’ Party, or PKK, are slim. Erdoğan has seemed close to a peace deal with the Kurdish insurgents at points during this reign, but the cause of peace has always been a sacrificial lamb to his own ambition. He has been willing to forego peace in the pursuit of electoral domination. The loss of the AKP majority in the June 2015 election was followed by a spike in violence in the war against the PKK, itself followed by a regaining of the AKP majority in November 2015. With this selection of advisors now shaping Kurdish policy in Turkey, it seems unlikely that the solution to the insurgency and ethnic tensions in Turkey’s southeast that the Kurdish community has longed for will be found on Erdoğan’s watch.

After what was viewed as the tightest election in over a decade, relations between President Erdoğan’s AKP and the main opposition party, the CHP (Republican People’s Party), are fraught. Erdoğan has renewed his attacks on the CHP with a ban on opposition politicians attending the funerals of killed soldiers because of the opposition party’s supposed links with PKK terrorists.

Meanwhile, calls have grown for Muharrem İnce, the CHP’s presidential candidate who united hopes among non-AKP supporters of unseating Erdoğan, to challenge for the leadership of the CHP. Since 2010, the party has been led by Kemal Kilicdaroglu who, despite a strong stance against Erdoğan’s mass purges following the 2016 coup attempt, has failed to inspire anywhere near the same public support as İnce did. İnce has so far ruled out a challenge. But that is unlikely to deter the rumour mill from galvanising support for him to continue the resistance against President Erdoğan’s AKP’s growing authoritarianism.

Meanwhile, the former leaders of the pro-Kurdish HDP (Democratic Peoples’ Party), Figen Yüksekdağ and Selahattin Demirtaş, remain in jail accused of terror charges. They were accused of links with Kurdist militants and arrested in 2016. While in prison, Demirtaş “ran” as the presidential candidate for the HDP during the June presidential election.

The diplomatic spat between the US and Turkey over the release of Andrew Brunson, an American pastor imprisoned in Turkey on terror charges, has also recently reignited. The Trump administration has been pushing for his release and a deal with Israel to release a Turkish citizen reportedly was negotiated to ensure Brunson’s release. However Turkey only released him to house arrest, stoking American anger at a time when the US Senate is also considering banning the sale to Turkey of F-35 fighter jets. Erdoğan’s response to the US anger was unequivocal, following the same line of ‘protecting Turkey’s judicial independence’ in not interfering with his sentence. 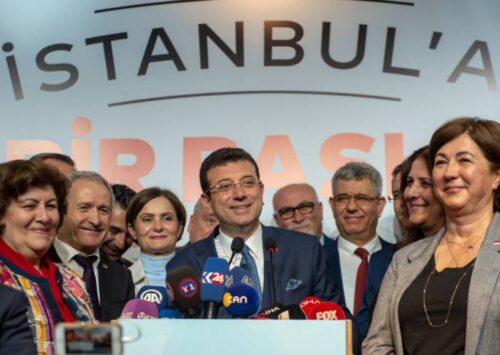 Victory for Turkey’s Opposition in Istanbul, But What Now?
Imamoglu’s win represents a serious blow to the AKP’s electoral dominance in Turkey. However, observers should not m...