On 24 June 2018, Turkey will go to the polls for the first time in over a decade, with the pro-spect of a loss for President Recep Tayyip Erdogan and his Justice and Development Party (AKP) a realistic possibility. Turkey’s opposition remains a mixed bag of leftists, secularists, nationalists and Kurds, but it has banded together in an effort to unseat the man who has dominated Turkish politics since the millennium.

Turkey has grown increasingly polarized in recent years, causing internal tensions but actually largely shoring up Erdogan’s position, as those in his camp attach ever greater importance to his role in protecting Turkey from further violence.

During his nearly 15-year rule, Erdogan has relied on votes from at least half of the country, using economic growth and socially conservative, politically Islamist views to fan support from an electorate that was often sidelined by Turkey’s more secular, Republican politics of past decades. As a result, Erdogan has fomented a deep-rooted opposition amongst leftists, social democrats, liberals, secularists and many minorities.

For much of his presidency, Turkey’s opposition has been divided and weak, only achieving piecemeal victories on an individual level, like the long-awaited entry into parliament of the pro-Kurdish People’s Democratic Party (HDP) in 2015. The opposition failed to exploit the mass Gezi Park protests in 2012, and when given the opportunity to join forces against the AKP in the 2017 constitutional referendum, it was once again unable to put up much resistance (even if the vote was reportedly neither free nor fair).

The June election is the first time since 2003 that the Turkish opposition has banded together to battle the ‘people’s alliance’ formed by the AKP and the Nationalist Movement Party (MHP). Made up of the Republican People’s Party (CHP), the newly formed Iyi (Good) Party, the Felicity Party and the Democrat Party, the bloc will contest the parliamentary vote that accompanies the presidential poll. Crucially, however, the predominantly Kurdish Peoples’ Democratic Party, the second biggest opposition party in parliament, has not been invited to join the bloc. Growing violence with Kurdish militants in Turkey as well as the campaigns against groups in Syria and Iraq allied with the Kurdistan Workers’ Party (PKK) have evidently made an alliance with a Kurdish party too great a risk for the other opposition groups.

In what would be striking for an election in most countries, Selahattin Demirtas, the leader of HDP, Turkey’s third-largest parliamentary party, is contesting the election and presidency from jail. With many Turks unhappy about the mass incarcerations of the past two years, Demirtas’ fate has provoked unexpected cooperation.

In a relatively rare moment of disunity, AKP lawmaker Aziz Babuscu told journalists he thought that Demirtas should be freed, incurring the wrath of Erdogan’s hardline backers. Somewhat surprisingly given her starkly nationalist politics, Iyi Party leader Meral Aksener has also called for Demirtas’ release. She is not a dominant enough force to secure his release and any ensuing gain for the HDP is unlikely to pose a political threat to her own party. However, freeing the Kurdish political champion would pose a serious threat to Erdogan’s hopes of winning or neutralizing the Kurdish vote.

With a press that is a long way from being free and fair, Turkey’s opposition is fighting an uphill battle. Some 90 per cent of Turkey’s media is pro-government. In the first three weeks of May, the two largest broadcasters dedicated 70 hours over coverage to the AKP and MHP. In contrast, the CHP received 22 hours, the Iyi Party 17 minutes and the HDP none at all. The Iyi Party has claimed that it is being deliberately blocked from the airwaves because Erdogan fears Aksener’s appeal.

Compounding this, the state of emergency imposed after the 2016 coup attempt remain in place. In April, widespread sit-in protests were held against the state of emergency, which grants expanded powers to the security authorities. Along with a new voting law that has been accused of facilitating ballot stuffing, intimidating Kurdish voters, and impeding checks and balances, there are very real fears that this election will also be far from free and fair.

Almost as soon as the opposition bloc announced its presidential candidate as Muharrem Ince, a long-time MP and former physics teacher, an image of him drinking an alcoholic drink during the Muslim holy month of Ramadan began to circulate. Despite coming from a pious Muslim family, pro-government voices were quick to challenge his suitability to lead the Muslim nation. Ince struck back, stating the time the photo was different but also saying it was no one’s business anyway, marking out a strident position that will be welcome news to the country’s liberals. However, he will have to ensure that such overtures to Turkey’s secularists does not cost him any potential support from the more conservative and pious Kurdish population.

Problems Unifying the Kurds and the Political Right?

The opposition bloc has shunned a formal alliance in the presidential election but if no one candidate wins a majority initially and the presidential election goes to a second round, voters’ second preferences will determine the winner. In this case, the main opposition alliance will be relying on winning over the Kurdish vote. With Aksener, long a hawkish figure in Turkish politics when it comes to the Kurdish insurgency, leading this bloc, capturing the Kurdish vote may not be simple. That said, Turkey has already seen the opposition engage in some savvy politicking, and if the jailed Demirtas sees the HDP’s best interests served by Erdogan’s fall, then he could rally Turkey’s Kurds under the opposition’s banner. However, no one can say how obedient the Kurds would be to such a call.

Each of the three largest opposition parties is fielding a candidate for the presidential election: Muharrem Ince, Meral Aksener and Selahattin Demirtas. Such a wide field risks splitting the vote and allowing Erdogan to win in the first round, particularly if these three candidates attack each other. As the slim margin of the referendum vote last year (even with widespread allegations of obstructions and fraud) attests, Turkey is split in its support for Erdogan and his plans. Only time will tell if the support for ‘anyone but Erdogan’ has finally reached a critical mass.

Erdogan has shaped Turkey’s governance around his needs and wants. He is used to fighting his own corner, but this unprecedented pressure on his position may push him to adopt ever more extreme tactics to hold onto power. He already controls the press and the judiciary, and has a tight hold on the military, police and intelligence apparatus. Even so, if public declarations of their unhappiness with his rule like the ‘Tamam’ (‘enough’) hashtag – which became a Twitter trending topic in early May – reach the doors of the Presidential Palace, Turkey’s strong-man may feel forced to muscle his way into office again.

Much of Erdogan’s support has been founded on the economic prosperity of the past 15 years. So far, Turkey’s opposition has failed to come up with a viable alternative economic plan. That said, the international concern that Erdogan’s recent proclamations about manipulating interest rates has seemingly given opposition arguments about walking back presidential powers more economic relevance.

Even if polls put Erdogan ahead (although not sufficiently to avoid a second round) in the presidential elections, the parliamentary elections are another matter entirely. These offer the most exciting opportunity since 2002 for Turkey’s opposition parties to unseat the AKP. Until very recently, the prospect of a non-AKP government seemed highly unlikely. Ince’s rousing campaign, Aksener’s tough rhetoric and Demirtas’ talismanic status could finally be enough to change the face – quite literally – of Turkish politics. 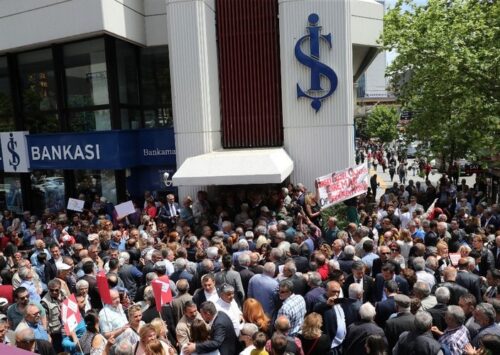 Istanbul’s Mayoral Rerun: Will Everything Be Great?
If the rerun is clouded in the same controversy as the first vote, it will likely be the final nail in the coffin of Tur...