Fanack Home / Turkey / Past to Present / Victory for Turkey’s Opposition in Istanbul, But What Now?

Victory for Turkey’s Opposition in Istanbul, But What Now?

The announcement that Ekrem Imamoglu, the opposition Republican People’s Party (CHP) candidate, had won the Istanbul mayorship on 23 June 2019 came as a shock for many in Turkey. He unseated President Recep Tayyip Erdogan’s Justice and Development Party (AKP) candidate Binali Yildirim not once but twice, after the 31 March vote was annulled and rerun.

The surprise of Imamoglu’s more than 777,000-vote win (up from just 13,700 in the first round) was only compounded by the fact that before the first round, Imamoglu – a former Istanbul local councillor – was virtually unknown in Turkish politics.

The election has been touted by some as a new era in Turkish politics, but with the AKP still the dominant force in the country, caution with such remarks is advised. Even so, the CHP’s win will likely have consequences for years to come.

Above all, it has shown that Erdogan can be fairly beaten at the ballot box. A shrewd politician and veteran drummer-up of popular fear, loyalty and love, Erdogan looked invincible after the broad failure of every protest movement since 2013’s Gezi Park. However, two CHP candidates in national and mayoral elections painted themselves as men of the people and, combined with an ailing economy, tense foreign relations and 15 years of AKP rule, these efforts seem to be gaining traction at the polls. The Istanbul election is far from a national win (and the AKP still won the majority of seats at district level in recent local elections), but the illusion of AKP electoral invulnerability has been quashed.

The fact that the do-over of the March election – widely seen as Ankara’s doing – did not result in victory for the AKP is crucial. After years of increasingly overt electoral tampering, from vote denial and voter suppression to ballot-box stuffing, media suppression and even jailing of opposition politicians, this election appears to have been the final straw. Few imagine that, if faced with future electoral defeat or challenges, Erdogan will not do everything in his power to tip the scales in his favour, but the failure of his efforts this time around may limit such overt political tampering in future.

The CHP’s win was not merely the result of hard work on the ground. Social media played an important role, principally due to the government’s stranglehold on the country’s traditional media. With so little free and independent media in Turkey, Imamoglu embraced social media as his most powerful messaging tool, even livestreaming Ramadan meals that were viewed by hundreds of thousands. His campaign also reportedly adopted the kind of social media data mining that was so important to Donald Trump’s win in 2016 and Brexit the same year. Erdogan has long championed a style of campaigning (and governance) that relies on frequent crowd-stirring rallies, but given this recent loss his party may well become more tech-savvy. However, the seeming  lack of familiarity with tech among the AKP’s top brass, including Yildirim, may require some catching up.

Istanbul is Turkey’s economic heart, as reflected in the municipal budget. With access to some $4 billion, the party that controls the seat has the ability to shape spending to the benefit of its own electoral interests. As a result, Istanbul has been at the epicentre of the AKP’s mega investments, wooing the city’s voters with construction projects, jobs and infrastructure. Now that the CHP controls the coffers, Turkey’s electoral landscape could change dramatically if Imamoglu uses the funds in a similar manner to mayors past. However, with so much infrastructure already built and little interest from foreign investors, this model will be hard to replicate.

Despite this, the patronage potential offered by Istanbul is perhaps best illustrated by how far the AKP has gone to retain it. Even after having annulled the first vote and called another election, according to Imamoglu, the AKP administration that stepped back in after he was removed from office managed to spend a huge portion of the July budget in just one week, presumably to maximize the AKP benefit from the funds in case they lost.

The AKP’s increasing desperation also saw it turn to far more overt forms of patronage. Prior to the 23 June vote, AKP posters went up around Istanbul promising everything from free phone data packages to marriage debt write-offs. Ahead of the local and first-round mayoral elections in March, Erdogan even established subsidized vegetable stalls to counter rising inflation, which many considered a crude ploy to win over voters.

When the AKP did not sweep the board in March, the stalls quickly disappeared, and despite more promises, the AKP still lost the Istanbul rerun. Unless the AKP refuses to learn from these defeats, future elections may not see the return of such tactics.

A test of power

Along with the Ankara mayorship, this is the first real hold on power that the CHP has enjoyed for years. While the party has long been an establishment choice, it is now firmly considered as the opposition, and this generation of the party lacks governing experience and a record in power. Imamoglu’s win, which captivated voters across the country, presents the CHP with a chance to show how it will govern and what benefits it can bring to the Turkish people. With his newfound profile and two-time victory over Erdogan’s candidate, many will be looking to Imamoglu as a future challenger for the presidency. His an-swer to the question of whether he will run has so far been “God knows”.

Erdogan will not make things easy for him. His power has already been curtailed, and he faces a centralized, strong-man government not afraid to bend or break rules or skew the political landscape to ensure its survival. Furthermore, Imamoglu has already run afoul of one AKP-aligned governor – the two reportedly got into a public argument that Erdogan demanded Imamoglu apologize for. Such incidents give Ankara more ammunition to pursue Istanbul’s mayor if they wish. Imamoglu may need more allies to survive unscathed.

Overall, Imamoglu’s win represents a serious blow to the AKP’s electoral dominance in Turkey. However, observers should not mistake it for a fatal one. The party still commands powerful support across the country, even if it has lost the two largest cities. And although the first cracks seem to have appeared in Erdogan’s political base, it will not be until the next general election in 2023 – the centenary of the Turkish Republic – that the most pivotal consequence of this election will become evident: a CHP victory at the national level. 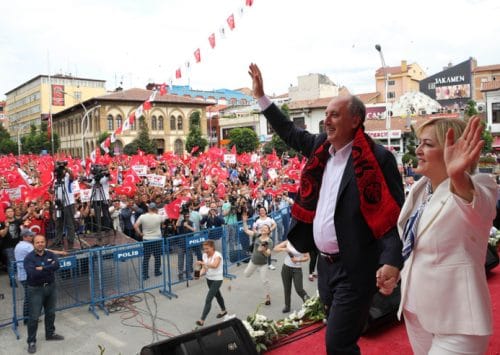 Turkey’s Opposition: Underdogs United
Even if polls put Erdogan ahead (although not sufficiently to avoid a second round) in the presidential elections, the p...