On 27 May 2019, the Turkish army launched a military operation against the Kurdistan Workers’ Party (PKK) in the Hakurk area in northern Iraq. It was not just an air operation for a change but a seemingly limited ground operation as well, with soldiers dropped in the rugged mountains from helicopters.

The lawyers’ visit to Imrali, the prison island in the Marmara Sea south of Istanbul where Ocalan has been imprisoned since his capture in 1999, elicited a sigh of relief from the Kurdish political movement. Since November 2018, an increasing number of Kurdish political prisoners have been on a hunger strike with a single demand: to break their leader’s isolation. The 22 May visit was the second that month, and therefore the strikers’ goal had been reached. It was just in time because the health of many of the inmates was deteriorating.

Four days after the visit the lawyers gave a press conference, at which they said that Ocalan wanted the hunger strike to end. They used the intervening days to consult with a range of stakeholders on the issue: they held talks with the Peoples’ Democratic Party (HDP), a leftist party rooted in the Kurdish political movement, with the PKK field leadership in the Qandil mountains in northern Iraq and with representatives of those on hunger strike in prison. Leyla Guven, an HDP MP, was the most important hunger striker that Ocalan’s lawyers talked to. She initiated the hunger strike in early November 2018, when she was still imprisoned on vague terrorism charges. She was released in January 2019. Immediately after the press conference, Guven declared she would resume eating. She was soon followed by the hunger strikers in prison – no less than 3,000 people in as many as 92 jails all over Turkey.

One sentence in the press conference did not get much attention, although it was important. The lawyers said: “As he did during the previous meeting, Mr. Ocalan reminded [us] that the permission to have these meetings did not mean the presence of a negotiation process.” In other words, the peace process between the Turkish state and the PKK, which ended after two years in the spring of 2015, has not re-started. It is not that easy. After the previous process broke down, the co-leadership of the Kurdistan Communities Union (KCK) – the Kurdish umbrella organization under which the PKK resides – made clear that a few basic conditions have to be met before that can happen: a mutual ceasefire, a genuine interest in solving the Kurdish issue and a third party to oversee the process.

There have been no indications from the Turkish state that it is prepared to negotiate. Kurdish activists continue to be detained, the war rhetoric has not subsided and important Kurdish political leaders – besides Ocalan – are still behind bars, with no end to their incarceration in sight.

One of the questions that has been raised about the seemingly contradictory developments – namely, giving the Kurds access to their leader while launching a military operation in PKK territory – is to what extent they were triggered by the elections. On 31 March, local elections were held in Turkey, in which President Recep Tayyip Erdogan’s Justice and Development Party (AKP) was dealt quite a blow. The AKP candidates lost to the candidates of the opposition Republican People’s Party (CHP) in several important cities, including the capital Ankara and Istanbul. The AKP refused to accept the Istanbul defeat and lodged a complaint with the High Election Board. The board eventually gave in to the government’s pressure and announced new elections for the city on 23 June.

The Kurds were crucial in the March election results and they will be again in Istanbul in June. The HDP decided not to run its own candidates in March but instead called on its supporters to vote for the opposition, which they did. If Erdogan manages to break this occasional alliance between the CHP and HDP, he may be able to tip CHP candidate Ekrem Imamoglu’s small margin in favour of the AKP’s Binali Yildirim.

Will breaking Ocalan’s isolation do the trick? Not in the sense that HDP supporters will suddenly vote for the AKP’s candidate. But they could feel less compelled to vote at all, which would negatively impact the CHP. It could also be that Erdogan was trying to trigger a reaction from Imamoglu. Agreeing with the end of Ocalan’s isolation could anger CHP voters, disagreeing could estrange the Kurds who voted for him. Imamoglu decided not to react at all, instead focusing on issues like rising prices, unemployment and transportation costs, and stuck to his message of cohesion between the city’s different groups.

The recent military operation ended the suspicion that Erdogan was trying to win over Kurdish voters, although it may still be linked to the elections. The hardliners of the Nationalist Movement Party (MHP), who have been in a coalition with the AKP for some time, do not support any rapprochement with the PKK. Appearing to be tough on the ‘separatist terrorist organization’, as the PKK is usually referred to in Turkey, may encourage nationalists to vote for Yildirim despite Ocalan’s recent access to his lawyers.

The operation to “once and for all eliminate” the PKK from “the borders, the country and the region” is well underway, according to Defence Minister Hulusi Akar. However, the chance that Turkey will get the job done this time around seems small. If the mountains, where the PKK has had its camps since the early 1990s, were easy to access and the Turkish army could beat the PKK in its natural habitat, it would have done so long ago. Even Erdogan knows that the conflict cannot be solved militarily and that the place to solve it is not in the mountains but at the negotiating table.

Yet if Erdogan is apparently unwilling to talk to the PKK and the wider Kurdish movement, then why break Ocalan’s isolation? Firstly, it would not look good if hunger strikers died between now and the elections. Secondly, videos that have surfaced showing security forces manhandling, sometimes violently, street protests led by the mothers of striking inmates also do not weigh in Erdogan’s favour in a country where mothers are close to sacred.

Thirdly, and most importantly, it looks like Erdogan needs Ocalan’s contribution to a solution he is trying to find for the deadlock in Syria. In the north and north-east of the country, the People’s Protection Units (YPG), Kurdish armed forces who also consider Ocalan to be their leader, are in charge. Erdogan, who considers them terrorists, does not want them on his border or holding any power in Syria. He wants to take over their territory or at least establish a zone under his influence, which he cannot do because there is still an American military presence there. If he attacks the YPG, he will clash with the United States’ (US) army, something that is out of the question between two NATO allies.

A positive role for Ocalan

Recently, it became clear that contact had been established between Turkey, more specifically its intelligence agency MIT, and the YPG, under pressure from the US. The YPG has repeatedly said it will not accept a Turkish presence in Syria. Ocalan – who was reportedly also visited by MIT – stated that he is willing to play ‘a positive role’ in solving Syria’s problems. In a statement issued after the first lawyers’ visit on 2 May, he even declared that ‘Turkish sensitivities’ have to be taken into account in Syria.

An isolated Ocalan cannot play any role, a situation that Erdogan had to rectify. The fact that prisoners are unlikely to die of hunger and protesting mothers will no longer be beaten up could be nothing more than collateral gain. Whether Ocalan can really help to break the deadlock in Syria to Erdogan’s satisfaction remains to be seen. 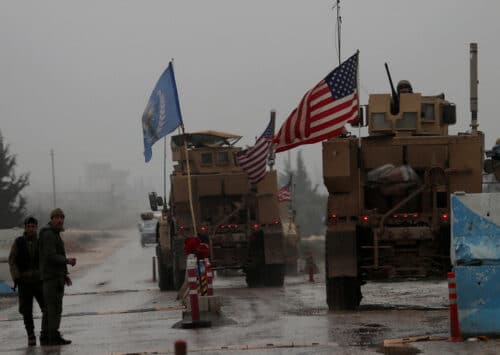 OZAN KOSE ©AFP
OZAN KOSE ©AFP
"Ignorance leads to fear, fear leads to hatred, and hatred leads to violence.
This is the equation."
IBN RUSHD/AVERROES (1126 – 1198)
We are a Dutch not for profit organisation (NGO), financed solely by individuals who share our belief in the importance of publishing and disseminating reliable, unbiased information on the Middle East & North Africa region. To represent the voice of the region’s people, we carefully echo the region’s heartbeat by offering fact-checked and therefore credible information.
Your support is greatly appreciated and helpful!
Donate