In a country that has been the scene of many socio-economic and political changes in the past several decades, it is difficult to provide benchmarks for ‘popular culture’. From the appearance of recording studios in the 1950s to the explosion of television channels from 1990 to 2000, the notion of popular culture has nearly lost its meaning. Bard festivals have disappeared, as have traditional performances, such as those of Karagöz and Hacivat, the lead characters of the shadow plays that were especially popular during Ramadan but ceased to be ‘popular’ and instead became ‘elitist’ and required significant public subsidies for their maintenance. The same is true of the rich heritage of popular dance; folk dance is repressed by the government or highly politicized by the left- and right-wing parties, the Alevi movement, or Kurdish organizations.

There are three additional registers in present-day popular culture: classic songs performed in a pop style (as by the famous Zeki Müren, 1931-1996); the arabesque, which has been the most common music since the 1960s, performed by singers such as İbrahim Tatlıses (born 1952) and Ferdi Tayfur (born 1945); and television series. Most TV series are soap operas, in which the transgression of moral standards – from demonstrations of homosexuality, to extramarital relationships or adultery – is allowed. They adapted the Brazilian telenovelas of the 1990s with great success, particularly in the Arab world and the Balkans. There are also highly politicized series, such as the famous Valley of the Wolves, an ultranationalist and anti-Semitic series featuring men working behind the scenes and undercover for ‘the country and the nation’ in the war against internal enemies (e.g., the Kurdish movement, minorities, and ‘traitor’ politicians) or foreign enemies (the United States, Israel). 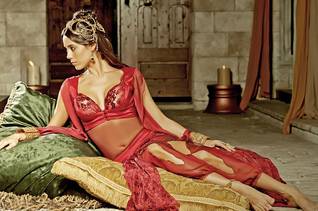