The high percentage of people in the 0-24 age group makes education an important political, social, cultural, and economic issue. The basic data on nursery school (non-compulsory), primary school, and first year of secondary school (compulsory) are as follows:

These figures show clearly the imbalance between the resources allocated to nursery schools (usually private) and other schools. There are also 3,357 high schools (3,837,164 students) and 4,193 cram schools, or dershaneler (up from 1,864 in 2001), which are private institutions constituting a veritable industry and generating a total turnover of USD 9.3 billion per year. Also important are the 139 universities (94 public and 45 private, called ‘foundations’) attended by 2,532,384 students (of whom 1,090,900 are women) and in which 100,000 university lecturers (including 13,622 professors and 7,360 docents, i.e., assistant professors) teach. The YÖK (Yüksek Öğretim Kurulu, Higher Education Council) , which has close links with the central government, plays a decisive role in the management of the universities.

Post-Kemalist Turkey was and remains the scene of a religious war between the conservative parties and the Kemalist camp, even though both agree on the importance of Turkish nationalism at all levels of education. From 1950 to 1990, the main educational issues were the preparation of the religious education curriculum for non-religious schools and the establishment of schools for training imams and preachers (imam hatip schools). These have often led to conflicts between the military and civil governments. The penultimate battle occurred under the Islamist government of Necmettin Erbakan, when the National Security Council, which was the main military body, imposed compulsory education for an uninterrupted period of eight years, thus preventing access to the imam hatip schools, whose diplomas were no longer legally equivalent to other national diplomas. The response came fifteen years later in 2012, when the government of Erdoğan adopted the 4+4+4 system ( four years of primary education at the first level, four years of primary education at the second level, and four years of secondary education), which allows children easy access to imam hatip schools and to an equivalent diploma. These secondary-education institutions, which have graduated around 1,500,000 students over five decades, enrolled 290,000 students in 2011-2012.

The majority of the education system is public, but a large part of it is now run by the private sector, whether in the form of elite institutions at all levels (5,269 institutions) or within the school network of the Fethullah Gülen religious community. Under the military regime of 1980-1983, universities were also partly privatized. While the number of public universities grew significantly, 45 private universities opened their doors, many of which, such as Bilgi and Sabancı, highly integrated into global networks, have played a leading role in the development of social sciences in Turkey over the last twenty years. 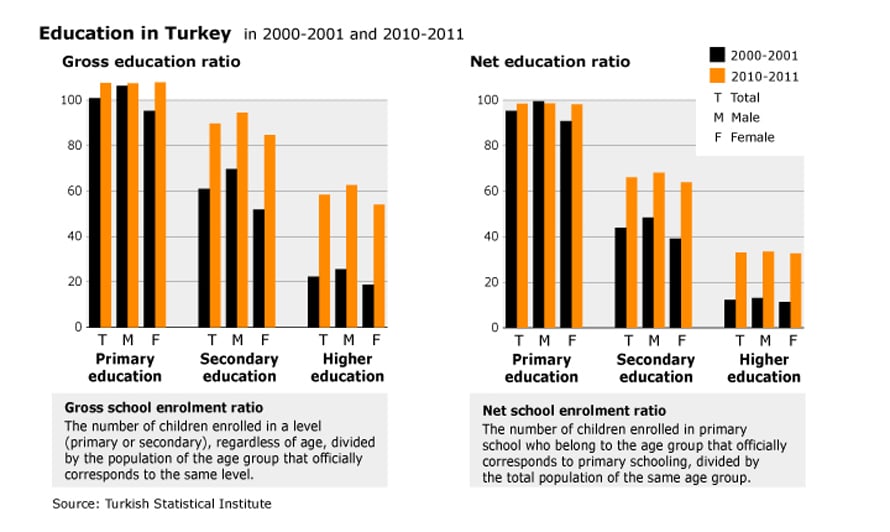 Oleg Kozlov ©Shutterstock
Oleg Kozlov ©Shutterstock
©Fanack
"Ignorance leads to fear, fear leads to hatred, and hatred leads to violence.
This is the equation."
IBN RUSHD/AVERROES (1126 – 1198)
We are a Dutch not for profit organisation (NGO), financed solely by individuals who share our belief in the importance of publishing and disseminating reliable, unbiased information on the Middle East & North Africa region. To represent the voice of the region’s people, we carefully echo the region’s heartbeat by offering fact-checked and therefore credible information.
Your support is greatly appreciated and helpful!
Donate