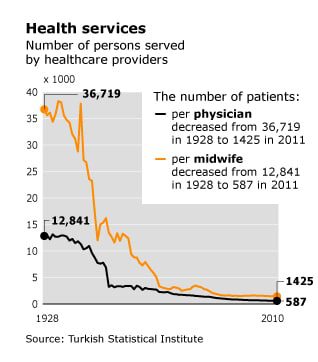 Two figures show the opposing trends observed in the health sector in Turkey: while life expectancy increased from just over 44 years in 1960 to 68.5 years in 2000 and 72.5 years in 2011 (70.61 for men and 74.49 for women), the infant mortality rate, although declining, remains one of the highest in the world: 18 per thousand and 100 per thousand in the western and eastern parts of the country, respectively. Preventive medicine has emerged only in the last fifteen or twenty years. According to the Ministry of Health, Turkey had one doctor and 1.3 nurses per 1,000 inhabitants (compared with 3.3 and 9.8, respectively, in the European Union) in 2011; its hospital capacity was only 2.3 beds per 1,000 inhabitants (5.7 in the EU); and it spent euros 671 per capita for health (euros 2,192 in Europe). Health expenses consumed 5.6% percent of GDP, as compared to an average of 8.3 percent in Europe. These macroeconomic data and the existence of a system for the protection of wage earners and contributors cannot conceal the difficulties faced by a population group in accessing medical care. Of the 1,439 hospitals (including 42 military hospitals) in the country, 490 are private, but they account for 75 percent of the total expenses in the health sector. The maternal mortality rate per 100,000 live births is 16 across Turkey but is 22.6 in the Southern Anatolia region, 22.9 in the Black Sea region, and at least 26.1 in the Central Anatolia region. Another indication of the impact of these inequalities is that the population over 65 years is 7.09% percent of the total population but only 4.9 percent of the population in the South-Eastern Anatolia region and 4 percent in the Central Anatolia region. 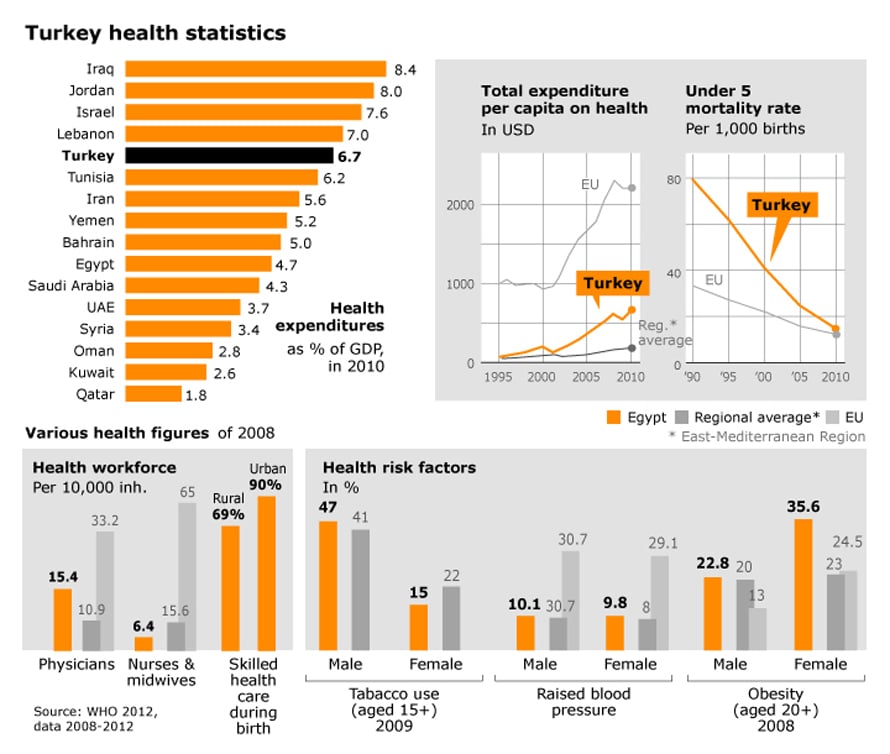