A regional and global player

The formation of the federal union in 1971 marked the beginning of the rise of the UAE as a new regional and global power, dominated by the rich emirates of Dubai and Abu Dhabi and characterized by incredible material and social growth under the forces of a free-market economy and globalization.

In the Arab Gulf region and the broader Arab world, the UAE has sought to enhance cooperation and resolve disagreements through dialogue. One of the central features of the country’s foreign policy has thus been the development of closer ties with its neighbours in the Arabian Peninsula. The Gulf Cooperation Council (GCC), which includes the UAE, Kuwait, Saudi Arabia, Bahrain, Qatar, and Oman, was founded at a summit conference held in Abu Dhabi in May 1981 and has since become, with strong UAE support, an effective and widely respected regional grouping. The Council coordinates and cooperates on economic, political, and security matters. A split recently emerged between the UAE and Saudi Arabia over the common currency proposed by the central bank of the GCC, prompting the UAE to withdraw from the monetary union soon after it was announced that it was to be headquartered in Riyadh. The UAE is also a member of the Greater Arab Free Trade Area (GAFTA) and the Arab League, organizations less effective and less integrative than the GCC.

The policy of the UAE is moderate and Western-leaning. UAE also has significant commercial relations with non-Western economies such as China. The UAE continues to believe that the restoration of security, peace, and stability in the region, as well as normalization of relations between all countries, including Israel, cannot be achieved while Israeli occupation of the Palestinian and Arab territories continues. The UAE strongly supports an end to the Israeli occupation and establishment of an independent Palestinian state, with East Jerusalem as its capital, within the context of a lasting peace-agreement based on the Arab Peace Initiative of 2002.

Internationally, the UAE has been active in promoting peacekeeping and has been a generous contributor of humanitarian aid. In 1974 Sheikh Zayed allocated a substantial percentage of Abu Dhabi’s income as aid to Arab, Islamic, and developing countries. 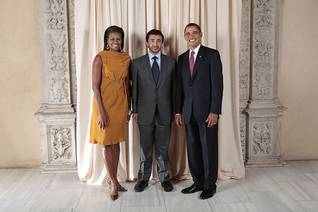 Foreign relations
The UAE is a member of the United Nations and the Arab League and has established diplomatic relations with more than 60...