The UAE is a member of the United Nations and the Arab League and has established diplomatic relations with more than 60 countries, including the US, Japan, Russia, the People’s Republic of China, and most West European countries. The country plays a moderate and pragmatic role in the Organization of Petroleum Exporting Countries (OPEC), the Organization of Arab Petroleum Exporting Countries (OAPEC), the United Nations, and the Gulf Cooperation Council. Development assistance given by the UAE to other countries has increased the country’s stature and influence. In 2007, the UAE pledged and delivered USD 300 million to Lebanon. The UAE has provided significant monetary and material support to the Iraqi government, including a pledge of USD 215 million in economic and reconstruction assistance, and has provided substantial aid to Afghanistan, Pakistan, and the Palestinian National Authority.

Relations with the US

The UAE and the United States have had friendly relations since 1971. The United States was the third country to establish formal diplomatic relations with the UAE and has had an ambassador in the UAE since 1974. Political cooperation, security coordination, and commercial ties, especially in the petroleum sector, have developed into friendly political and economic ties. The UAE is the United States’ single largest export market in the Middle East and North Africa, with USD 14.4 billion in exports in 2008 and more than 750 US firms operating in the country. There are nearly 50 weekly non-stop flights to the UAE from six US cities. UAE ports host more US Navy ships than any other port outside the United States.

The UAE has maintained close strategic, political, and economic relations with Western countries. It has signed several military deals with the West, including defence agreements with the United States in 1994 and France in 1995. After the 11 September 2001 attacks on the US, the UAE was identified as a major financial centre used by al-Qaeda in transferring money to the hijackers, and two of the 9/11 hijackers were UAE citizens. The nation tried to erase this stigma by cooperating fully with the US, including freezing accounts tied to suspected terrorists, clamping down on money laundering, and, most recently, downgrading its cooperation with Iran and applying the sanctions regime approved by the UN. One analyst believes that Abu Dhabi’s financial bail-out of Dubai was done in exchange for Dubai’s accommodation of Abu Dhabi’s more aggressive approach towards Iran.

The UAE sent forces to help liberate Kuwait during the 1990-1991 Kuwait Crisis that followed the Iraqi invasion and occupation of Kuwait. When the massive coalition ground assault called Operation Desert Storm began on 24 February 1991, troops of the Gulf States, including some from the UAE, formed part of two Arab task forces. The UAE contributed to the war by billeting American and French forces and providing naval facilities; UAE forces suffered some casualties. The UAE also underwrote USD 3 billion of the cost of the war.

The UAE military is one of only two Muslim or Arab participants (along with Jordan) that joined the International Security Assistance Force (ISAF) in Afghanistan, alongside troops from 12 other non-NATO nations. It has also maintained a military unit as part of the UN mission to Bosnia for years. Well aware of the limitations of the use of military force in the Afghan situation, the UAE believes the country needs investment to encourage economic development and social security.

UAE troops have also participated in peacekeeping and humanitarian missions in Somalia, Lebanon, Bosnia, Albania, Kosovo, Kuwait, Pakistan, and Afghanistan, among other places. 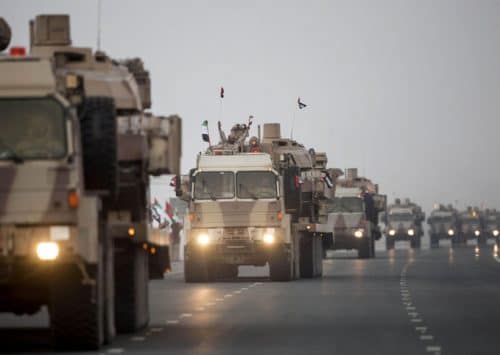