The Imperial Agenda of the United Arab Emirates (UAE)

Once a country that relied on soft power, the UAE is now reshaping the Middle East and beyond. Mohammed bin Zayed, the crown prince of Abu Dhabi, who is commonly referred to by his initials MBZ, is setting the agenda.

Though MBZ has called the shots for years, he previously treaded carefully so as not to upset the nominal ruler of the UAE and Emir of Abu Dhabi Sheikh Khalifa bin Zayed Al Nahyan . However, MBZ’s cautious approach changed just months after Al Nahyan suffered a stroke in January 2014.

Since then, MBZ has elevated members of his family and inner circle to key economic and security positions, effectively asserting complete control over the country and its vision for the region.

MBZ’s chief concerns are limiting the influence of Iran and eradicating the Muslim Brotherhood, a group that the UAE designated as a terrorist group in November 2014.

The UAE’s hostile stance towards Qatar is closely related to MBZ’s second objective. Both countries, argues Mehran Kamrava, a Professor of Middle Eastern Studies at Georgetown University in Qatar, are against granting political and civil freedoms to their citizens. Yet while Qatar co-opts and supports Islamists, the UAE has chosen to crack down on perceived sympathizers of the Brotherhood.

This difference has spawned an archrivalry between the two countries, much to America’s dismay. Tensions between the US and UAE flared after American intelligence officials said that the UAE hacked the Qatari government’s website to make it seem that Qatar was praising Iran, Hezbollah, Hamas and Israel. The move provided the UAE with the pretext to rally its allies Saudi Arabia, Egypt and Bahrain to blockade Qatar for publicly “endorsing” the Gulf Cooperation Council’s (GCC) main adversaries.

Although the White House was thrust into the uncomfortable role of mediator between its Gulf allies, US and Emirati interests had remained closely aligned when it came to most other issues in the region. That relationship, however, is now being tested thanks to the UAE’s increasingly independent foreign policy.

Libya is just one area of contention. The UAE has fully supported strongman Khalifa Haftar, who has publicly declared his intention of cleansing Libya of Islamists. Under the Obama administration, US officials believed that the UAE’s policies were undermining UN-led peace efforts in the fractured country. “The danger of creating an independent military capability is that you create an independent military capability,” a former senior U.S. official told The Washington Post. “It’s great that we have a partner in the Emiratis, but we don’t always see eye to eye.”

On other issues, the two countries are in complete agreement. The UAE, for instance, is a primary ally in the American-backed, Saudi-led coalition in Yemen. The coalition’s objective is to dislodge the Houthis rebels, who are increasingly receiving support from Iran, from the Yemeni capital Sanaa and restore the internationally-recognized government of President Abd Rabbu Mansour Hadi.

The UAE and US are also cooperating to wage a counterinsurgency against Al-Qaida in southern Yemen. A 2017 investigation by the Associated Press (AP) revealed that the Emirates were holding suspects in secret prisons where torture and abuse was rife. US forces were allegedly present in at least one of the facilities, witnesses told AP.

A former Pentagon official who now teaches law at New York University, Ryan Goodman, notes that the US could be complicit in war crimes due to its close cooperation with the UAE in southern Yemen.

“The revelations of the UAE detainee abuse should be especially concerning for the US and other international supporters,” wrote Goodman and Columbia law school professor Alex Moorehead. “It further heightens the legal risk for governments, and their officials personally, and involves the US in a range of harmful and counterproductive practices that threaten to alienate the local Yemeni population.”

The UAE has also been supporting southern separatists in Yemen who are clashing with Saudi-backed forces. It has also supported fighters against Islah, which is the Muslim Brotherhood affiliate in Yemen and another key player in Saudi Arabia’s war against the Houthis.

Despite the increasingly diverging interests with the US, UAE officials maintain that their country is a force for stability in the Middle East. That’s the line pandered by the UAE’s Ambassador to Washington, Yousef Al Otaiba, who has grown close with US policymakers in the Trump administration, including the president’s son-in-law and adviser Jared Kushnertr.

“It really has to do with geography and the threats we grew up with from day one,” Al Otaiba told The Washington Post, defending the UAE’s aggressive agenda and budding military capacity in the region.

The UAE’s campaign against perceived Iranian expansion and political Islamists has stretched into the Horn of Africa, where the Emirates are competing with Qatar for diplomatic, military and commercial ties. The UAE had managed to achieve heavy influence in Djibouti, the self-declared republic of Somaliland, as well as the Somali region of Puntland. However, the UAE’s relationship with Djibouti now seems irrecoverable following the latter’s cancellation of a 30-year contract with a Dubai shipping firm in February 2018. The contract was supposed to permit the firm to manage a major container facility located along the Red Sea and Gulf of Aden.

Besides the commercial interests it is pursuing in the Horn of Africa, the UAE is also establishing military bases to aid in their operations in Yemen and offset Iranian expansion. But this growing involvement arisksrisks deepening existing divisions and igniting conflicts in the region. Timothy Williams, an analyst for defence think-tank Royal United Services Institute (RUSI) in London, specifically warns that the UAE’s military cooperation with Eritrea could strain the latter’s already fragile relationship with Ethiopia and Sudan. That doesn’t seem to matter to the Emiratis, who are more concerned with exceeding the influence of Qatar and Iran at all costs. 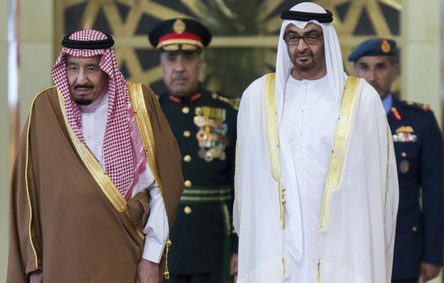