The UAE Expands Military Influence in the Middle East and Beyond

The United Arab Emirates (UAE) has become a major military player in the Middle East thanks to Crown Prince Mohamed bin Zayed al-Nahyan. Over the last 30 years, he has made it his mission to expand the UAE’s army in order to secure the Gulf kingdom’s interests in the region.

Hussein Ibish, a senior resident scholar at the Arab Gulf States Institute in Washington DC, noted that the Iraqi invasion of Kuwait in 1991 is what first compelled Abu Dhabi to upgrade its military. Prior to that, the ruling family supported former Iraqi dictator Saddam Hussein during his country’s nearly decade-long war with Iran.

The tiny kingdom of just 10 million people now has the 60th strongest army in the world, according to the Global Firepower Index, which ranks the military prowess of 133 countries. It is on course to move up the index in the coming years. In 2013, the UAE had the 15th highest military expenditure of any country in the world, according to the Stockholm International Peace Research Institute.

Even more telling, it has doubled its military spending in the last ten years, investing more than $14 billion. Among oil-rich Gulf states, only Saudi Arabia has a larger defence budget. The Emiratis have also instituted obligatory military service while deploying their troops in several regional conflicts.

During the Arab Spring in 2011, the UAE first sent troops to Bahrain as part of a larger GCC campaign to help crush a democratic uprising. That same year, it participated in the international coalition that toppled former Libyan dictator Muammar Qaddafi.

Three years later, it joined the US-led campaign against the Islamic State in Iraq and Syria (ISIS). In 2014, the Washington Post reported that, after the United States, the UAE carried out more attacks than any other country involved in the campaign.

The kingdom has also allowed the United States to launch attacks from its base in al-Dhafra. Once US fighter jets take off from the base, many are accompanied by planes operated by UAE’s air force. The ongoing cooperation points to an increasingly friendly alliance between the two nations.

Anthony Zinni, a former commander of US forces in the Middle East, argued that the UAE is now America’s strongest Arab ally in the region. Yet the UAE is not only willing to do what is asked of it. It is actively trying to play a leading military role in conflicts where its interests are at stake.

In 2016, Emirati officials said they were willing to supply ground troops to Syria to defeat IS. The UAE has long been a staunch opponent of Islamist movements in the region, which also accounts for the attacks it carried out against jihadist militias in Libya.

Meanwhile, it is one of the most active arms exporters in the Middle East. In December 2014, it established the Emirates Defence Industries Company (EDIC), which describes itself as ‘the region’s premier integrated national defence services and manufacturing platform’.

In addition to signalling the UAE’s readiness to become a major arms player, the EDIC has fulfil another purpose; it has bolstered the UAE’s own army while diversifying the country’s economy. Since 2015, the UAE has been fighting alongside the Saudi-led coalition in Yemen, which has served as its laboratory to test new weapons.

Zoe Stanley Lockman, a defence data research assistant at the European Union Institute for Security Studies (EUISS), said that the UAE has reportedly deployed land vehicles such as armed personnel carriers to monitor its performance in the war.

The Saudi-led coalition has been largely responsible for causing one of the worst humanitarian crises in recent years. More than 10,000 people have died and 40,000 have been wounded, according to the United Nations. The conflict has caused widespread famine and a deadly choler a outbreak, adding to the human suffering.

The UAE’s interference has nonetheless succeeded in weakening Houthi rebels in the east of the country, despite it losing scores of soldiers to a Houthi missile attack two years ago.

That was when the kingdom elected to train and unite Yemen’s army rather than spearhead the fight from the frontlines. However, Emirati officials say that tribal divisions have made it nearly impossible to build a national force. “In Yemen, a Hadrami will fight only with another Hadrami. It is important to keep it in regional blocs when you build battalions,” a senior UAE military official, speaking on condition of anonymity, told Reuters.

Al-Qaeda militants and ISIS are exploiting the chaos. Worse still, the UAE’s counter-insurgency response has resulted in the torture and disappearance of hundreds of Yeminis.

In June 2017, the Associated Press (AP) published an investigative report alleging the UAE’s role in these atrocities, as a part of the US-led hunt for al-Qaeda militants. The clandestine network is run by the UAE and Yemini forces. It reportedly consists of 18 hidden military bases that are tucked away in the basements of private villas and a night club. Forced disappearances and torture are war crimes under international law. “We could hear the screams,” a former detainee held for six months in Riyan told AP. “The entire place is gripped by fear. Almost everyone is sick, the rest are near death. Anyone who complains heads directly to the torture chamber.”

Mercenaries are a major part of the UAE’s arsenal. At least 450 ex-military fighters from Colombia were dispatched to southern Yemen in 2015. Most of them were recruited for their ample experience fighting a counter-insurgency in their own country. The Economist revealed that the fighters were trained for five years at Zayed Military City, in the desert in Abu Dhabi.

Ibish, the expert from the Arab Gulf States Institute, suggested that the use of mercenaries highlights a larger problem for the UAE, which is its ongoing struggle to recruit enough soldiers to fight alongside its small population.

Sudanese and Eritreans have also been hired to fight in the war. This is unsurprising, given that the UAE is already expanding its military presence beyond the Middle East. In 2015, the UAE established a military base in the Eritrean port city of Assab to target Houthi rebels. The base angered Ethiopia, which fought a brutal war with Eritrea from 1998 to 2000.

In February 2017, the UAE established another base in the port of Berbera in Somaliland. The BBC suggested that the base aims to protect the shipping interests of the GCC in the Red Sea and Gulf of Aden.

Most observers agree that the tiny kingdom is building up its army to continue to offset the influence of Iran while acting as a bulwark against Islamist and jihadist insurgents. But Ibish suggests that the UAE’s more weaponized approach to politics is part of a wider ambition to determine its own fate in a region that has become increasingly destabilized since the Arab Spring. 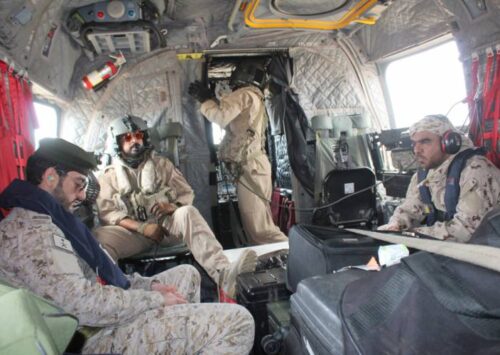 The UAE’s Withdrawal From Yemen is Strategic in Every Way
While the decision of the UAE to reduce its troops presence in Yemen is a notable turn in the four-year conflict, the UA...