Fanack Home / United Arab Emirates / Past to Present / UAE and the Muslim Brotherhood: A Story of Rivalry and Hatred

UAE and the Muslim Brotherhood: A Story of Rivalry and Hatred

For more than two decades, the United Arab Emirates (UAE) has been at the forefront of the fight against all forms of what is usually referred to as political Islam in the Gulf and beyond. The Muslim Brotherhood, which is the most obvious manifestation of Islamic activism, has been its primary target.

However, the relationship between the Muslim Brotherhood and the ruling families of the seven Emirates, including the most powerful of the families, the al-Nahyan of Abu Dhabi, was relatively amicable during its beginnings more than 40 years ago.

Like other Gulf states during the 1950s and 1960s, the UAE imported large numbers of professionals from other parts of the Arab world, notably Egypt, Syria, Jordan and Palestine. The most important sector was education, for which many qualified teachers were needed for the thousands of pupils and students. Some of these Arab expatriates came with intellectual baggage, some were nationalists (Nasserists or Baathists), whereas others were Islamists (mostly affiliates of the Muslim Brotherhood but also of Hizb ut-Tahrir). With their presence, these expatriates sought to influence their students and the other nationals with whom they interacted.

Soon after independence in 1971, the earliest cohorts of students who had spent time studying in Egypt and Kuwait returned to the UAE. It was during their time in these countries that the young men had become more closely acquainted with the Muslim Brotherhood and its ideology. In 1974, a group of them founded Jamiat al-Islah (‘reform society’), following the example of the Muslim Brotherhood in Kuwait, which was a pioneer in Islamic activism in the Gulf.

Throughout the 1970s, ideological groups of varied convictions were not only active but permitted and encouraged. They were quick to make use of a new law that allowed and regulated the establishment of social, cultural, media and sports organizations. All groups benefited from the fairly tolerant environment. One of these early organizations was the Student Union. Although it was initially founded by nationalists and Nasserists, Islamist students won the election for its leadership in 1981 and have dominated it ever since.

Following their victory, the Islamist students were invited for an audience with UAE President Sheikh Zayed al-Nahyan. The group included a young man called Sultan bin Kayed al-Qasimi, a member of the Ras al-Khaimah emirate’s ruling family and later the head of the country’s Islamic movement. (Al-Qasimi was arrested in April 2012 and is currently serving a prison sentence for his affiliation with the Muslim Brotherhood). Although the Student Union was not regarded as a legal entity, it was recognized and welcomed by the president. Throughout that period, affiliates of the Islamic movement were unrestricted in their social and cultural activities, organizing youth camps and scouts’ outings in the desert as and when they wished.

In the 1980s, the UAE reorganized its national security agency. A former Egyptian security officer, Fuad Allam, who was known for his deep hostility towards and contempt of the Muslim Brotherhood, was recruited from Egypt and put in charge of the process. Allam was accused by many members of the Egyptian Muslim Brotherhood of personally torturing them during interrogation in the Nasser era. This coincided with a fierce competition at the cultural, intellectual and political levels between the Islamists on the one hand and the nationalists and Nasserists on the other.

By the late 1980s, the UAE authorities, especially in Abu Dhabi, had become increasingly suspicious of the Islamic trend, which they perceived as a potential threat. These fears were fanned by opponents of the trend, some of whom occupied senior positions in various public sector departments.

The honeymoon the Islamists enjoyed under Sheikh Zayed al-Nahyan came to an end in 1987. Sheikh Zayed’s third son, Muhammad bin Zayed, emerged as an influential figure with ambitions to beat his two older brothers to the throne. It is believed that Bin Zayed was personally tutored by individuals who held a deep grudge against the Muslim Brotherhood.

The same year, Bin Zayed tried to unseat the ruler of Sharjah, the third-ranking emirate in the federation. Sharjah’s ruler, Sheikh Sultan al-Qasimi, had been an outspoken critic of some of the policies adopted by the central government in Abu Dhabi. His decision to ban alcoholic drinks in his emirate in 1985 was seen as a coup for the Islamists and one that potentially portrayed Abu Dhabi as un-Islamic. Bin Zayed wanted to replace him with his brother Abd al-Aziz, but Dubai objected and the plan was thwarted in a matter of days. Bin Zayed also suspected that the Islamists in the UAE had sided with Sharjah’s ruler.

Guided and advised by former Egyptian security officers, Bin Zayed took charge of the UAE security agency in the early 1990s, a development that proved to be particularly detrimental to the Islamists.

Throughout the 1990s, a plan called ‘drying the springs’ was implemented to exclude Islamists from public office and restrict their activities in the public domain. No Islamists were spared, including those who had no known affiliation or those who were affiliated with apolitical groups such as the Tabligh community. A number of charities and social services NGOs were forced to close, including the Abu Dhabi Charitable Association, the Islamic Relief Committee and a number of local Zakat funds. Koranic study circles operating inside mosques were then closed and banned. A Koranic studies summer project, known as Sheikh Zayed Holy Koran Project, which was initiated jointly by the Ministry of Awqaf and the Ministry of Education in 1983, was shut down completely in 1992. In 1994, Jamiat al-Islah and several of its branches across the emirates were also closed.

The early 1990s saw a number of incidents in which Arab expatriates were detained and/or deported for their Islamic leanings. In 1992, a Palestinian suspected of links to Hamas was arrested, detained and tortured to elicit information about Hamas operations inside the Palestinian territories. This case indicated that Abu Dhabi’s security agencies had been doing business with foreign powers that regarded Hamas as a terrorist organization.

This was followed in the mid-1990s by the arrest and year-long detention of Sheikh Abd al-Munim al-Ali, an Iraqi scholar and leading member of the Iraqi Muslim Brotherhood better known by his pen name Muhammad Ahmad al-Rashid. He was never charged or put on trial. His incarceration and subsequent deportation most probably had to do with his perceived influence on the local Islamic movement.

In 1994, Bin Zayed ordered the establishment of a think tank known as the Emirates Centre for Strategic Studies and Research. This centre, intended to be the brain of the modern UAE, had immense influence on most vital institutions, including the Foreign Ministry, the Interior Ministry, the security agency and the Presidential Court. In other words, it was the policy-making think tank for the entire country.

In the meantime, the plan to ‘dry the fountains of Islamic activism’ proceeded at full speed. In 1997, the first two UAE citizens, who worked as Friday imams, were detained. The more power Bin Zayed amassed, the more difficult life became for UAE Islamists.

Sheikh Zayed, who passed away on 2 November 2004, spent the last few years of his life with no real authority. His son had already taken over. The previous year had seen a marked escalation in the campaign against the Muslim Brotherhood in the UAE. This came after Sultan bin Kayed al-Qasimi led a delegation from the Islamic movement that visited Bin Zayed at his request. Bin Zayed told the group that he had decided they could no longer function as an organization. He insisted they had no future and only one option: “Provide us with a list of the names of your associates, disband and live as individuals.”

The group rejected the ultimatum. They defended their record as peaceful activists who did no harm to anyone and demanded that Jamiat al-Islah, which the authorities had closed in 1994, be allowed to reopen.

In response, Bin Zayed ordered seven leading members of the movement to be stripped of their UAE citizenship. One of them was Ali Hussein al-Hammadi, founder of the UAE’s Institute of Administrative Development.

Despite the crackdown and restrictions, much of the UAE’s Islamic movement remained intact and functioning, albeit at a much slower pace. However, as soon as the Arab Spring revolutions erupted in Tunisia and Egypt in 2011, the UAE authorities went on the offensive, arresting, interrogating, torturing and sentencing leading Islamic figures and forcing some of them into exile.

One obvious explanation for this hostility is the personality and mindset of Muhammad bin Zayed himself, who, having seen the appeal of the Muslim Brotherhood’s ideology and the ability of its members to influence government ministries in the past, has long perceived the group as an existential threat.

For the purposes of this article, the writer make use of the testimonies of two prominent UAE Muslim Brotherhood figures who speak in detail about the roots of the problem between the authorities and the Muslim Brotherhood in the UAE: Hasan al-Duqqi and Said Nassir a-Tuniaiji. 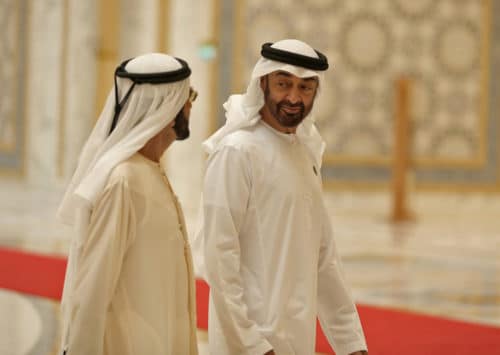