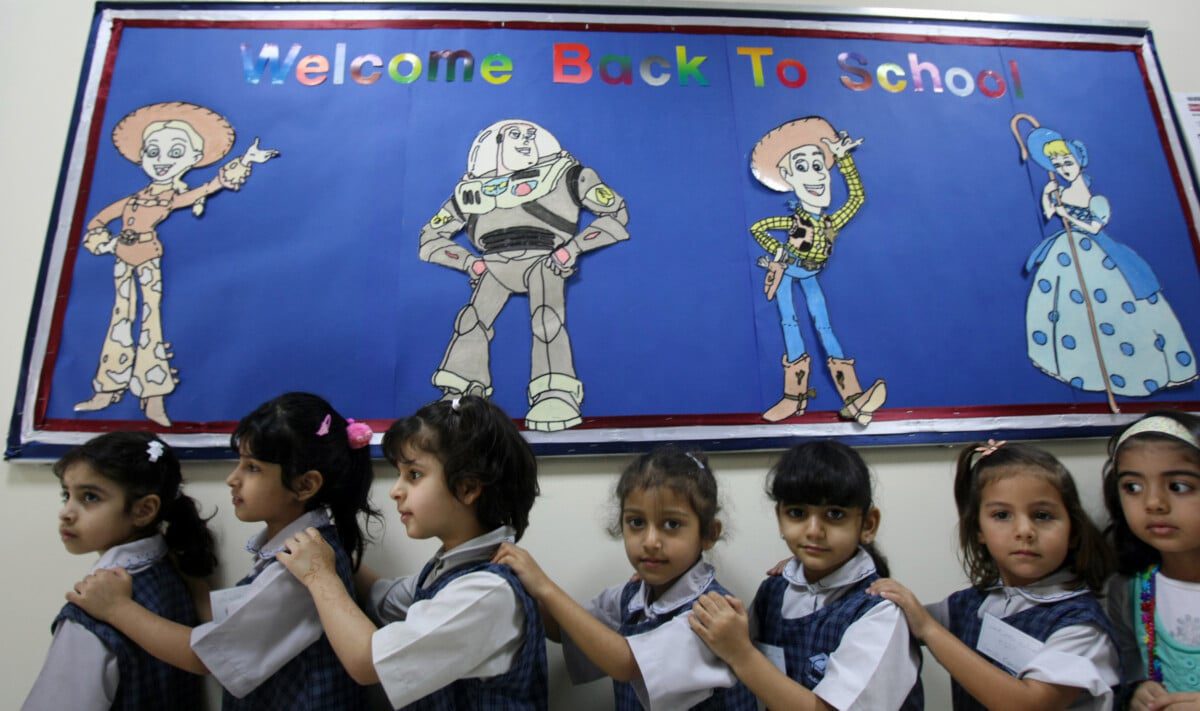 According to the UAE government, the literacy rate is 91 percent for females and 84 percent for males, but the UN estimates the overall literacy rate for the population aged 15 to 24 at more than 90 percent. The UAE’s government has significantly increased funding for education since the 1990s, spending USD 1.5 billion in 2003, compared with USD 67.3 million in 1994. Public education is provided by the federal government free of charge for all citizens, from kindergarten through university.

The UAE has one of the lowest pupil-to-teacher ratios (12:1) in the world. Education is compulsory through the ninth grade, although this requirement is not enforced. Children of citizens attend gender-segregated schools. In 2004 and 2005 some 9.9 percent of students in grades one to five and 8.3 percent of students in grades six to nine did not complete their education. The rate was 9.3 percent in grades 10-12. Overall, 38.1 percent of citizens are younger than 14 years, and 51.1 percent are under 20. There are enormous and increasing demographic pressures on the education system.

Students have the choice of attending private schools, most of which serve the educational needs of expatriate children. These vary in curricula, the background of the students, tuition, and quality of education. Private education, in K-12 schools and in colleges and universities, is one of the fastest-growing business sectors in the UAE. Many employers of expatriate workers offer educational subsidies to cover part or all of the educational costs of their employees’ children. The oldest and perhaps most prestigious of these schools is the American School in Dubai. The largest private educational company is the Indian-owned Varkey Group.

In higher education, there are three main federal institutions catering for more than 30,000 Emirati students:

Private universities offer a wide range of educational opportunities in the UAE. These include, for example, the American Universities of Sharja and the American University in Dubai, Sharjah University, and the Ajman University of Science and Technology. Other less well-known institutions include al-Hosn University and al-Ghurair University. Many branches of international universities have moved to the UAE, especially Dubai, to offer degrees in certain specialties, where they tend to operate from free-zone educational complexes, such as the Dubai Knowledge Village and the Dubai International Academic City. In Abu Dhabi, the Paris Sorbonne and New York University have both established large campuses offering opportunities similar to those to which students have access on their home campuses.

The Ministry of Education has adopted ‘Education 2020’, a series of five-year plans designed to introduce advanced education techniques, improve innovation, and focus more on the self-learning abilities of students. As part of this programme, the government began offering, in all government schools, an enhanced curriculum for mathematics, science, and English from first-grade level, starting in the 2003-2004 academic year. Further support was given to the improvement of education in 2006, providing modernized classrooms, computer laboratories, and other facilities.

Karim Sahib ©AFP
"Ignorance leads to fear, fear leads to hatred, and hatred leads to violence.
This is the equation."
IBN RUSHD/AVERROES (1126 – 1198)
We are a Dutch not for profit organisation (NGO), financed solely by individuals who share our belief in the importance of publishing and disseminating reliable, unbiased information on the Middle East & North Africa region. To represent the voice of the region’s people, we carefully echo the region’s heartbeat by offering fact-checked and therefore credible information.
Your support is greatly appreciated and helpful!
Donate