Standards of health care in the United Arab Emirates (UAE) are considered generally high, as result of significant government spending on this sector. In 2002, total expenditures on health care were 3.1 percent of GDP; in that same year, the per capita expenditure for health care was USD 802. Health care is free only for UAE citizens. Since January 2006, all residents of Abu Dhabi have been covered by a comprehensive health-insurance programme, in which costs will be shared between employers and employees. The number of doctors per 100,000 (annual average, 1990-2003) is 177. The UAE now has 40 public hospitals, up from seven in 1970. The Ministry of Health is undertaking a multimillion-dollar programme to expand and modernize hospitals and other health facilities. Dubai has also developed Dubai Healthcare City, a hospital free-zone that provides international-standard health care and an academic medical training centre.

Cardiovascular disease is the principal cause of death in the UAE, constituting 28 percent of total deaths; other major causes are accidents and injuries, malignancies, and congenital anomalies. In 1985 the UAE established a national programme to prevent transmission of AIDS and to control its entry into the country. According to World Health Organization estimates, in 2002-2003 fewer than 1,000 people in the UAE were living with HIV/AIDS. 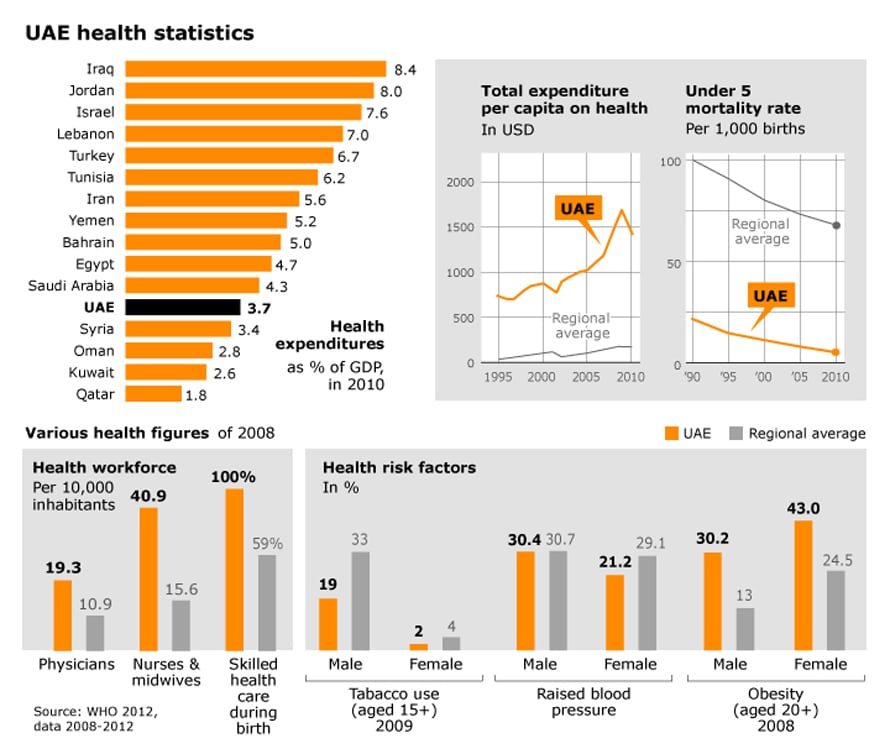