The UAE has a small national population, and its labour market is mostly dependent on expatriate contractual labourers, who comprise about 81 percent of the country’s total population. The total labour force in the UAE is 3.908 million. By 2009 estimates, expatriates account for about 85 percent of the work force. Given the demographic and economic realities, it seems that the UAE will continue to be reliant on foreign migrant workers to meet its rising need for skilled and unskilled labour for a long time to come. Local Emiratis are generally employed in the government and public sectors and in certain private companies that must meet a government quota of hiring a specified percentage of locals, as part of a programme to gradually nationalize the workforce, also known as Emiratization. Nationals make up only 10-15 percent of the labour market.

Population size, age composition, and social factors have a strong impact on the nature and size of the UAE labour force. Most of the labour force in the UAE consists of males, 88 percent of whom are under 45 years of age. One reason for the gender imbalance in the labour force is that the lowest-paid workers are not allowed to bring their families with them. Female participation in the labour market remains relatively small, 16.3 percent in 1999. According to the IPR Strategic Business Information Database (19 October 2005), ‘a recently publicized study by the National Bank of Dubai shows that national women represented 15.2 percent of the overall labour force in the UAE in 2004’. Among these, Dubai absorbed 36 percent of the total number of working women in the country. The share of females in the country’s labour force in 2008 was 15.5 percent.

The unemployment rate is relatively low, usually no more than 4 percent. According to another study, by The National Human Resources and Development Authority (Tanmia), ‘In 2003 an estimated 73 percent of the population was in the 15-59 age-group and the labour force participation[LFP]…rate for the same year, was approximately 61.5 percent, ranging from a low of 47.7 percent for Ras al-Khaima to a high of 68.6 percent for Dubai. Disaggregation by gender shows that the male LFP rate is more than twice that for women, with 2003 estimates of 77.2 percent and 28.2 percent, respectively.’

The workforce broadly reflects the ethnic distribution of the population, which consists of approximately 19 percent Emirati nationals, 19 percent other Arabs and Iranians, 50 percent South Asians, and 8 percent expatriates from Western and other countries. Most white-collar jobs in private companies are held by Western, Arab, and Indian expatriates, the bulk of employees in the service sector are South Asians or from the Philippines, and cleaning and construction jobs are reserved for South Asians, especially Indians, Pakistanis, and Bangladeshis. The latter is the largest single group of workers in the UAE; real estate and construction of public projects are the most extensive part of the economy, and the need for workers is therefore almost insatiable.

The UAE has no minimum wage established, except for some professions, such as teachers and maids/nannies; there is thus a wide range of pay for similar jobs (even within the same organization). Inflation rates and costs of living differ among emirates and cities (Abu Dhabi International Airport now has highest remuneration packages). Despite the lack of sufficient compensation for the erosion of salaries and wages, salaries in the UAE are still better than in many other places. Salary growth in the UAE in 2008 was 13.6 percent (while in the Gulf Cooperation Council as a whole it was 11.4 percent). The UAE’s incremental increase in base pay in 2009 was 2.4-5.2 percent, better than that in other countries, such as the United States (1.9-2.2 percent), Australia (2.0-3.0 percent), and Germany (2.1-2.5 percent). 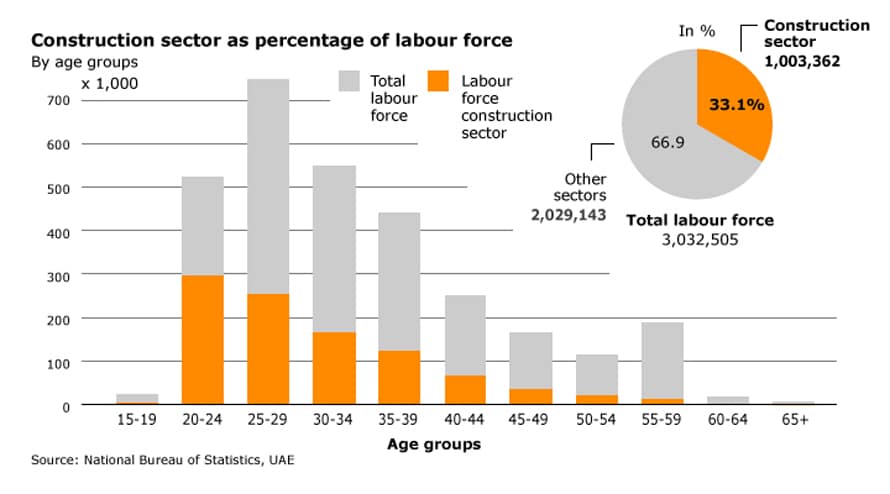 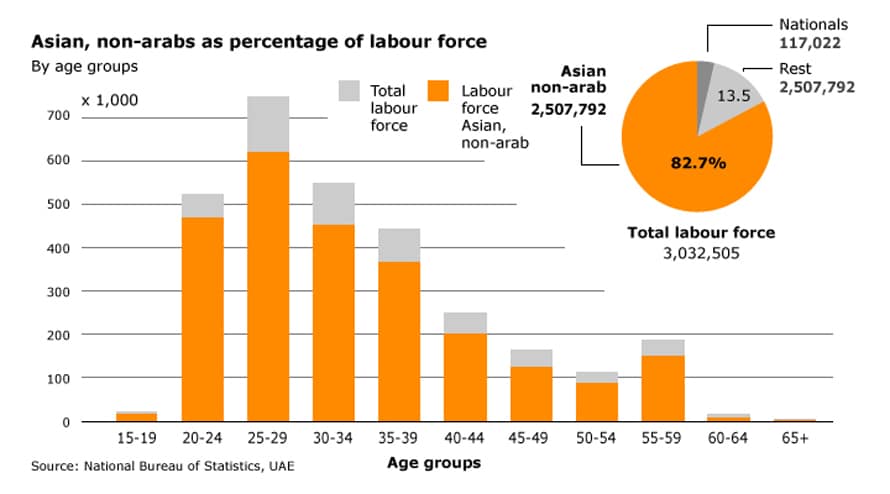