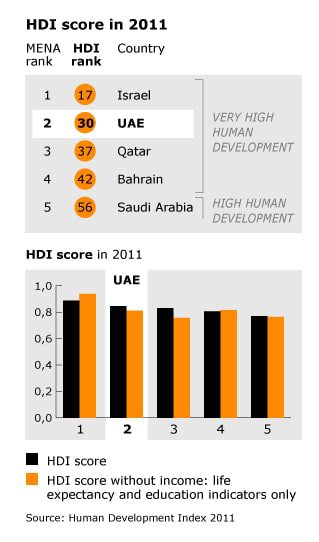 In 1999 the Federal National Council approved legislation providing monthly social-security benefits to national widows and divorced women, the disabled, the aged, orphans, single daughters, married students, relatives of jailed dependents, estranged wives, and insolvents. Also eligible are widowed and divorced national women previously married to foreigners and expatriate husbands of UAE national women. In 2003 the government distributed approximately USD 179 million to 77,000 beneficiaries of social welfare, the largest group of recipients (12,000) being the elderly. In October 2005, welfare payments to UAE nationals, including the unemployed, increased by 75 percent. The recipient population has dropped since 1980, but the per capita cost to the government has risen by 16 percent. Social-security entitlements constitute 1-2 percent of gross domestic product.

Federal government investments and services were reported to be 58 percent of revenues in the 2010 federal budget. The budget allocates 41 percent of revenues to education, health care, and social affairs, such as financial assistance for low-income families. The new budget represents a 21 percent increase over the 2009 allocation for the same sectors.