All
War in Yemen

In Yemen, plagued by civil war and a Saudi Arabian-led military intervention, civilians are the first victims of attacks, blockades, and offensives that have left the country in ruins.

The humanitarian crisis is due to different factors directly provoked by the conflict: extensive damage to infrastructure, economic collapse, internal displacement, roadblocks, and the breakdown of public services such as access to water, electricity, sanitation, and health care. According to UN officials, the cost of food has increased by 35 percent in the last 12 months, and the Yemeni riyal has depreciated by 180 percent. If the trend continues, 12 million people will be at risk of starvation.

On 2 November 2018, the Associated Press published a report describing the lives of people forced to eat According to UN officials to survive in a district called Aslam, partially due to local authorities interfering with aid distribution and resisting requests to set up biometric registration for those receiving assistance. Another family reported eating boiled leaves and moldy breadcrumbs. “We left everything behind. We walked for hours on foot, carrying nothing, not even one riyal, no food or water,” said Yahia Hussein, whose five-month-old son died of starvation.

The report states that the UN and humanitarian groups have provided assistance to more than 8 million of the most vulnerable Yemenis in 2018, a dramatic increase in 2017 when food was reaching 3 million people a month.

In September, the World Food Programme (WFP) called the situation ‘the world’s worst humanitarian crisis. “Yemen is a disaster and I don’t see any light at the end of the tunnel right now,” WFP’s Executive Director David Beasley said at a media briefing during the UN General Assembly, adding, “If we don’t have access then we can’t monitor [and] draw necessary conclusions. We have to assume the worst.”

His opinion is shared by the international organization Save the Children, which works on the ground. 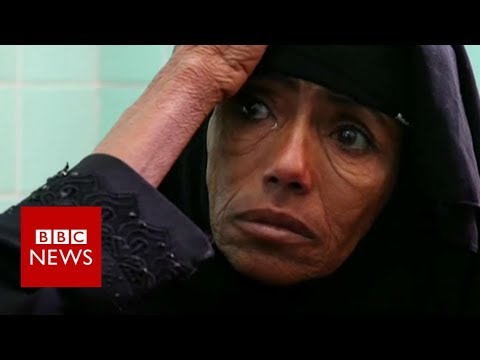 Spokesperson Bhanu Bhatnagar told Fanack, “Yemen remains the world’s biggest humanitarian disaster and the tragedy is that it’s entirely manmade. Widespread disregard for civilian life by the warring parties has led to a massive food crisis, the spread of preventable diseases like cholera and diphtheria, millions of people displaced from their homes due to the fighting, and an economy that has all but collapsed. As a result, families are struggling to meet their daily needs.”

He continued, “Save the Children spoke to a mother of five who was forced to sell her home just to put food on the table; she was faced with an impossible choice: homelessness or hunger. She now lives in a tent on the street. We hear countless stories of desperation, like parents skipping meals so their children can eat or dozens of displaced families living in cramped conditions without access to clean water and sanitation.”

For him, hunger is now the most pressing issue, with an estimated 100 children dying of starvation every day. Save the Children and other international organizations have focused their attention on the port city of Hodeidah, currently the scene of a battle between Houthi fighters and the Saudi-led coalition. Thousands of Yemeni civilians are trapped on the southern outskirts of Hodeidah, through which 70-80 percent of the country’s food and medical supplies arrive. One of the city’s biggest hospitals, al-Thawra, is now only “meters away from an active frontline”, said International Committee of the Red Cross spokeswoman Mirella Hodeib.

“After calls for a cessation of hostilities by the international community only a matter of days ago, this is a deeply disturbing development,” Bhatnagar said. “All parties to the conflict must immediately stop the violence, considering the catastrophic impact of this fighting on the civilians of Hodeidah and across Yemen. Civilian infrastructure and housing are being occupied by armed forces, and health facilities have come under major threat, not only endangering the lives of staff and patients but further limiting the accessibility of health services.”

According to a recent report by The World Peace Foundation at Tufts University in the United States, ‘There is strong evidence that Coalition strategy has aimed to destroy food production and distribution in the areas under the control of [the capital] Sanaa.’ This means that although the Houthis are also responsible for the humanitarian crisis, it is the Saudi-led coalition that is deliberately targeting food and aid distribution in order to put pressure on the rebels.

In 2016, the Yemen Data Project, a group of academics, human rights organizers, and activists, found that a third of all Saudi-led air raids hit civilian sites such as school buildings, hospitals, markets, and mosques. This pattern suggests that the coalition is willing to put the Yemeni population at risk in order to win the war.

As the war grinds on, the internal conflict and international intervention have exacerbated unresolved animosities between Yemen’s different factions. Any peace effort that dismisses the growing divisions and historical grievances is doomed to fail.

In the meantime, humanitarian funds are desperately needed to address the urgent situation of millions of Yemenis. Two billion dollars was pledged for the 2018 Yemen Humanitarian Response Plan (YHRP) earlier this year, but only 65 percent of the funds had been delivered by October.